UPDATE: Though it has only now gone viral in the blogosphere, the ad appears to have been originally produced in 2006.

Germany has been called "the team to beat" during the ongoing Euro 2012 games, but we'd call this anti-homophobia ad a solid victory already.

Showing two soccer plays caught in a more-than-brotherly, post-game smooch, an ad for gay advocacy group Maneo asks, "Would you also beat up your favorite player for this?"

View the ad below, and then scroll down to keep reading: 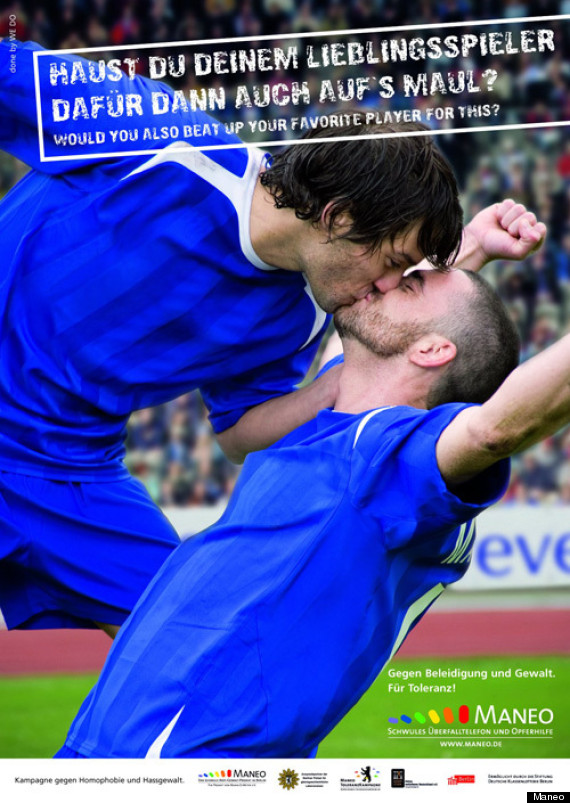 Established in 1990, the Berlin-based Maneo is "the most experienced and best-known gay anti-violence project in Germany," according to its website.

On the field, Germany beat Portugal 1-0 over the weekend, but the Bleacher Report nonetheless deemed the game "a lackluster performance" and "a weak marking" for German players.

View other LGBT-relevant ads, many of which were banned, from around the world below:

Germany's Anti-Homophobia Ad Shows Two Soccer Players In Steamy Kiss (PHOTO)
LGBT Advertisments
1 / 19
Doritos (Part 1)
The first of two scrapped Doritos ads, which <a href="http://www.advocate.com/News/Daily_News/2011/01/25/Gay_Doritos_Ads_Wont_Air_During_Superbowl/" target="_hplink">had been submitted</a> to the company for its "Crash the Super Bowl" contest, shows a man gazing longingly across a fence at his two gay neighbors, who happen to be eating -- surprise! -- Doritos.