BAD AROLSEN, Germany, April 3 (Reuters) - George Jaunzemis was three and a half years old when, in the chaotic weeks at the end of World War Two, he was separated from his mother as she fled with him from Germany to Belgium.

He grew up in New Zealand with no memory of his early years, unaware the Latvian woman who had emigrated with him was not his real mother.

Then in 2010, a letter from the International Tracing Service (ITS) in Bad Arolsen changed his life. He discovered his real name was Peter Thomas and that he had a nephew and cousins in Germany.

"I was astonished, thrilled. After all this time, I was an uncle," Jaunzemis, 71, told Reuters. "You don't know what it's like to have no family or childhood knowledge. Suddenly all the pieces fitted, now I can find my peace as a person."

Yet it took Jaunzemis over three decades of tenacious searching to find the vast archive in this remote corner of Germany where his past was buried.

However, many people are not even aware it exists. It was only opened to researchers in 2007 after criticism that it was being too protective of its material. Despite sitting on a mountain of original evidence, it is still struggling to get the attention academics say it deserves.

Rebecca Boehling, a 57-year old historian who arrived from the United States in January, wants to change that.

"We have a new agenda," said Boehling, who came from the Dresher Center for the Humanities at the University of Maryland, Baltimore County.

"We're sitting on a treasure trove of documents. We want people to know what we have. Our material can change our perspective on big topics related to the war and the Holocaust."

Boehling is the first archive director who is not affiliated with the International Committee of the Red Cross (ICRC), which had managed Bad Arolsen since 1955 with a narrow remit to trace people.

The ICRC handed over the reins to an international commission of 11 countries in January, a step that could help unleash the full potential of the archive for academic study.

Boehling plans to hold international conferences, get foreign students to use the ITS, publish more research and host national teachers' workshops, although she doubts the 14 million euro budget from the German government will stretch that far.

Personal stories about victims, which the ITS can provide in abundance, are a powerful tool in educating young generations, she said. Currently, events hosted by the archive are attended only by townspeople and groups of pupils from nearby.

Located next to a site where Hitler's SS officers once had barracks, Bad Arolsen was chosen for the archive after the war because of its central location between Germany's four occupation zones.

But now its location is a disadvantage. There are no big cities nearby and connections to Berlin and Frankfurt are slow. The town itself, on the northern edge of the state of Hesse, has a population of just 16,000.

The archive is housed in an inconspicuous white building containing clues to the fates of 17.5 million people.

The 25 kilometres of yellowing papers include typed lists of Jews, homosexuals and other persecuted groups, files on children born in the Nazi Lebensborn programme to breed a master race, and registers of arrivals and departures from concentration camps.

It even has a carbon copy of Schindler's List, the 1,000 Jewish workers saved by German industrialist Oskar Schindler.

The Nazis' meticulous record-keeping stopped only when Jews and other victims were herded into gas chambers.

"At death camps like Sobibor or Auschwitz, only natural causes of death are recorded - heart failure or pneumonia," said spokeswoman, Kathrin Flor. "There's no mention of gassing. The last evidence of many lives is the transport to the camp."

The ITS still receives 12,000 enquiries a month and reunites up to 50 families a year, even though the number of Holocaust survivors is dwindling. This tracing work will continue.

Most enquiries come from Russia and Eastern Europe and Boehling welcomes the new phenomenon of grandchildren and great grandchildren, who have more emotional distance from the war, wanting to find out the fates of their relatives.

One major ongoing task is the digitalisation of records which will make it easier for outsiders to carry out keyword searches which had previously been impossible as everything was done in-house with a filing system based on name cards.

Despite its remote location, Boehling says the archive won't be moved. It has become a something of a memorial for Holocaust survivors, like former Auschwitz inmate Thomas Buergenthal who visited the centre in 2012 after getting new information on where his father had perished.

Buergenthal, who escaped Nazi shooting squads, Auschwitz gas chambers and a death march before he was 12, was found by his mother in a Polish orphanage in 1947 through the Red Cross.

"This is my hallowed ground," Buergenthal, 78, told Reuters from his U.S. home.

"These documents are more important for the future than for the past. They will be the common heritage of mankind of what really happened during that period. (They are) what we need to prevent it happening elsewhere in the world." (Reporting by Madeline Chambers; Editing by Noah Barkin and Peter Graff) 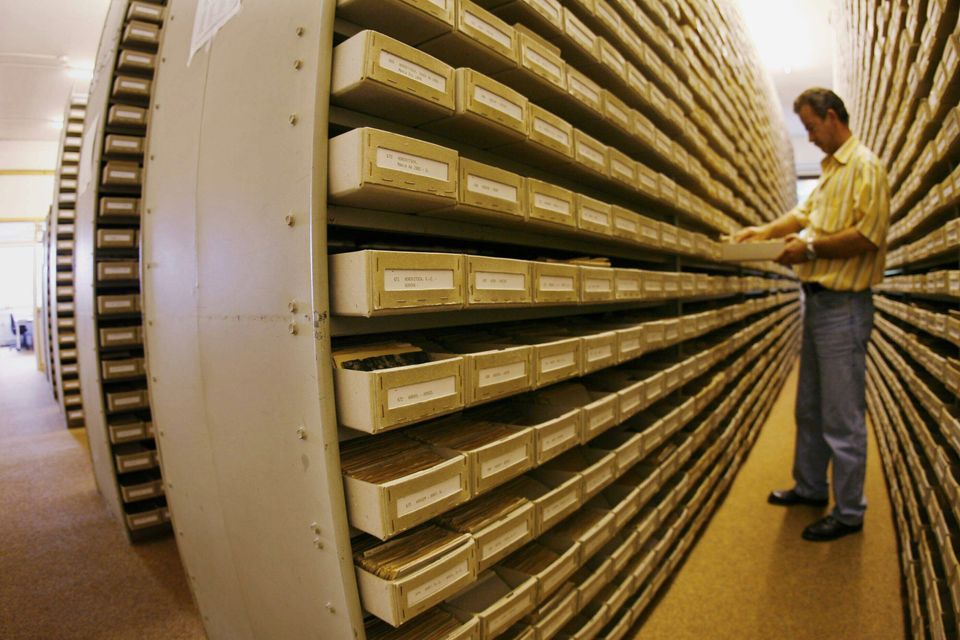