BERLIN -- Everything has already been said by now about the New Year's Eve "Night of Shame" in Cologne. Police received hundreds of complaints from women of robbery and sexual assault by large groups of men, some of them immigrants and even asylum seekers from the Middle East and North Africa. All voices are hoarse after so much indignation and grievance shouted at the top of our lungs. Germany is turning at a rapid pace into a madhouse. Rational discourse has gone on vacation.

As Europeans, we are doing more harm to ourselves than the refugees will ever be in a position to do.

Nothing could be more dangerous for Europe because 70 years of postwar peace and order are at stake. It has been precisely the assertive unilateralism of Germany from the Greek debt calamity to the present refugee crisis that has cemented its role in ensuring that the flag of the European Union is worth not much more to many than the material with which it is woven.

The rest of Europe is in chaos from Poland, Hungary and Slovakia to France and England. They're all building back up their fences and borders. Some want to leave the European Union. Others want no Muslims in their countries. As Europeans, we are doing more harm to ourselves than the refugees will ever be in a position to do.

This morphing of the German mood from the once welcoming arms for asylum seekers to furious demands for punishment and closure can only be addressed through decisive political action by the governing authorities. Yet, one has the impression that the ruling parties in Berlin are either not in control or incompetent. Those with even a dose of political memory will recall the many times they have announced they will bring down the secular wrath of the "full force of the law," only to deliver a slight slap on the wrist and a whisper of warning. Such symbolic actions are now exhausted and no longer work in the circumstances. They only serve to further undermine political order.

It turns out the taking in of refugees who were stranded in Hungary in September was not the beginning of a new migration, but only an iconic moment in a drama already unfolding. Even before September, the number of Syrian, Iraqi and Afghan persons who requested shelter was soaring. The open arms we all remember at the time masqueraded as a forceful act, but, in reality, were only a helpless response to an inevitability. 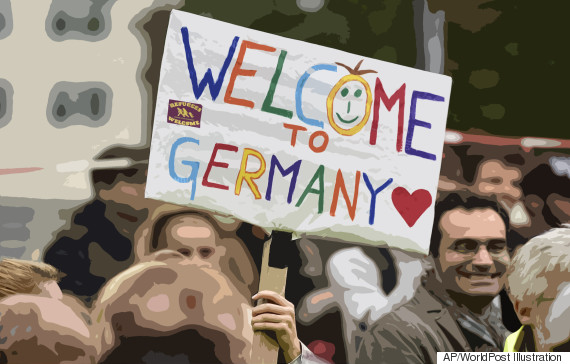 In September, German crowds welcomed refugees. AP/WorldPost Illustration.
The people of Germany are still shouldering the weight of this undertaking. Without the voluntary commitment of thousands of people and the willingness to accept strangers in their homeland and even homes, the burden would have overwhelmed the country. Despite the rhetoric of the local
Christian Democratic Union leaders
, only the largely Catholic southern state of Bavaria, with its proverbial faith in God and first-rate public administration, has managed to combine competence and humanity and cope with the task of refugee registration and accommodation. On every other order of Germany, they would not have managed such a high number of refugees.

What the Germans are now reaping are the results of long years of debates and discussion that led nowhere, including over Islam and immigrants. We started the debate already in the 90s with the self-styled "Caliph of Cologne" who lived on welfare benefits from the "infidel" state which he despised to the core. Designated asylum seekers from the Balkans and elsewhere made places like the Konstablerwache, a central square in Frankfurt, a place where walking through was referred to as "running the gauntlet" already a decade ago. It was an unsafe place not only for women -- though of course especially for them -- but for all citizens, who would rub their eyes in disbelief at the large number of loitering figures. The refugees of the past year have just put the situation more out in the open. Under the glare, the whole miserable situation has now come to light.

If the last refugee would one day return to his or her homeland, the expanse of emotional rubble would remain in Germany. In the recent years of its prosperity, the country wanted to hear nothing from the rest of the world or get involved in its travails. Germany has too long shied away from the world's political and economic developments, as if they would never reach its borders. Drunk on its own success, it has been unable to modernize. This self-righteousness and insistence on the status quo is a nail in the coffin for the future of the country.
Advertisement

This self-righteousness and insistence on the status quo is a nail in the coffin for the future of the country.

One result of living in this bubble of self-satisfaction is that people have been drawn into social isolation. The popular churches have eroded, as have the unions and the political parties. The common good is no longer recognizable. A visit to Munich and Dresden would make it appear as if two universes existed. The events in Cologne on New Year's Eve have turned the rhetoric in Germany on its head. Conceit and complacency have given way to searching self-doubt, as if waking up with a nasty hangover on New Year's Day. We have won nothing, only lost during our haughty years of late. There is nothing encouraging to say at the moment. Nothing. Absolutely nothing.