As they approached the finish line of the women’s marathon at the Rio Olympics on Sunday, Anna and Lisa Hahner, two 26-year-old twins representing Germany, found one another and held hands.

It was the kind of moment that NBC executives live for ― a photo finish showing the camaraderie between two sisters and training partners as they came in 81st and 82nd among the world’s best runners. Anna registered a time of 2:45:32, and Lisa a time of 2:45:33.

“I invested all I had, and 300 meters before the finish line, I was next to Lisa,” Anna said afterward. “It was a magical moment that we could finish this marathon together. We did not think about what we were doing.”

The decision made sense. They had no chance of medaling at that point. And considering the countless hours the siblings had dedicated to training just to get to this moment, why not enjoy it a little bit?

Yet some in Germany only felt outrage that the two athletes had the audacity not to do everything possible to gain an edge over a competitor, even if that person was a training partner, sister and twin.

“If the Hahners jointly want to cross the finish line, beaming and holding hands, then they can ― in the countryside home run in St. Pölten or the Miss-Braided run in Solingen,” said German sports columnist Lars Wallrodt.

Thomas Kurschilgen, sports director of the German Athletics Federation, expressed similar anger, implying that the twins might have intentionally given less than 100 percent so they could hold hands, or something.

“The Hahner twins, Lisa and Anna, ended their Olympic marathon race more than 21 minutes behind the winner, [and] more than 15 minutes [off] their best performance, [in positions] 81 and 82,” he said. “It looked as though they completed a fun run and not [an] Olympic [race].”

If the Hahners jointly want to cross the finish line, beaming and holding hands, then they can — in the countryside home run in St. Pölten or the Miss-Braided run in Solingen.

“Their main aim was to generate media attention,” he later told The New York Times. “That is what we criticize.”

On their Facebook page after the race, the Hahners indirectly addressed this criticism. “Number 81 and 82. Definitely not what we had hoped for. Were we satisfied? No. Crossing the finish line was nevertheless one of our greatest sporting moments,” they wrote in German. “All those who have no interest in our page are welcome to unlike it.”

The Huffington Post tried to figure out if Wallrodt, the sports columnist, or Kurschilgen, the sports director, have ever placed 80th or better in an Olympic marathon. We were unsuccessful. 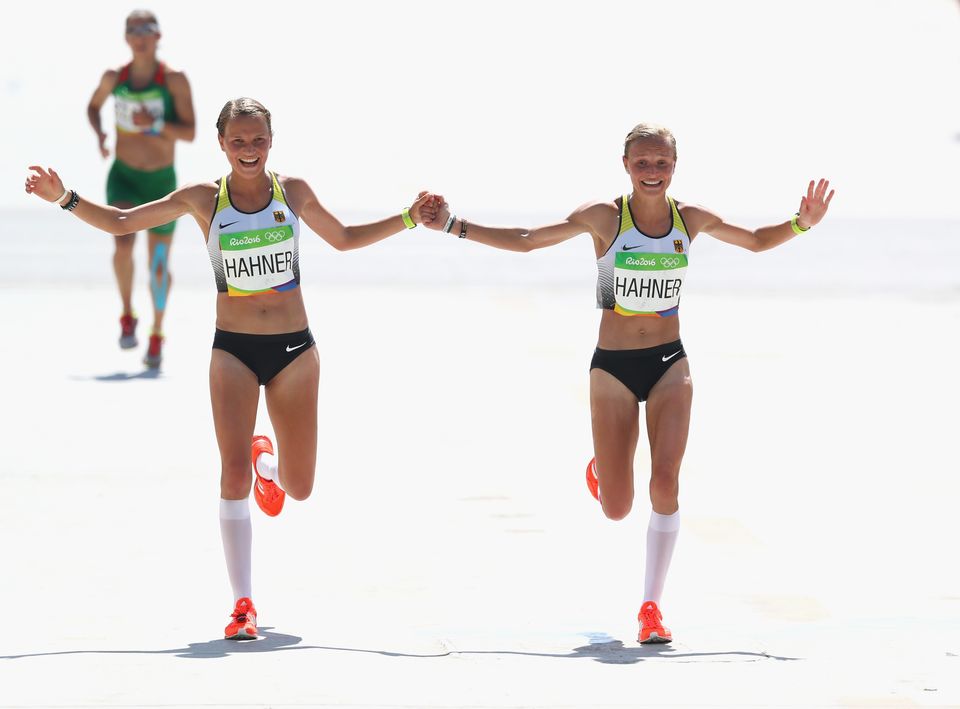 1 / 7
RIO DE JANEIRO, BRAZIL - AUGUST 14: Anna Hahner (L) of Germany and her sister Lisa Hahner reacts as thei approaches the finish line during the Women's Marathon on Day 9 of the Rio 2016 Olympic Games at the Sambodromo on August 14, 2016 in Rio de Janeiro, Brazil. (Photo by Alexander Hassenstein/Getty Images)
Alexander Hassenstein via Getty Images