Germany on Friday approved a new quota that will force some of Europe’s largest companies to increase the number of women in their boardrooms to 30 percent by next year.

Women claim just 15.5 percent of boardroom seats on companies listed on the S&P 1500 -- an index of U.S. stocks -- fewer than the combined number of positions held by men named John, Robert, William or James, according to a report from Ernst & Young. 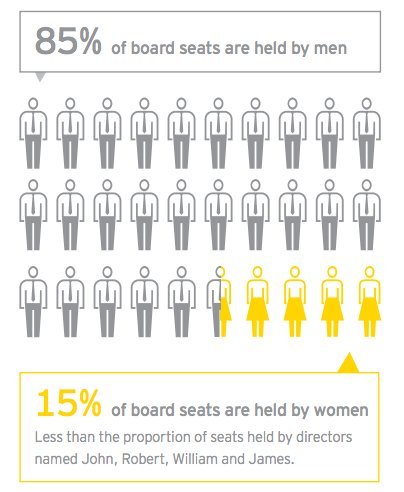 “You have to be sparing with the word ‘historic,’” Justice Minister Heiko Maas said of the decision, according to the New York Times. “But I think today we can apply it.”

He called it the “greatest contribution to gender equality” since German women won the right to vote in 1918.

The Ministry of Labour and Social Affairs did not respond to a request for comment on Saturday.

The move marks the latest in a string of such quotas. In 2008, Norway became the first country to enact a quota of 40 percent, threatening to dissolve publicly traded companies who did not comply. France, Iceland and Spain soon followed. The Netherlands and Malaysia set non-binding targets of 30 percent. Australia, Britain and Sweden have threatened to enforce quotas if companies not voluntarily give more corporate supervisory seats to women.

Some say such quotas fail to empower women in management positions. None of Norway’s 32 biggest companies has a woman as chief executive and just 5.8 percent of general managers at its public companies are women, according to the Wall Street Journal. Other critics say it does little to close the gender wage gap and empowers less experienced women who amount to little more than "window dressing" in a room full of seasoned businessmen.

"Board quotas may seem like a convenient shortcut to workplace equality, but they are not -- nor are they a long-term solution," Carrie Lukas, managing director of the nonprofit Independent Women's Forum, wrote in an op-ed published last December. "A distraction at best, they may undo women’s historic gains by suggesting that we cannot succeed on our own."

Still, Germany is Europe’s largest and most powerful economy, with companies such as BMW, Deutsche Bank, Siemens and Volkswagen. Some of the country's workplace policies could serve as models for other countries.

Wolfsburg-based Volkswagen, the world’s second-largest automaker, has begun offering apprenticeships at its plant in Tennessee -- similar to the vocational training many German students receive -- in hopes of cultivating more highly skilled factory workers, of which there is a shortage in the U.S. Last August, Germany's labor ministry began work on potential legislation that would bar employers from emailing workers after hours.

Women are guaranteed six weeks of maternity leave, and it’s illegal to fire a female worker for becoming pregnant. It’s also illegal to require a worker to perform tasks that could endanger her pregnancy, such as lifting and carrying heavy objects or handling toxic or radioactive material.

It probably helps that Germany is led by Chancellor Angela Merkel, the most powerful woman in the world.