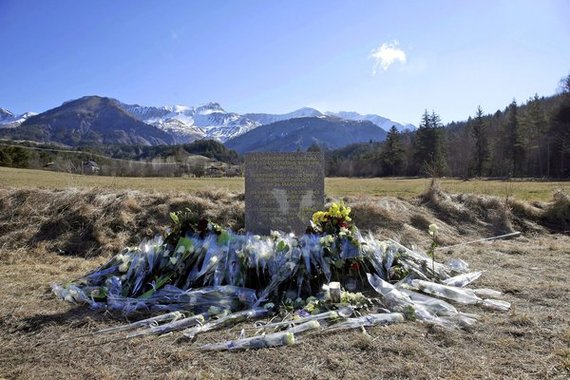 The story of 27-year-old Andreas Lubitz, co-pilot of Germanwings Flight #9525 who, reportedly, resolutely defied medical letters not to work because of illness and took 150 people, including himself, to a brutal end will surely ignite yet another round of confusion, consternation, and pitched comment about what to do:

- About the dangers posed by mental illness -- including the 40,000 suicides (and rising) annually in this country and the 22 American veterans who die at their own hands every day;

- About the horrific, episodic violent events that rock our minds and disrupt the peace of our families and communities, which include Adam Lanza (Newtown, Connecticut); James Holmes (Aurora, Colorado); Jared Loughner (Tucson, Arizona); Elliot Rodger (Santa Barbara, California); Seung-Hui Cho (Virginia Tech, Virginia); and Andreas Lubitz. What may seem like random acts of violence are not so random;

- About the inestimable and disproportionate human and economic toll taken by that very small percent of individuals whose serious mental illness impairs their capacity to recognize they are sick and to take steps to ensure their wellbeing and that of their communities.

I fear that Lubitz's story will unleash a fresh round of fear and vitriol regarding people with mental illness. I fear that simplistic reactions known not to work (like "lock them up and throw away the key") may again be seen as attractive answers to problems whose solutions can be understood but difficult to achieve. I fear that work towards protecting the public's safety will be lost in the fog of the war of words that are already descending upon us in the wake of this latest tragedy.

Andreas Lubitz does not fit the familiar profile of a person with serious mental illness who goes on to kill others and (typically) himself. Lubitz reportedly was not a loner, did not have a long history of isolation and alienation from family and friends, did not have an undetected mental illness (and he was presumably in treatment), and maintained at least a patina of competence and responsibility. As far as is known to date, he was not a terrorist. He apparently left no notes to explain his actions or take responsibility for the lives he took.

We thus face a different set of problems to tackle if we are to find direction from the wreckage of Flight #9525 and the fate of its passengers and their families.

I want to propose two paths for protecting the public as well as protecting people with serious mental illnesses. They call for real time performance information on those entrusted with our safety.

First, we need to revisit the limits of privacy, balancing both individual and community rights. Second, we need to consider measures that could reduce the risk of another deadly scenario, especially the potential for employing technological advances to identify problems before it is too late.

Privacy often takes the quality of a hallowed right, especially in this country. But privacy is not universal or unlimited. Privacy, particularly in mental health, can have both its needed place and its proper limits, especially when circumstances may be life-threatening. Those whose service involves our safety have that as their primary and overriding responsibility. Regular, random drug testing is a common example for many service employees whose work involves the health and safety of others.

Yet organizations whose employees are directly responsible for the public safety -- like doctors, police, firefighters, bus drivers, nurses, and pilots -- usually are not contacted when an employee is deemed medically not safe to work, as we painfully see with Germanwings (and Lufthansa). Has privacy trumped public safety? Would not the public safety be served if select groups of service workers with jobs that can impact safety and are in treatment for a medical condition (including psychiatric, neurological, and certain chronic illnesses that can impair cognitive functioning) consent to having their doctor report to their employer should they be determined unfit to work? Andreas Lubitz would not have flown that day were that the case. Impaired physicians and nurses would not endanger their patients were that the case. The right to return to work when fit would have to be guaranteed. Safety must always be the first priority, and the privilege of serving others should rest on that principle.

However, professions, mine included, do not have a stellar record of protecting those they serve. Do we have reason to believe that professional organizations or corporate entities can be trusted to protect their clientele? Self-interest, concerns about liability, and economic forces too commonly eclipse the integrity of purpose that is their mission.

R. Buckminster Fuller did not believe pressure could change people or organizations when he said, "You never change things by fighting the existing reality. To change something, build a new model that makes the existing model obsolete." We need something besides the imposition of external regulations and reporting requirements to achieve real and lasting change. Advances in technology and data systems may now allow for a new models of monitoring that heretofore were not possible.

We can, thus, today pursue a second, and parallel, path that adds clear measures to monitor all individuals with direct responsibility for others, such as the service personnel mentioned above and others whose work places the public safety in their hands. Here technology may offer feasible solutions that in the past were too intrusive and burdensome.

In NYC, for example, a combined multi-year effort by NYS and NYC monitored a very high-risk group of individuals with serious mental illness using administrative data to identify when they failed to attend their medical appointments or pick up prescribed medications, or had a sudden re-emergence of acute illness as evidence by ED or hospital admissions. This work focused on the clinical providers, not the patients, responsible -- where data alerted everyone involved about who was not doing well. Responsibility then lay with the provider organizations to act when patients were not succeeding. This initiative now is evolving into more accountable care organizations to ensure that those in trouble are reached and engaged.

This high risk initiative (or others like it) is, however, far too limited and focused on individuals with known histories of serious problems. That appears not to be the case for Lubitz or many others who have flown below the radar of responsible monitoring. What could work are real time measures of the performance of service personnel, agreed to by those given the privilege of bearing the responsibilities they do. Wearable devices far beyond Fitbit are emerging that can track and report changes in social behavior and functioning that correlate with impaired performance (often the result of illness) thereby alerting service organizations (as well as caregivers and health professionals) that a person's capacity to do his or her job may be compromised.

We don't want someone with a fever of 105 degrees operating heavy machinery or flying a NASA mission. We don't want someone whose cognitive capacities are transiently impacted by a mental (or other medical) illness or drug use driving our bus or operating on our abdomen. When someone is impaired, he or she needs to stand down, or not be allowed to work, until their functioning is again normal, as evidenced by real time performance measures. Perhaps a universal approach used for all workers the public relies upon for safety even could avoid the traps of diagnosis and stigma we see when a mental disorder limits functioning.

We need professions and service organizations to invite innovation from technology companies researching human performance measurement to build, test, and promote solutions that serve the public safety. We can find answers that balance individual liberties with collective needs, that prioritize safety, and that create the expectation that with certain privileges comes accountability for performance.

Regaining the public trust and professional pride are possible. But we will need a different glide path than that we have been on. We can use Flight #9525 as an impetus and a reminder that delays only invite yet another collective grave and failure of will when prevention could be possible.

The views expressed here are entirely my own. I take no support from any pharmaceutical or device company.