BERLIN (AP) -- Mild temperatures melted record December snowfalls across Germany, causing rivers from the Rhine in the west to the Oder in the east to burst their banks, flooding fields and towns, turning streets into waterways, and leaving one person feared dead. (Scroll down for devastating photos)

Officials were watching flood levels on the Rhine river in the city of Koblenz on Monday that were expected to peak at 25 feet, 4 inches (7 meters, 70 centimeters), and some low-lying parts of the city were under water.

Commercial shipping on the Rhine, which leads to major Dutch ports on the North Sea, was banned for a roughly 90-mile (140-kilometer) stretch, roughly between the cities of Bingen and Cologne, the Bingen Water and Shipping Agency spokesman Martin Mauermann said.

Further south, the Moselle river in the western German Rhineland-Palatinate state peaked on Sunday, after flooding several villages in the wine-growing valley. In the village of Zell, some shuttled through the historic city center's narrow lanes on motorboats, passing closed restaurants and inundated houses.

An official in Koblenz, where the Moselle joins the Rhine, said the city was well prepared to cope with the swelling rivers. "People here are used to it. It happens every year," firefighter spokesman Norbert Gras said. "There's no sense of catastrophe."

Officials also are carefully monitoring the Oder river on Germany's eastern border, although waters there appear to be receding. Police in eastern Thuringia state said a 59-year-old man has gone missing after his car was carried away on a flooded road. Police fear he drowned in the waters of the swollen Unstrut river. 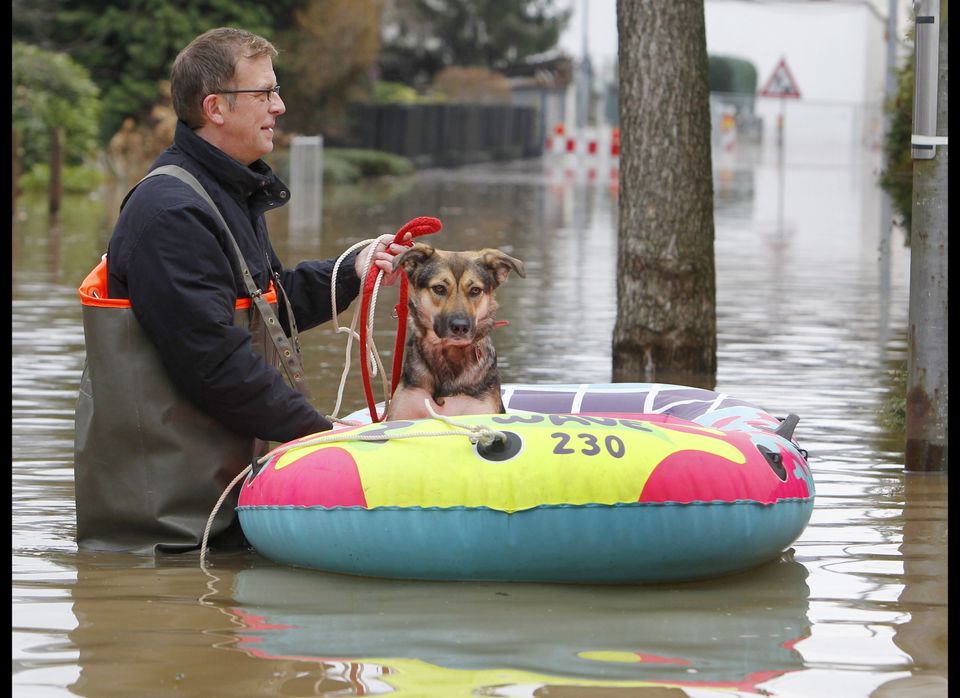 1 / 9
A Koblenz resident guides his dog in a small rubber boat.
AP