Art helps us to understand - at times only retrospectively - how events of great importance have left their mark on the lives not only of artists, but have also informed the collective consciousness of whole societies. Art is a seismograph of experience which often reveals the common intersections within cultures. Looking at how this cross-pollination can enrich our cultural experience in Los Angeles is to travel without ever needing to get on a plane. This week, we are landing in Germany.

We made several stops in LA this week to report on work from contemporary German artistbeing made on our local streets. The following events are essential to anyone wanting a peek into the window of what is being created over in Europe, and learn about some key artists in the international art scene. We were fortunate enough to interview and photograph some of the artists involved in these events. 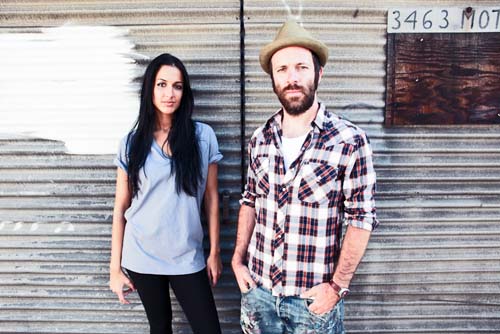 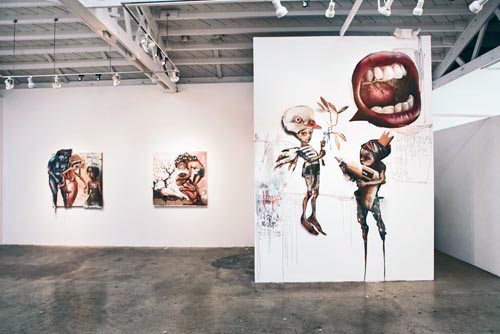 This is not your first time in Los Angeles. Will you be working on any mural pieces while you're both in this city?

"Hope´s Reply" is our second show in LA and just like the first time we are leaving you with a little Herakut piece on a wall that we painted downtown. I am also working on some more murals for the Goethe Institute. I´m doing those with Case and Rusk from my graffiti crew MaClaim.

Germany has a fantastic reputation for fostering a rich contemporary art scene. How does America, and especially California, fare in its international reputation for urban art among artists like yourselves?

You invented Lowbrow! We feel a strong connection there. Maybe even stronger than with what Europe has to offer. What comes out of the European art scene tends to take itself dead-serious. We like meaningful, we like dark, but we do like a little humor to go with that.

What is it that interests you about doing street art? How does your work relate to hip hop culture (if at all)?

Hip hop culture is our home base. It is where we started from. It combines those four (what four?) - or some like to say five - artistic elements, with graffiti being one of them. We have painted at so many hip hop festivals, performing in front of huge crowds while there were beat-boxing contests going on around us, or we would be painting the backdrops of breakdance competitions. I guess, without hip hop culture there would be no Herakut.

We would always describe our wall pieces as one of the far ends of graffiti. But what it all comes down to is this: walls are just so much bigger and cheaper than canvas; it is much, much nicer to use spray-paint outdoors than indoors, and last but not least, working on the street always gets you an immediate response to what you are doing - which can be tough but is probably the reason why we have become artists in the first place.

Your figures have this surreal/otherworldly quality to them, somehow based in a realm of fantasy, with somber expressions...Are these characters created from both of you equally, or one more then the other? What qualities do each of you bring individually to the collaboration?

I like to say that I do the searching to find the right lines, build the skeleton of any figure or composition. Akut then gives this mess that I have constructed a nice and tangible texture. He is responsible for the entire photorealism part. It is basically his work that bridges between dark and beautiful.

We communicate through our pieces. We share our thoughts with anyone interested. It might not look like the predominant element, but it sure is important. It is another tool to transport a message. In fact, any piece of Herakut artwork has had its roots in a dialogue between the two of us. So, every piece starts off from words. 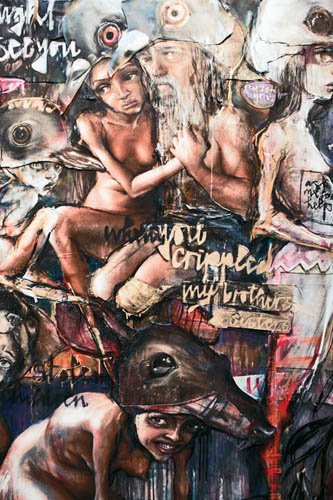 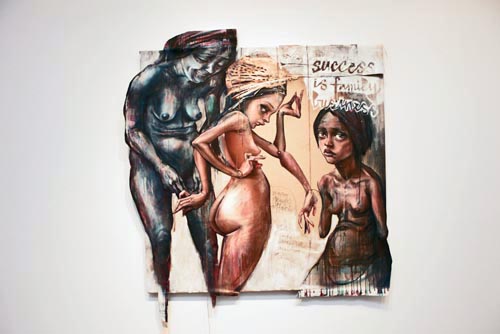 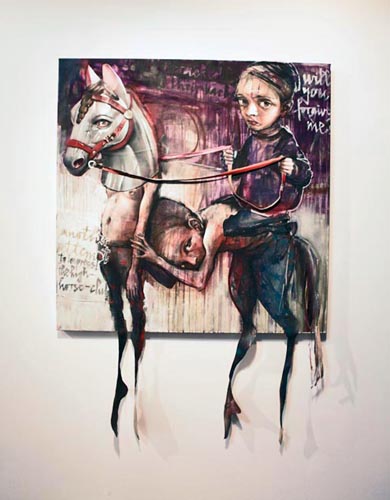 The next two events were in conjunction with one another and in collaboration with LA ART MACHINE, Goethe Institut and supported by the GERMAN FOREIGN OFFICE 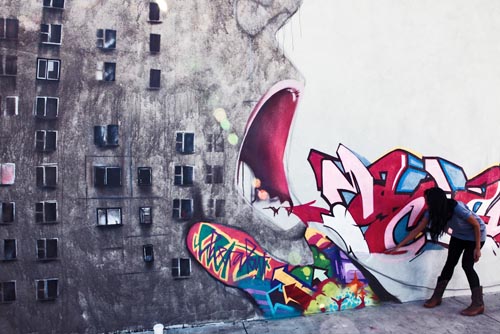 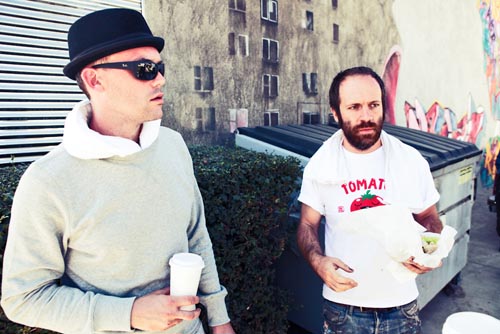 What is your interest in bringing German Urban art to Los Angeles?

In the context of the Vox Humana program, I'm interested in what is happening globally with street art and public murals. Plus I'm having a love affair with Germany these last few years. This is an international effort, which fits perfectly with the flavor of Los Angeles as a city of the world. And it's what I personally want for my hometown. It's what I want to see when I drive through the streets of L.A. so in essence, with Vox Humana I'm taking action to help create the world I want to live in.

Can you speak a little about how LA Art Machine is involved with Stroke Art Fair in Germany?

The relationship with the STROKE Urban Art Fair started about three years ago before either the L.A. ART MACHINE or STROKE had fully surfaced. I was living in Berlin and stumbled into Intoxicated Demons, a cool little gallery in Kreuzberg off of Oranienstrasse. That's where I met Marco Schwalbe, the co-founder of STROKE. He was a super cool cat and we got talking. Both endeavors were real do-it-yourself projects, you know make it happen hell or high water. I really respected that in Marco. He's a great curator and designer and a hard ass worker. So, at the beginning of this year we formed a partnership to help bring this hugely talented and exciting but horribly disorganized global artistic movement into focus. Now we share artists, organize events together, and cross promote on the two continents.

Why did you choose to bring together an acclaimed LA street artist (Retna), an infamous rebel borderline journalist from Germany (Tom Kummer), and the photorealistic German graffiti crew MA'claim? What are the topics that you will approach in this panel discussion?

With MA'Claim, Retna, and Tom Kummer it's a conversation about the subversive arts. Graffiti, as you know, is overtly and inherently subversive as it constantly challenges corporate and governmental control of public visual space. On the other hand, Kummer is probably the most controversial writer in contemporary German print-media history. He's the progenitor of conceptual journalism and literally a major troublemaker. He's brilliant and he's a punk.

What can we expect to see on Saturday at the Goethe Institut?

What is happening at the Goethe Institut is really interesting. Stefan Kloo from the Institut, who has been photographing graffiti in L.A. for years and who loves street art, found a way to make this project happen and I think he's been really smart about it. The event on Saturday covers a lot of ground. It's a live art performance by MA'Claim. They will be working on large-scale canvases for the better part of the day and then that will be followed up by a panel discussion and a book signing. So you have the entertainment and artistic part of graffiti art supported by a rich conversation about the subject of street art, public visual space, and other social and political issues surrounding what these guys all do. I'm really looking forward to the conversation. 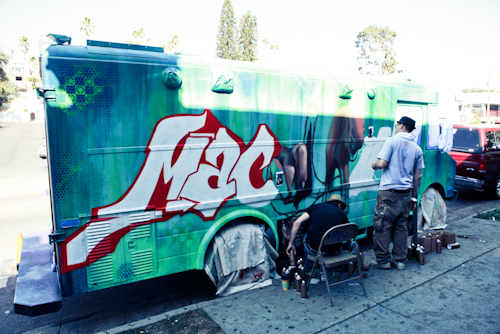 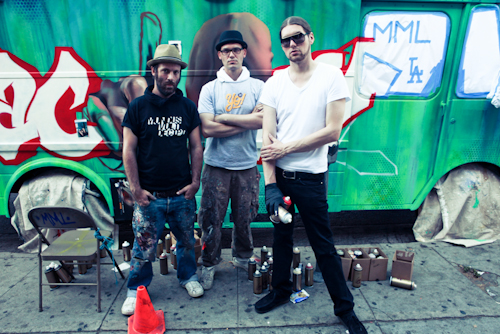 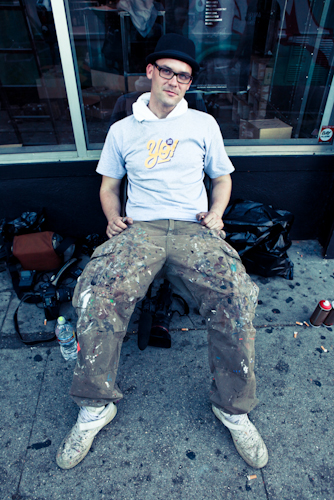 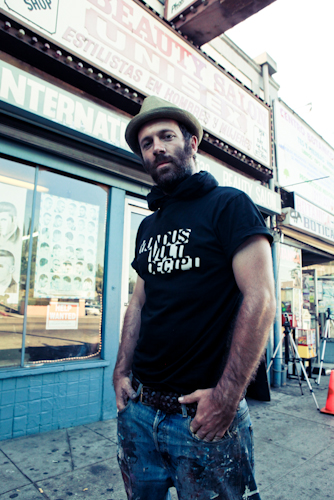 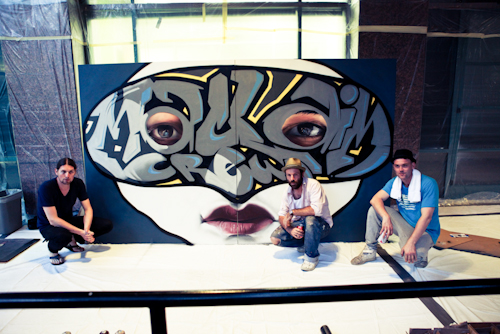 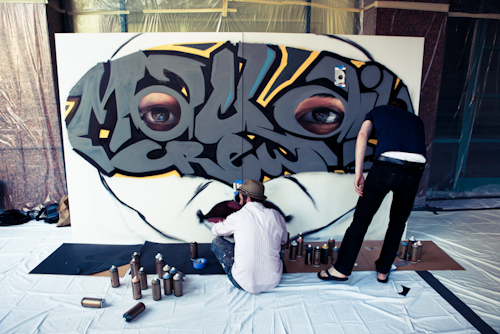