Not long ago, the world was looking upon our nation with admiration. During the soccer World Cup in 2006, Germany seemed like a cheerful university dorm; a place that welcomes strangers, where everybody can party exuberantly. In the following years, Germany even turned into a role model. While our European neighbors slid into recession, jobs were created here. Young people from all over the world came, because the future looked brighter here. But then came the summer of 2015.

Suddenly Molotov cocktails were flying into asylum-seekers' hostels. Within the first six months of this year, there have been around 200 attacks on refugee hostels. In July and August alone, the Federal Criminal Police Office reported 131 similar attacks by right-wing extremists. Additionally, verbal and physical attacks against foreigners in subways are increasing, and in one especially gross reported case, Nazis publicly urinated on the kids of a refugee family. Hundreds of them demonstrate in front of refugee shelters like in Heidenau, Saxony, even yelling at Angela Merkel during her visit to one of the shelters, calling her a "traitor to her people," an especially vile term of Nazi propaganda.

It is shocking that something like this should happen in Germany. Because it has nothing to do with the nation that many of us are experiencing daily. It doesn't fit the cosmopolitan atmosphere of bigger cities like Hamburg, Berlin, Cologne and Munich.

This open, increasingly loud hatred against foreigners is mostly a small town phenomenon -- places with high unemployment, limited opportunities and a dangerous right-wing scene, in which the attackers are protected by others. One suspect in a recent attack, in which a refugee shelter was torched, is a fire fighter. A little later he helped to extinguish the fire. 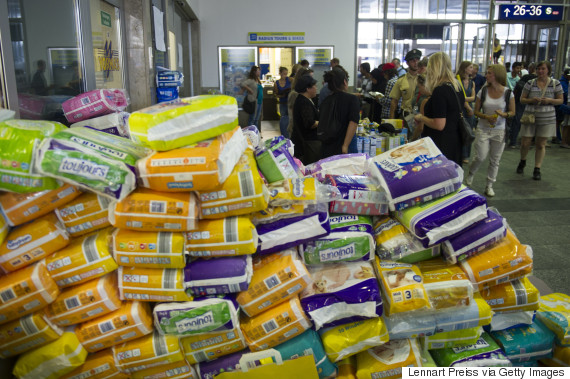 For years, media and politics have overlooked and underestimated how powerful the right-wing movement has become in some parts of Germany. They have ignored the fact that small towns in the East German states are "culturally controlled almost entirely by right-wing extremists": with murals in the style of the Nazi period, references to Hitler's birthplace, and an atmosphere of fear exaggerated by the far right extremists. In these towns, the right-wing culture dominates everything from high school to the carpenter's shop.

But there are also attacks on asylum-seekers' quarters in the South and West of Germany. Therefore, the radicalization of parts of German society is not a purely East German phenomenon. The Federal Office for the Protection of the Constitution understands this as a threat, a new form of right-wing terrorism.

Sometimes, I just want to wake up from this nightmare. Is this really the country in which I want to raise my child? It is a country that I haven't known until now? My wife comes from Great Britain and has Indian roots. She came here and received a warm welcome from everyone -- like thousands of other immigrants. In our life, this other, ugly Germany didn't exist before.

Now, a small dissatisfied group has dismissed a broad cultural understanding: That, being one of the richest countries on earth, Germany is obliged to help people in need. 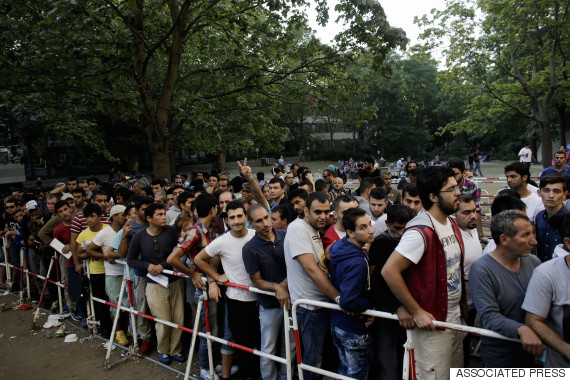 People line up to wait for registration at the reception center for refugees and asylum-seekers in central Berlin , Tuesday, Sept. 1, 2015. (AP Photo/Markus Schreiber)

That is something we need to talk about. Forty percent of refugees coming to Europe, come to Germany. According to recent estimates of the government, it will be 800,000 people this year. That equals the number of people living in Frankfurt, Main. Many Germans are scared of that.

Many of these "concerned citizens," as they like to call themselves, are not concerned about the refugees. They worry about themselves. They are scared of economic decline, scared of old age poverty. Scared that something will be taken away from them.

And now they have found the reason for their fear: Refugess that come to Germany to take the last couple of Euros and benefits away from them.

The preachers of hatred and extreme right parties, which have mostly flown under the radar until now, use this fear. They have found their audience. They use the Internet to goad on the scared masses. They spread fake articles about refugees, who allegedly come at German school girls, only to later exploit our social system. According to these hatemongers, politicians and the press lie, so they construct their own reality. Following their sick logic, there is a "will of the people" that justifies violence against foreign fellow citizens. Therefore, we are not only experiencing one of the worst waves of right-wing terror since World War II, but also a gruesome peak of xenophobic propaganda.

To be clear: These people are a minority. There is no powerful anti-immigrant party in Germany either -- like there are in Denmark or Sweden. However, this could change, if the dangerous and vocal minority became more powerful, due to a lack of opposition. For a long time, the majority of Germans has been looking on in disbelief. Like Chancellor Angela Merkel, who has been silent about the attacks against asylum seekers for way to long, many were hoping that the rage would pass like a heavy thunderstorm. To the contrary. The silence of the majority worked like a combustive agent. Suddenly, the minority were feeling like the majority. In the beginning, not enough people spoke up in this heated debate. The Huffington Post Germany was one of the first media outlets to take a clear stance: In a big feature story, 200 politicians, actors, professors, students and retirees stated: "Welcome, dear refugees. We're glad you are here."

Whoever dares to take the refugees' side will really get to know this country's ugly side. We were pelted with emails, Facebook messages, and phone calls. They spoke of "dirty riffraff," "gas chambers" to solve the refugee problem, stating that refugees will bring nothing but "violence and diseases" to Germany.

But finally, a counter movement is forming now.

Students, actors, managers, bloggers and politicians are collecting clothing donations, getting involved in provisions for the refugees and using social media to oppose Nazi stupidity with strong arguments.

They see the situation for what it is: An extreme challenge for all of us.

Even the tabloids dispel myths about refugees. Only a couple of years ago they poisoned the atmosphere with questionable "truths" about immigrants.

But this can only be the beginning. Next, we will be faced with an enormous integration challenge. By now, this has also dawned on Angela Merkel. In Monday's press conference, she compared the integration work of the coming years with the effort invested in "building up the East" after the German reunification.

In the coming months and years, we have to re-integrate two minorities at once: On one side, there are the refugees staying with us long-term and on the other side are the "concerned citizens," representatives of the culture of fear.

It's likely that the second group will be more difficult.

This is a historic challenge. How we master it will decide on where this country will be headed. It all boils down to the question: Does Germany want to remain the cheerful World Cup country that many of us would like to live in?

This blog post first appeared on HuffPost Germany and was translated into English.