BERLIN -- Germans went to the polls last Sunday -- only in one state, Hesse, and it was only a local election. But it was a taste of what is to come in state parliament elections taking place in three of 16 German states in a couple of days.

It does not look good.

The new right-wing party Alternative for Germany raked in double-digit results at the Hesse voting booths, taking third place behind German Chancellor Angela Merkel's Christian Democrats and the Social Democrats, and ahead of the Greens. AfD had strong results in every major city in the state. The forecasts for elections in three other states likewise suggest it will get between 9 and 19 percent of the vote. The prospect of the AfD pulling even with or perhaps even surpassing the Social Democrats, the oldest party in Germany, is becoming real.

"It's terrifying," a chairwoman of the Social Democratic Party told a German broadcaster.

Anne Applebaum commented that the West might be only several election cycles away from its end. She was referring specifically to the election victory of the extreme-right Marine Le Pen in France, the possibility of Donald Trump becoming the next president of the United States and the referendum in England over leaving the European Union. What she did not include in this panopticon of horror was Germany's relapse into barbarism. 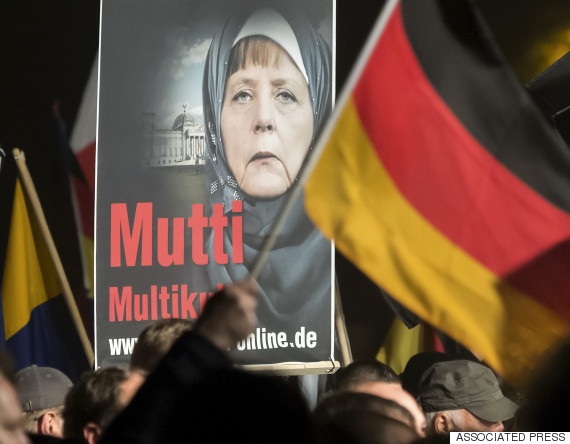 Thousands of anti-immigration demonstrators organized by the AfD in Erfurt, Germany on Oct. 28, 2015. (AP Photo/Jens Meyer)

In fact, of all the European countries, Germany has had the longest streak of keeping right-wing radical parties out of seats in state parliaments or in the Bundestag. The experience of the Third Reich made several generations of Germans wise.

That's over now. The right never went away -- that's something one must understand. It just had no real authority in public discourse. But the refugee crisis changed that.

Vague fears in the West -- of globalization and digitization, of change in the working world through artificial intelligence and the Internet -- have resulted in a wish for things to remain the same. For the inhabitants of the richest countries on Earth, the fear of change has been funneled into a fear of refugees crossing the continent.

The refugees are dehumanized by the right in this discourse. The head of the AfD demanded, in all seriousness, that we shoot at refugees who come to the German border. There is public outcry over this discourse, but the tone of the response has been different than usual, and the voices of those saying "they're right" or "they should be allowed to say that" are louder than they would have dared to be several years ago.

For the inhabitants of the richest countries on Earth, the fear of change has been funneled into a fear of refugees.

At the moment, countries across the Western Hemisphere are experiencing something similar: populist, anti-liberal parties and their agents selling voters on a message that tries to present the situation "as it really is." Of course, it's not true. They are simplifying highly complex issues using ridiculously narrow formulas. The political left in Spain, Greece, Portugal and the U.S. employ this tactic as well. The two extremes of the spectrum share a propensity to attack democratic institutions. In Germany, like in the U.S., these attacks are often aimed at the political elite and the media.

The AfD in Germany is asking for the same index for the theater and arts establishment of the country: one that presents only works that promote German-ness. The bourgeois public seems to accept this notion.

In January, an Iranian harpsichordist, for example, was booed during an event in Cologne. He was ridiculed at first because he did not address the crowd in German, and then chaos broke loose because some people in the audience thought the music was too modern, and therefore not music at all. The concert had to be cancelled.

And then this month, in Bavaria, a Catholic priest with black skin had to step down from his post due to vile racism and discrimination and death threats. His crime? He asked the sheep of his flock to view the refugees in a Christian light and not as a threat. 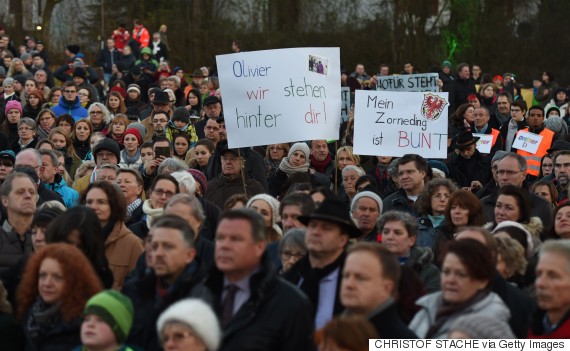 People march in support of Olivier Ndjimbi-Tshiende, the priest who was targeted with racist slurs and deaths threats, in southern Germany on March 9. (CHRISTOF STACHE/AFP/Getty Images)

This is Germany 2016. It is reminiscent of the era our great-grandparents were happy to have left behind: denigrating democratic institutions, dismissing the media as a "lying press," making a boogeyman out of a minority group. If the AfD is celebrating its entry into the national Parliament this weekend, it'll be enemies of democracy who will sit in those seats.

As of today, Angela Merkel is still the strong woman in German politics. The majority still trusts her to overcome this crisis, to save the country and all of Europe. But a right-wing party that's strong and growing stronger will negatively alter the political culture of the country for a long time to come. Unlike in the past, the right has the support of the middle class, well into the Christian spectrum. Some in the middle class believe that the values of the West and of Christianity must be defended against an Arab invasion. Do they want to sacrifice liberal democracy, the best and most Western of all Western achievements?

The U.S. would do well to understand everything that is at stake in its presidential election. The U.S. president is the leader of the free world. If we are not careful, the free world will fizzle out before our eyes faster than we ever thought possible.

Germany's Right-Wing Revival: A Worrying Trend of Intolerance Is Spreading in the West
PEGIDA rallies