Little has been transformed more in recent years than the world of energy. It's hard to think of a sector that has undergone more changes in the years between the 2000 launch of the Millennium Development Goals and the new 2015 Sustainable Development Goals that will be formally endorsed at a global Summit at UN Headquarters this September.

There is now 15 times more solar power and three times more wind power in the world than in 2007. On a global level, more clean-power capacity is being installed than coal, oil and gas put together. Solar power is growing faster than even we at Greenpeace predicted, and renewables are now the cheapest way to provide additional electricity in an ever-growing number of countries. In other words: renewable energy is winning the race against fossil fuels.

In this context, it is almost disappointing that the UN's Sustainable Development Goal 7 calls on us only to "by 2030, increase substantially the share of renewable energy in the global energy mix." This "substantial increase" is already on its way and inevitable. The question for planet and humanity alike is whether this transformation will deliver energy access to all -- and whether the switch to 100 percent renewable energy will be fast enough to prevent dangerous climate change.

Renewable energy can certainly meet the world's energy needs. The Intergovernmental Panel on Climate Change recently confirmed that the technical potential is much higher than global energy demand. Many countries, such as Denmark, but also communities, regions, and megacities are already committed to making 100 percent renewables a reality.

Sydney, the most populated city in Australia, will switch to 100 percent renewable energy in electricity, heating, and cooling by 2030. Reykjavik has achieved a similar goal already. Even leading businesses like Ikea, Mars, Philips, or Swiss Re are campaigning to ensure that by 2020,100 of the world's largest companies will run on 100 percent renewable power.

Dharnai, a solar-powered village in India, has shown how we can make this renewables boom deliver for all -- including the rural poor. This village is located in Bihar, one of the poorest provinces in India. The community faces extreme poverty, deep caste divisions, and very high illiteracy rates. But life there has been transformed in the 10 months since an affordable solar-energy grid arrived. It is the first village in India where all aspects of life are powered by solar. The 100 kilowatt (kW) system powers the 450 homes of the 2,400 residents, 50 commercial operations, two schools, a training center, and a health-care facility. A battery backup ensures power is available around the clock. 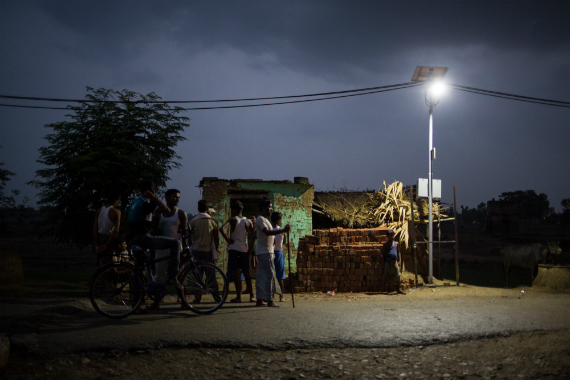 Solar-powered lighting means children can now go out and play after school and finish their homework after sunset. Women feel safer venturing out after dark. The arrival of solar water pumps has brought new hope to many farmers for improving access to fresh-water resources. With solar energy, more villagers have further been able to recharge their mobile phones regularly, so the solar grid has also opened up this community to the world of the Internet. 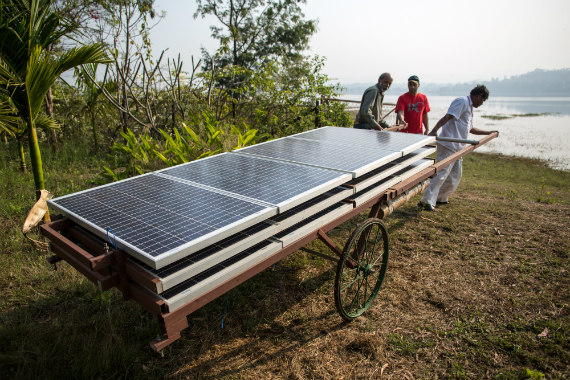 This is just the beginning. Improvements in the quality of life of its residents have become the talk of neighboring villages that are eager to understand and replicate the Dharnai model. India has 80,000 villages that still need solar micro-grids.

And this story goes well beyond India. Hundreds of millions of people worldwide live without electricity. For them, this village solar-powered micro-grid could be a game-changer, a model for bringing clean, reliable energy to all.

The switch to renewables can deliver for people in industrialized countries, as well. For example, while Greece's debt crisis has received worldwide attention, few are aware that energy poverty is one of the most dramatic symptoms of the Greek recession: six out of every 10 households are struggling to pay their energy bills.

Worse, through their electricity bills, Greek consumers pay around €800 million a year to subsidize the oil imports providing power to the country's many islands. This is equivalent to the cuts in pensions that were recently forced through by Greece's creditors. These oil imports are also unnecessary. Solar could power Greek islands very well. Indeed, Greece's short-lived "Photovoltaic Spring" of 2009-2013 provided a glimpse of the country's solar potential. Within five years, installed solar capacity jumped from 47 to more than 2,500 megawatts. A total of €4.5 billion was invested in modernizing the energy sector and created around 50,000 jobs. In all, around 100,000 Greek families benefitted. The "Solarize Greece" campaign by Greenpeace Greece aims to build on this success, which was undermined by austerity. We the people of the world must unite and once again kickstart solar power as a driver of the Greek economy.

From Dharnai to Greece, there is no question that, all over the world, people and the planet will benefit if Sustainable Development Goal 7 is implemented in a truly ambitious manner. The world of energy is transforming fast and a real energy revolution is within our grasp. Governments must follow up the many fine words that will be spoken at the UN Sustainable Development Summit with actions that put our world on the path to 100 percent renewables by 2050.

This post is part of a series produced by The Huffington Post, "What's Working: Sustainable Development Goals," in conjunction with the United Nations' Sustainable Development Goals (SDGs). The proposed set of milestones will be the subject of discussion at the UN General Assembly meeting on Sept. 25-27, 2015 in New York. The goals, which will replace the UN's Millennium Development Goals (2000-2015), cover 17 key areas of development -- including poverty, hunger, health, education, and gender equality, among many others. As part of The Huffington Post's commitment to solutions-oriented journalism, this What's Working SDG blog series will focus on one goal every weekday in September. This post addresses Goal 7.