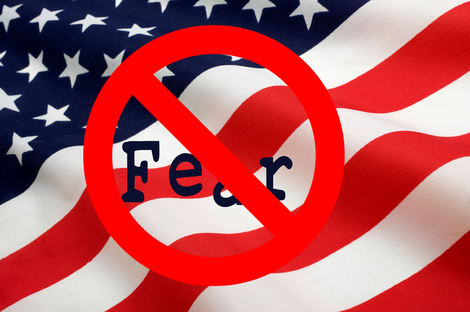 Get a grip, Americans! Is that too much to ask? Take a deep breath, exhale and realize that the end of the world is not at hand. Neither is the end of American life as we have known it -- unless we allow unwarranted fear to overpower our sense, as most of the candidates running for the presidential nomination of one of the major parties want us to do. So, of course, do the jihadists.

We are hearing talking heads on mainstream media shows say that the incident in San Bernardino proves that the American strategy for preventing domestic terrorism isn't working. This is often said in the next breath after the same wise opinion-shapers have pointed out that the shooting last week was the worst terrorist attack in the United States since 9/11.

Try to calm down for a moment, especially if you have been listening to the rantings of Donald I-Am-Megalomaniac-I-am-Strong! Trump , Ted Carpet-Bomb-the-Muslims-into-Stone-Age Cruz, or any of the other fear-mongers in the Republican presidential contest.

Of course the killing of fourteen Americans and wounding of many more last week was a terrible event. But it has been more than fourteen years since 9/11. If this is (and it is) the worst terrorist attack in America in all of that time -- seven years under the Republican administration of George W. Bush and seven years under the Democratic administration of Barack Obama -- doesn't that strongly indicate that the strategy has been working very well, indeed?

Mass killings have become an everyday event in America. What makes this one so much more frightening? Several of the other attacks that have taken place in recent months were also terrorism, but the terrorists were crazed white racists (Charleston), crazed anti-abortion zealots (Colorado Springs), or acted from various other twisted motivations. Why should we react differently when the terrorists are Muslim?

So, difficult as it is at a time like this, we need to take a step back from our fears and stand up for our American way of life, our values and our liberties. Officials certainly need to go through all the security measures that have so successfully been protecting our people at home for the last fourteen years and see what can be improved.

But we do not need to go crazy with fear or change our lives or get caught up in anti-Muslim hysteria. That is just what ISIS--and Republicans--want us to do. Don't give in to them!