Toon fans and film historians just don't know what to make of Walt Disney Animation Studios' Get a Horse! 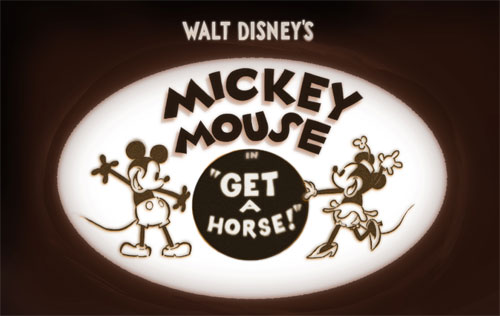 There's a real air of mystery surrounding this animated short. The fact that it's done in black-and-white, features rubber-hose, pie-eyed versions of classic Disney characters and has Walt himself providing Mickey's speaking voice suggests that this is something that Disney must have dug out of its vault. And yet still others at the studio are suggesting that Get A Horse! might actually be an entirely different sort of animal. A heartfelt tribute to those early Mickey Mouse shorts that was secretly put together by some of top animators working at WDAS today.

So what actually is the truth here? For now, the Mouse is keeping its trap shut. Suggesting that those who have to know make their way to France in June. Which is where Get A Horse! will be making its world debut at the Annecy International Animation Film Festival.