A new ad campaign is attempting to shock women into thinking about their fertility.

The "Get Britain Fertile" campaign, funded by pregnancy testing company First Response, depicts 46-year-old TV presenter Kate Garraway dressed up to look like a "heavily pregnant 70-year-old," reported The Telegraph. The image is quite striking and is presumably intended to shock -- in order to start a conversation about delaying having children. According to the Organization for Economic Cooperation and Development (OECD), the average British woman has her first child at age 30, five years later than the average woman in the United States.

Garraway told The Telegraph that she participated in the First Response campaign because she "want[s] to alert women to start thinking about their fertility at a younger age than my generation did." 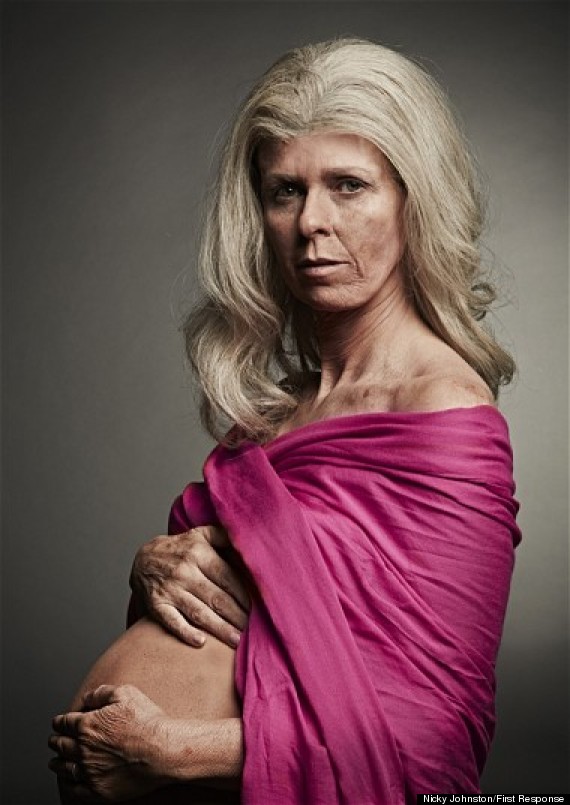 As Slate's Jessica Grose noted, a 2011 survey found that 70 percent of women said that they wanted to have children, with the majority of those women reporting that they'd like to have their first child in their early 30s. However, the survey also found that 75 percent of women who wanted to get pregnant eventually were not concerned about their ability to conceive. Yet a December 2012 study found that over half of women who needed IVF to become pregnant after age 40 were "shocked" that they needed to undergo fertility treatments. Obviously some women are not being properly informed about the realities of their own fertility.

However, some have criticized the campaign, arguing that it's not actually an effective way to educate women about these issues:

According to Think Progress' Aviva Shen, the campaign is effectively shaming women for making the choice to delay child-rearing. "First Response has decided the solution to the trend of women waiting longer to have children is to criticize them, prey on their fears of aging, and exploit social disgust for even moderately sexual old women," she wrote.

She also pointed out that "Get Britain Fertile" ignores the very real reasons that many women feel compelled to have children in their 30s, like student debt, the inability to find steady work with health benefits and the sheer cost of raising a baby.

Hopefully we can find a way to give women the facts about their own biological clocks without making them feel guilty or terrified for waiting to have kids -- or not having kids at all.

What do you think of the "Get Britain Fertile" ad? Is it effective or offensive?