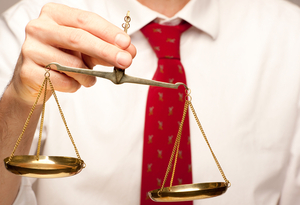 I was in debt.

The "how-will-I-ever-pay-this-back?" kind of debt. The kind that haunts you in those moments right before you fall asleep.

And what's worse: I'd been carrying this unpaid balance for over two decades.

How much did I owe? More than I could write a check for because it wasn't a financial debt.

Back when I was in my early 20s, I got into real estate. I started working in my father's office. You probably remember that I was actually really good at real estate -- out earning the entire office where I worked in my first year. But what you may not know is it was a rocky start. The other people in the office didn't like me very much, and I can't blame them. I was aggressive, arrogant, and alienated myself from all of them within the first week.

Well, all but one.

There was one guy who had been working in that office from the beginning. And while the rest of the office withheld the tips of the trade, or simply snickered when I made rookie mistakes, this guy would pull me aside and in a single sentence, set me straight.

No amount of dollars, no extravagant gifts could express the extent of my gratitude.

And I had no idea how to pay him back.

Then, after not seeing him for many years, I saw him at my father's service and had the pleasure of spending a few moments catching up. A proud grandfather now, he told me that his granddaughter had recently graduated from college, at the top of her class of course. She was at the beginning of her job search in the Bay Area and had an eye on a position at a well-known tech company. It was a stretch, especially for a recent grad, but...

Suddenly a thought occurred to me.

Without saying a word about it, I called a few people who knew a few people and got her an interview at the highest level of that well-known tech company (which will remain anonymous -- a good journalist and people broker never reveals his sources).

With my strong endorsement, the support of the friend I called, and an exceptional interview on her part, she was offered the position.

She is now working at her dream job, with her dream employer, making twice what she expected and with the added bonus of living close to her grandfather; her mentor and mine.

Though I had hoped to remain anonymous, a few weeks later I received a phone call from the man who had helped me so many years earlier. Through the phone I could hear his voice crack as he expressed his gratitude.

"I can't believe what you did. How can I ever repay you?" he asked.

I always repay my debts.

I challenge you to write down the five people who have made the biggest impact on your life the last year or two. Then plot and scheme on how you can do something for them to get, at least, a little bit more even. I'm sure it will be fun and as rewarding for you as it will be to your recipient.