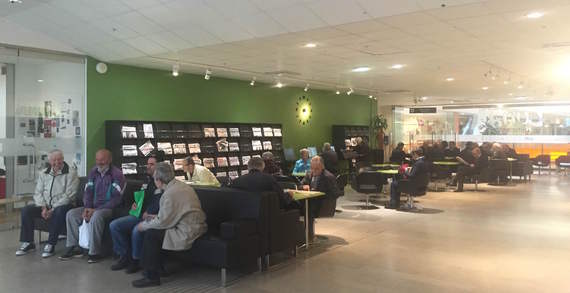 I'm at the library in Södertälje, a small city outside Sweden's capitol Stockholm, for the first time in many years. My Internet crashed and I needed Wifi. A friend told me about the City Library. I thought it would be empty. Who goes into libraries nowadays? Imagine my surprise when I came into an almost crowded room and nearly all the seats were occupied.

A young woman sitting next to me has a lot of books opened. I glance. She is studying to become a doctor or nurse. I wonder how she can focus with all the noise around her.

A man is walking around the library. He is stressed and talking loudly in Arabic. I understand some and get astonished. He speaks with a refugee smuggler, negotiating to get his daughter out of Africa. Which country is unclear. She is stuck there, she fled with her family to Turkey. He, the father, has managed to get to Sweden. Smugglers shattered the family. The mother and two children never managed to get out of Turkey, they got stuck there. Then the daughter was sent on a flight to Egypt. Now she is in any other country of Africa. The father is panicking. He first calls the smuggler who took her to Egypt, screaming, yelling and threatening. Then he calls new smugglers, as he is desperate to bring his daughter here.

The man calls a relative in the United States, asking if he could lend him more money. Another man stops next to him and asks how his sister in Aleppo is doing, if they have any contact. The Christian part of Aleppo has been under attack by Islamists two week ago where more than forty people were reportedly killed.

By the public computers sits a man and a woman that look Middle Eastern. The man speaks Assyrian/Syriac and the woman speaks Arabic. They talk with their relatives in Syria via Skype. Loud. Both conversations go on about how best to get people out from Syria. Which smugglers are trustworthy and which are not. The woman says to her relatives to be careful, that many smugglers are scammers and it is easy to be conned.

I look outside. The sun is shining. It's not really summer just yet based on how people are dressed, but it's sunny at least. Directly under the window, on the pedestrian street in Södertälje, there is a café for people who like to smoke hookah. It's not even two in the afternoon and there's at least five tables sitting and smoking a pipe.

Now, the man who went around and called smugglers left the library in a panic. The two that skyped have been replaced. Now there were two new ones skyping. A young girl, who looks to be ethnic Swedish, talking with her boyfriend, very quietly. I'm guessing that it's the boyfriend based on the way she's talking on the phone.

Next to her sits a student, a distant relative of mine. She's here to print her latest thesis.

The woman next to me who is studying medicine begins to pack up. When she stands up, I see why she has been able to concentrate. She had orange earplugs in her ears.

Aydin Özkaya, Labour Coordinator, sees me and wonders if I can give a lecture on how to best enter the Swedish labor market, therefore as a new arrival to get a job. At the table where the medicine woman was sitting, there are now two men which are about to open an asylum residence (shelter). They're sitting and calculating how much money they can earn. A third man joins them asking if they're sure that there is no apartment he could rent for his brother's family who are coming to Sweden, Södertälje. The lack of housing in this municipality is huge. The men answer that they don't have anything now, but they'll be in touch if something becomes available.

It is apparently the library to go to if you want excitement and new experiences, both through books and in reality.