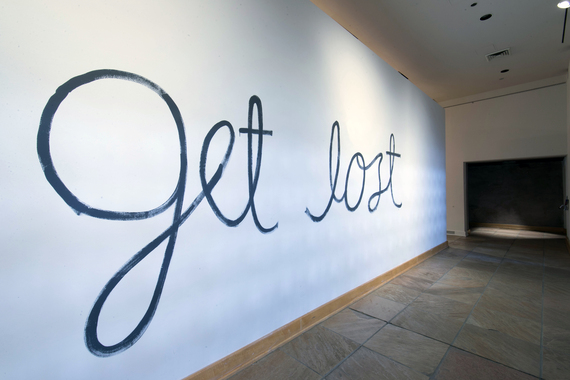 Modernity, Jean-Michel Rabaté tells us, may be nothing but its own ghost. Mexico City and New York-based Miguel Angel Rios' work spans two centuries and responds and interrogates, as inflection and affliction, to the ghosts of the "pre- post-trans-anti-hyper-neo." As such, Rios has garnered the stature of one Latin America's leading conceptual artists and the exhibition "Landlocked" exposes an artist that deals with issues beyond territorial and global concerns at the intersection of video, land art, conceptual art, sound art and performance.

Rios' spatial-political videos bridge the gap between post-modernity's formative context and codified social practices by introducing a kind of "spectral modernity". Through his recurring use of cubes, spirals and games--themes and representations we see throughout the twentieth century in art and literature-- Rios is attacking the modern and after-modern art debate surrounding the start and end points of modernity: when does modernity begin and end? The artist asks in his notes about the work "Are we inside or outside the cube?" For Rios, the task of critical art is one of reflecting and restaging these modalities in his expanded artistic practice. Rios' work traverses geographically specific locations (the Americas) and socially specific issues such as post-colonial Western tensions, privatization, de-regulation and global economic liberalization and delivering representations that are equally violent and poetic, disruptive an generative and distinctly of this time landing in a modernity-is-now resolution.

In the "Ghost of Modernism lixiviados, 2012" a transparent the cube floats like in a Magritte or Ernst surrealist painting--as an aesthetic object in and of itself -over a landscape which moves from urban to bucolic to exurban to deserted, from slums to landfill throughout the borders of the peripheral landscape of Argentina, Bolivia, Peru, Chile, Colombia, Brazil, Mexico and the United States. "Lixiviados" : in English leachate, a widely used term in the environmental sciences where it has the specific meaning of a liquid that has dissolved or entrained environmentally harmful substances that may then enter the environment. It is most commonly used in the context of land-filling or industrial waste. 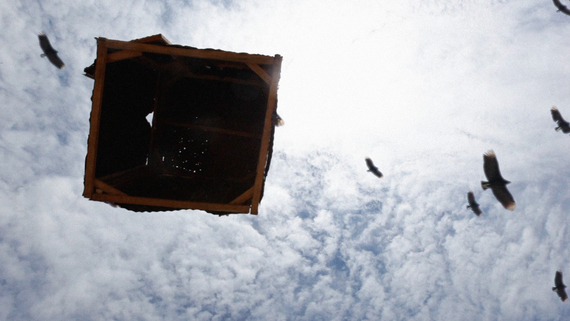 Waste or what-is-left-after-as-remains is like a "ghost" and this ghost projects shadows just like the history of modernism and its aftermath. As the cube moves through the landscape, it both defines space as an intermedial decal but also casts shadows among the landscapes creating landscapes "cubed." Rios' Ghost of Modernity shifts from plane to space and could be read as that [that: ghost?] of spatial critique, so prevalent in twentieth-century minimalism and entropic earth art. The floating cube acts as a kind of nodal point that connects in two directions: backwards to the modern history of art, and forwards to contemporary spatial practices. The cube and its "shadow" which is made more evident in the collection of drawings made for the video establishes a crucial dichotomy between that which is to be kept outside (the social and the political) and that which is inside (the staying value of art). This value or residue can also be transferred onto other spaces and non-spaces (to reference the work of Marc Augé and Michel Foucault among others.) In a way this poetic video accompanied by a sound track of John Cage's-- indeed, it is no accident that Cage, the pioneer of indeterminacy of music has been selected for elegiac confrontation on modernity-- becomes a comparative analysis of space: an analysis of territories, states, institutions, and their contingent mechanisms of inclusion and exclusion, representation and de-presentation. The "ghost" is not just what is shown or delineated by the shadows but also what must be given up or erased in order for one spatial formation to take precedence over another or in terms of culture and representation-one urgent narrative replacing the old.

In Miguel Angel Rios' two videos On the Edge and 'Til Death it is no longer the cube that haunts but rather the spiraled spinning image which, like the phantom cube, illuminates and makes real the same tensions and spatial conflicts that we see in the "Ghost of Modernity." "Spirals," as Nico Israel argues in his recent book On Spirals: Whirled Image in Twentieth Century Literature and Visual Art, Columbia University Press, 2015 " are a crucial means through which twentieth century writers and visual artists think about the twentieth century. Approached as images in the sense Walter Benjamin gives the term, spirals in art illuminate how conceptions of modernity, history and geopolitics are mutually involved." Israel understands spirals in literature and art as "methods" rather than themes and looks at the "dual-directionality" sweeping the twentieth- and twenty-first-century aesthetic production-- from Tatlin's Constructivism to Yeats's gyres, from Duchamp's Rotoreliefs to Smithson's Spiral Jetty, from Ubu's helicoidal paunch to Kentridge's whirling cartoons. Where Rios and Israel's spirals adhere or spin together is in the shared representation that spirals do not simply" express a relationship to the past, but create an opening for potential newness." 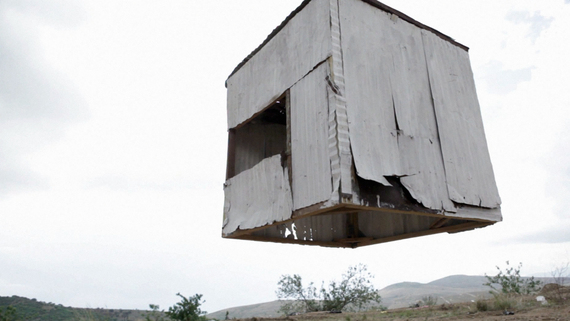 The artist writes about On the Edge: "This new project involves a large number of spinning tops distinguished by color. The random interaction between the spinning tops is choreographed to insinuate the struggle for power in society. White spinning tops are dominant and take the central stage preventing the access of "others" that are subordinate to them by patrolling their territory by spinning back and forth. Meanwhile, the subordinate black spinning tops come from a lower level and attempt to access the higher ground controlled by the white ones. On the Edge stages a dangerous game as a metaphor of the battle for social supremacy. This "struggle for power" or battle for survival is also evident in 'Til-Death which is edited in reverse, in a reversed coiling in which the popular Latin-American street game called "Trompos" filmed in Tepoztlan, Mexico, is viewed from multiple perspectives, and confined within a white grid painted on asphalt (the grid is yet another minimalist late twentieth century recurring form.) The Trompo or Whipping Top is a top which is spun by winding a length of string around the body, and launching it so that lands spinning on its point. If the string is attached to a stick the rotation can be maintained by whipping the side of the body. Trompo tournaments are spontaneous, highly competitive street sports that take place throughout Latin America in haphazard, interstitial social circumstances.

Rios's interpretations of trompo-- from the beautiful courtship dance in
LOVE to a dreaded death game in A Morir--from eros to thanatos-- offer [are] a syncretism of European modernism and indigenous folk art and remnants of Amerindian culture. In LOVE, 2006, where I first encountered Rios' work at Perez Art Museum, Miami, two black-and-white tops, spin forward, then backward, clack together, or nearly miss in a whirling, sometimes violent, dance reminiscent of a tango. The tops move to Maria Callas' version of the famous aria from the 1892 opera La Wally by Alfredo Catalani in which Callas plays Wally, the character who sings about a suffering heart. The tops seem to perform a dance of love, passion and ultimate tragedy as one falls before the other: a final top eventually topples marking the end of love and life-force. When I first saw this work I recoiled and like a top, I was sent spinning. To recoil has so many definitions--to turn away in fear, to react, backfire, to escape, surrender, spring back to abandon...It's antonym [is] to spiral or to coil. Viewing the videos and drawings in "Landlocked" was not unlike my experience reading the Cuban novelist Alejo Carpentier's or the late Gabriel Garcia Marquez'. Both are authors of what is called "Lo real maravilloso", or the ""marvelous real or "magic realism" in which the interweaving of surreal stories and unflinching journalistic accounts, of actual horrors of colonial plunder and exploitation and the resulting nefarious reigns rule of dictators, incompetent patriarchs, venal oligarchs, and corporate gangsters in much of the Southern Hemisphere is mixed with dreams, violence, love, ghosts and poetry. "Landlocked" is in fact not landlocked at all ---instead the exhibition breaks out of the current post-colonial hangover in contemporary art because, Rios, with his specters and spirals, keeps us coiled and recoiled, in the trances and dizziness of our contemporary condition, and he is surely not playing games . 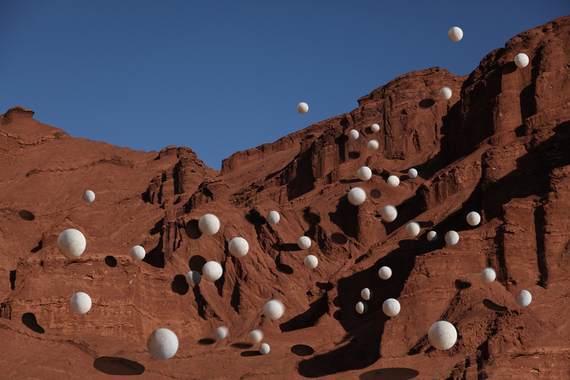 Image credits:
All images are courtesy of artist and Sicardi Gallery.
Photography of exhibition by Peter Bugg