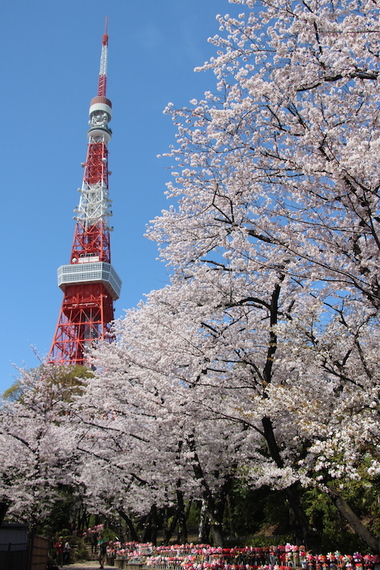 If you're lucky enough to visit Tokyo during cherry blossom season, you don't want to waste a moment of precious time. Why? Because you never know when a spring storm will sweep in and blow those perfect pink blossoms away. It happens nearly every year.

Plan your photo itinerary like a local with this guide to Tokyo's best cherry blossom spots. 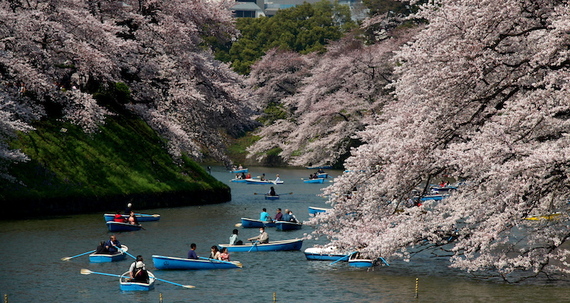 Rent a rowboat and glide beneath the blossoms. Photo by Gail Nakada.

Cascading blossoms along the Imperial moat
Chidorigafuchi is an only-in-Japan cherry blossom experience. Blossoms cascade in waves from a thousand trees along the grassy sides of the slopes above the moat. Breathtaking may be a cliché, but it doesn't even do justice to the beauty of this place. 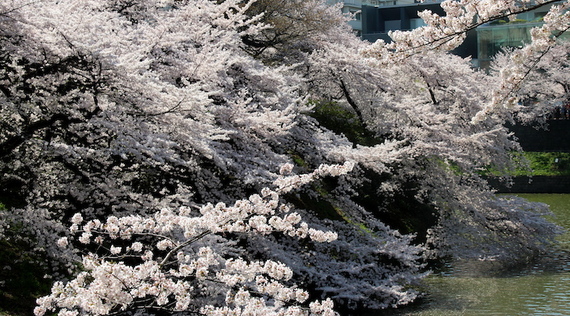 A thousand trees line the banks of the Imperial moat. Photo by Gail Nakada.

The slopes are opposite a promenade that is also lined with cherry trees. The walk parallels the winding moat for blocks. Follow the crowds, then turn around and follow them back so you don't miss any of it. At night, the trees on this side of the moat are illuminated until around 9 p.m. Those on the slopes are not, so keep that in mind. 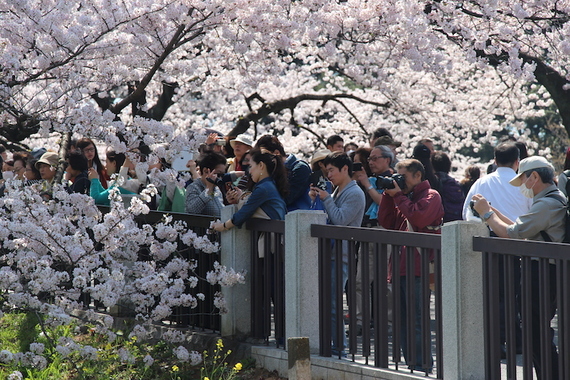 Rowboats are available for rental at 850 yen an hour. There will be a line. 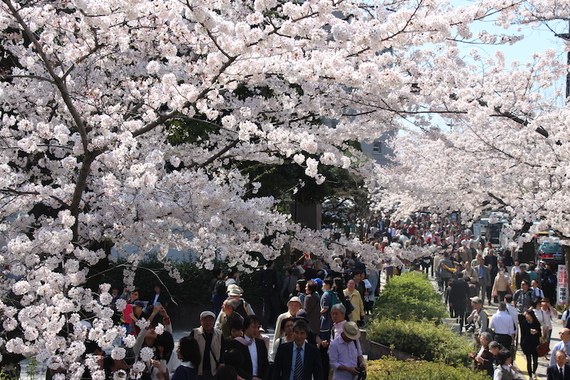 Access: The easiest station to start from is Kudanshita Metro Station, Tozai, Hanzomon and Toei Metro lines. Kudanshita is very near Yasukuni Shrine (also famous for blossoms but many of the trees are obscured by rows of food and drink stalls). The moat is across the big, busy intersection, you will see the walls from the exit. If you start here, follow the moat-side promenade to your right. Just keep walking, it goes on for a long way. You will see the stairs down to the boat rental area about halfway along. 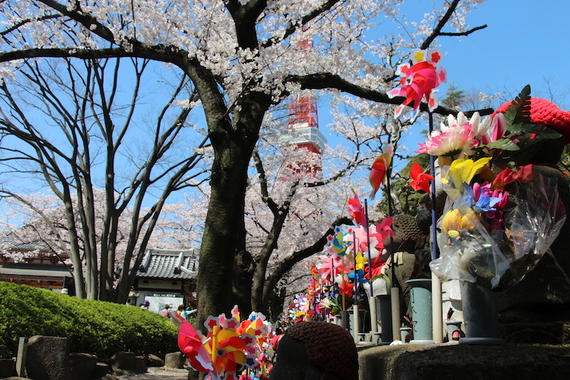 Zojoji Temple is the place to get your blossoms-plus-Tokyo Tower shot. Photo by Gail Nakada.

Cherry blossoms and Tokyo Tower
Japanese descend on Zojoji Temple at this time of year for that perfect shot of cherry trees and Tokyo Tower. This is also a great spot for blossoms with traditional temple architecture.

For that photo of Tokyo Tower, walk directly toward the main temple but before you reach it, go to the smaller temple on the right. There is a gate to rows and rows of little Jizo guardian statues. Go through the gate and walk down the narrow path. Turn around for the blossoms-plus-tower shot. 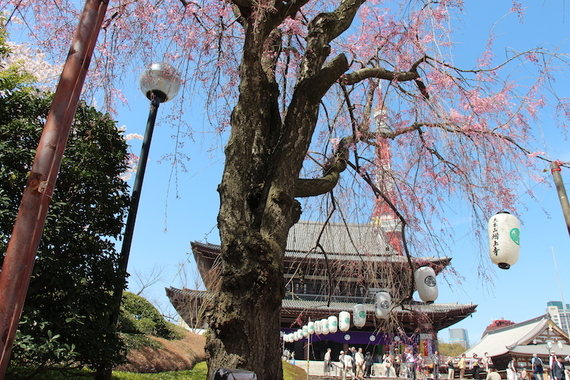 The main hall at Zojoji Temple. Photo by Gail Nakada.

For photos of the trees with temples, you will need to move around the grounds. There are no trees directly flanking the huge main hall.

Zojoji was a favorite of the powerful Tokugawa shogunate that ruled Japan for over three centuries. Super Shogun Tokugawa Ieyasu believed Zojoji's Black Amida Buddha statue helped power him to victory in unifying feudal Japan. See it in the temple to the right of the main hall.

Get creative at Zojoji for shots of blossoms and temple architecture. Photo by Gail Nakada.

Access: Onarimon Station, Mita Metro Line, A4 exit, five minutes. Hang a U-turn and cross the street directly in front of you (the corner with the park entrance). Walk straight ahead along this street. You will pass the Tokyu Hotel set back on the right and a restaurant. Keep going across the next street. From there, you can't miss the entrance to Zojoji. 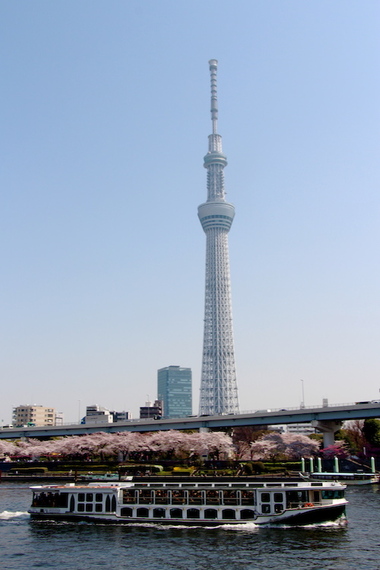 Tokyo SkyTree from the Sumida Riverwalk. Photo by Gail Nakada.

Cherry blossoms and Sky Tree
Japanese love SkyTree tower and for them, SkyTree plus cherry blossoms is a must-have shot. It's also easy to get from the Sumida Riverwalk. This riverside promenade of a thousand trees - yes, a thousand! - is across the street from Asakusa Station. Combine it with a visit to Asakusa Sensoji Temple. (FYI, there are no big stands of cherry trees in Sensoji Temple.) 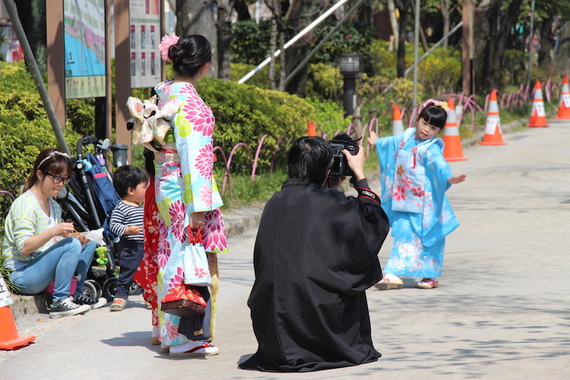 During cherry blossom season, the Riverwalk is a favorite for special famiy photos. Photo by Gail Nakada.

You will have no trouble grabbing that perfect shot of towering SkyTree in the distance framed by blossoms. In the evening, lanterns are lit all along the route until about 9:30. Romantic. Beautiful. Go. 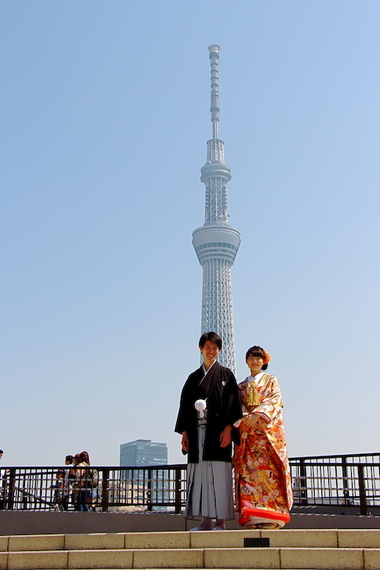 A photo here has become a must for wedding albums. Photo by Gail Nakada.

Access: Asakusa Metro Station, Ginza Line. Take Exit 1 (there is an elevator and stairs). Bear to the left a little to get to the busy intersection. Cross at the busy corner with the bridge in front of you. That is the Sumida River. Enter the walk and go to the left for views of SkyTree. 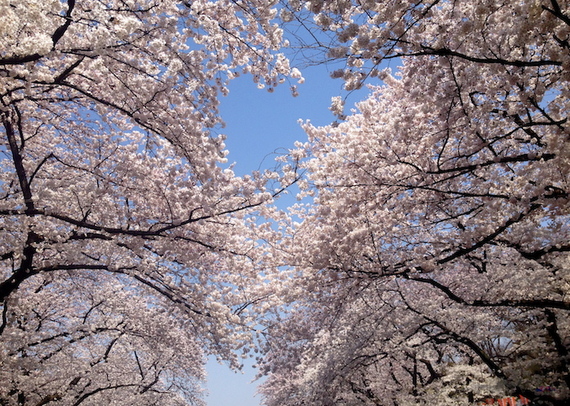 Cherry blossoms at Ueno Park
Although many foreigners say they prefer Shinjuku Gyoen Park for cherries, Ueno is the place to get that iconic shot of crowds and cherry blossoms.

Also, Shinjuku Gyoen closes at 4 p.m. Ueno is beautifully illuminated with traditional lanterns once the sun goes down and stays open until late. 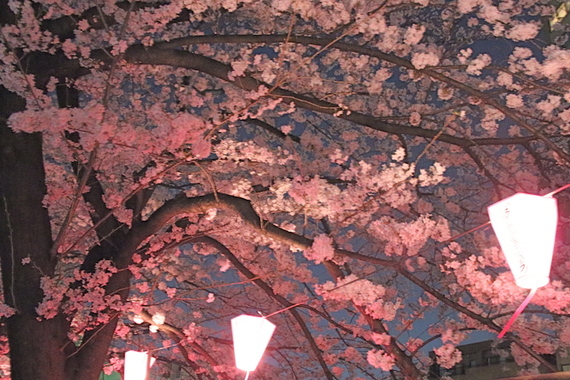 Be sure to include night viewing in your itinerary. Photo by Gail Nakada.

Don't miss the chance to walk (and take photos) beneath clouds of blossoms softly illuminated by paper lanterns.

Access: Ueno Station is served by a number of JR lines as well as the Ginza subway. The most convenient access is from the JR lines right at the top of the hill directly across from the park.(If you take the Ginza metro line, you will need to walk up the hill on the left side of the street, there is an elevator next to the stairs outside.)
From Ueno JR, take the Koen or Park Exit. Cross the street and bear to the right for a few yards then left along the main walkway that goes between the museums-- on your right - and concert hall - on the left. Everyone is heading that way too.

Cherry Blossom Alert: If you are planning a trip to follow the cherry blossom wave in the future, here's an important tip. Don't wait for the first week of April. Cherries generally start blooming in Tokyo the last week of March and the peak has often passed by April third or fourth. Your best chance is to arrive the last few days of March and stay until the first few days of April.