Haven't heard of Kaleo? Listen to "All the Pretty Girls" and you'll have 'em on repeat.

Think Of Monsters and Men, with an extra dose of soul. Kaleo's unique blend of folk, blues, country and rock shows off their (rare) ability to play different genres with equal skill.

The Icelandic indie rock band, whose name literally means "the sound" in Hawaiian, recently performed at SXSW and is currently on tour with Vance Joy (perhaps best-known for his catchy, quirky hit "Riptide").

Bandleader JJ Juliusson, drummer David Antonsson Crivello and bassist Danny Jones have been best friends since attending elementary school together in Mosfellsbaer. In 2012, they rounded out their rock quartet by adding guitarist Rubin Pollock to the mix.

I sat down with Kaleo at Houston's House of Blues to get the scoop on their upcoming album, life on tour and the inspiration behind those soulful tunes. 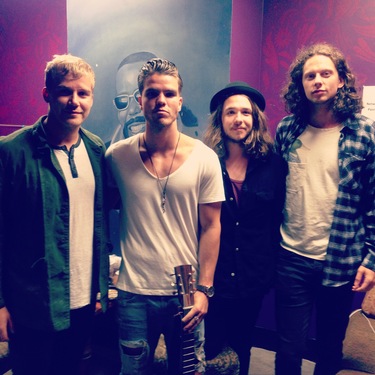 (From left: Danny, JJ, David and Rubin at Houston's House of Blues)

So tell me a little bit about touring.

Danny: This is our first U.S. tour. We did one small tour in Europe but it didn't really count. [Laughing]. Not compared to this!

Touring with Vance is huge! How did that come about?

David: We are on the same record label, Atlantic Records. They set it up for us.

Touring with Vance has been great -- the crowd is really good, really interactive. We didn't expect to play for so many people, and then we got on this Vance tour and it's the best thing that could have happened.

You've known each other since elementary school (with the exception of Rubin). Rubin, how did you meet the band?

Rubin: I knew David through some mutual friends, and he called me one day and asked me to come to a rehearsal. We've been performing together now for three years.

The song "Vor í vaglaskógi" was an overnight success for you, causing quite a stir in Iceland. What is it about? And my apologies if I totally butchered the pronunciation!

What's something that's been difficult for you while touring? Or is it all sunshine and rainbows?

Rubin: Ha-ha, mostly sunshine and rainbows, yeah! But probably keeping the tour bus clean [laughs]. We definitely struggle with that. And the long drives! But we always find a way to kill the time. We have a mandolin and a really small traveler's guitar on the bus, sometimes we mess around with that.

What's something each of you has struggled with as a musician?

David: A lot of self doubt. I think all musicians struggle with that. But you kind of get over it, especially when you start performing and you see that people like your music.

Does musical talent run in your families?

Danny: My father was a punk star back in the day. An 80's punk rocker.

David: My sister played piano, my brother played guitar, my mom sings. I picked the drums.

I bet your parents were thrilled!

David: Ha-ha, no they actually loved it! The noise never bothered them.

What was your favorite band when you were a teenager?

How do you go about writing your songs? Do you collaborate on the lyrics?

Rubin: JJ does most of the writing.

JJ: Most of the time, for me, the melody comes first. Then the lyrics.

What song is most personal to you, JJ?

JJ: I think a lot of the stuff we have coming out soon is more personal to me than before.

When does that come out?

David: Hopefully soon! [Laughs]. We're actually not sure. We are recording while touring.

What is something really unique a fan has done for you?

David: One fan painted a picture of all of us wearing women's clothes -- everyone except for JJ, ha-ha. We had lipstick and everything!

Behold Kaleo, for this is my masterpiece!

How do you feel about tattoos?

David: Love 'em! I just got one right here, it's still healing. [He shows me a tattoo of a ship on his left arm, accompanying older anchor and compass tattoos.]

Awesome! Any symbolism there?

David: That I'm the captain of the ship! [Laughs]. Captain of my own life.

Danny: Kaldi -- representing Iceland! And Brennivín. It's a schnapps made out of potatoes and cumin.

How is that chocolate you guys are munching on, by the way?

Rubin: It's not very good, actually. [He continues to eat it. I am amused.]

So what's next for Kaleo?

Rubin: We're heading back to Austin tonight, which is our home town right now. So far, we love it!

This is one band you don't want to miss. Be sure to check them out on tour!