Mark your calendars! On May 9, 2016 there will be a Transit of Mercury - that's when the tiny planet Mercury will come directly between us and the Sun. From Earth, it will look like a miniscule black dot crossing in front of the huge solar disc - like a super-tiny eclipse. To paraphrase a famous song, "There'll be a little black spot on the Sun this May!"

This rare and subtle event is visible only 13 or 14 times each century, and I want you to see it all.

A Little about Mercury and the Sun
These are two substantially different celestial bodies. Mercury is a small rocky object 3,032 miles wide, while the Sun is an almost perfect sphere of hydrogen and helium gas 865,000 miles in diameter. When the two align and make a Transit, the size difference can be quite eye-opening.

The first person to see a Transit of Mercury was French astronomer Pierre Gassendi in 1631, and the last Transit occurred on November 8, 2006.

The 2016 Transit of Mercury begins on May 9 at precisely 7:12am EDT when the silhouette of Mercury makes itself known at the edge of the Sun - this is called first contact. Then the planet will slowly and steadily appear to move across the Sun until 2:42pm EDT when it finally leaves the Sun's disc (last contact).

So this will be happening most of the day on Monday, May 9 and be visible, for at least a portion of the time anywhere in North America and South America, as well as Europe, Africa and most of Asia. But wait, there's a problem: you can't just stare at the Sun!

Shoot the Messenger
To view the Transit of Mercury you'll need two things:

To accomplish both of these I recommend using a pair of binoculars or a small telescope with a certified safe solar filter. You could also make your own solar filters from special Mylar, black polymer, or Baader film. Or you could use your telescope or binoculars to project an image of the Sun onto white paper - just don't put your eye, head or any body part in the intense beam of light to stay safe. 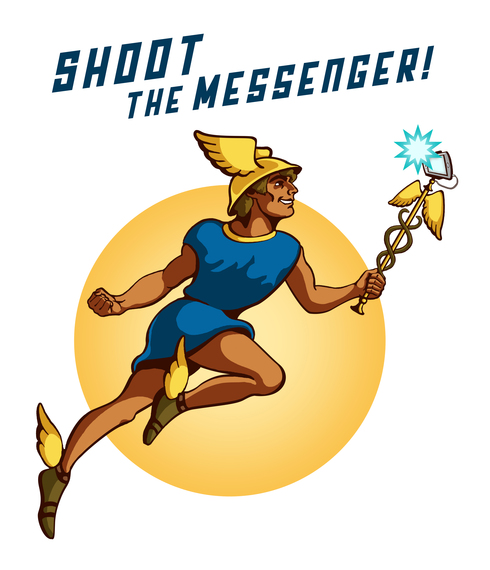 The final challenge is to take a picture of the Transit of Mercury. Either you can position your camera to the end of a properly filtered telescope and document the event, or you can snap a shot of the projection of the Sun on the white paper. This citizen-science project is called "SHOOT THE MESSENGER!" and is sponsored by the Cincinnati Observatory. They will compile all of the submitted pictures into a movie covering the entire 7.5 hour event.

For more information on how you can participate, please visit the Cincinnati Observatory's website.

Here's hoping that you have a bright, sunny May 9th to view this rare celestial event. Prepare your safe solar viewers this month so you don't miss it. The next Transit of Mercury doesn't come around again until November 11, 2019.