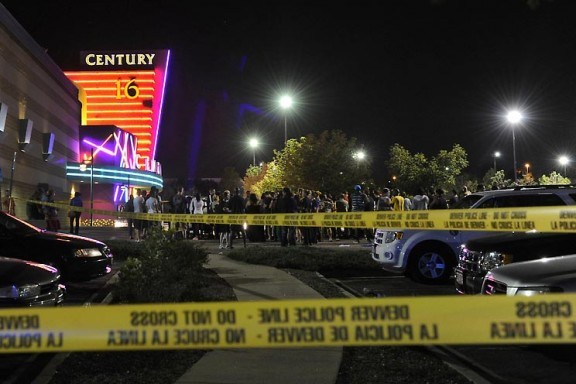 There's been so much said since the horrific shooting deaths in Aurora, CO, Friday. But our nation's leaders, in particular President Obama and the presumptive Republican nominee Mitt Romney, have been woefully silent on the one subject that counts: gun control. Not one word one about the need for new legislation from the two men who wish to be president for the next four years. Quite frankly, it's shameful and infuriating, and demonstrates the unstoppable power of the NRA and the gun lobby in our country today.

We've heard all the requisite yet meaningless nonsense about the need for "prayer" and "strength" and for Americans to "come together" during this time of tragedy. But several dozen people 'came together' in that Aurora movie theater, and unfortunately so did a killer armed like Rambo with various semi-automatic assault weapons. When the hell are we going to actually do something, other than regurgitate empty sermons, to ban these weapons and get them off the streets and out of the hands of these violent monsters who commit such diabolical acts? Both Obama and Romney referred to the killer and his heinous act as "evil," yet both resorted to the same old tired compassion-speak about 'coming together' and prayer.

On the Sunday talk shows it was no different, as surrogates from both parties spewed their political rhetoric. While calling for action on Fox News Sunday, California Sen. Diane Feinstein cautioned about the timing: "I think this is a bad time to brace a new subject." Seriously? Is there a better time to push for gun control legislation than after a horrific shooting like this one? Feinstein, like so many of her colleagues in Congress, lives in mortal fear of the NRA and its influence on millions of voters.

Speaking on the same program, Wisconsin Sen. Ron Johnson (R) spun the standard conservative rhetoric: "I really would hate to see a tragedy like this used to promote a political agenda to reduce Americans' freedom. Enough of our freedoms have already been taken away. We don't want to lose anymore." I'd like to know exactly which 'freedoms' he speaks of that have been "taken away" from him or anyone else. And, mind you, his very statement is just the sort of politicizing of the tragedy that he purports to be condemning. Johnson also suggested that if someone else was armed in that theater then maybe the killer would've been shot before he committed his carnage. This is another typical gun lobby spin. Yeah, that's exactly what we want. Let's have Old West-style gunfights in movie theaters, malls, parks, schools, offices, stadiums, supermarkets, libraries, etc. That'll reduce the body count, right?

This is a simple issue, people. It's a choice between allowing mass killers to easily purchase assault weapons and ammunition... or not. We can stick our collective heads in the sand and "come together" to talk about God, prayer, healing and sing Kumbaya, but none of that -- let me repeat...none of that -- will stop the blood from spilling again. Have we learned nothing in the past thirteen years from the deadly massacres at Columbine, Virginia Tech, Tuscon, etc? Unless, as New York Mayor Michael Bloomberg (the only nationally prominent politician with balls) demanded, our elected officials pass new legislation outlawing assault weapons, our streets will continue to be littered with innocent dead bodies.