Now, I'm just your average hockey mom, but I've taught my children you never click on internet ads. "Rink," I like to say to my eldest, "if it seems too good to be true, it probably is." She'll shoot back something like, "You mean like the Resurrection?" But that's not important. I've done my job as a parent. And even if she gets a cache full of cookies, or ends up in h-ll, I've still got the twins, Bick and Luz.

Still, if you can't trust Newsmax, what can you believe? The late Ronald Kessler works there, and he broke the Reverend Wright story and got every single fact wrong except the words "Chicago" and "church." So I clicked.

And yes, you really can get Sarah Palin's new book, and just pay shipping!

Except it's an old book, it's not by Sarah Palin, you'll pay three times the cost of shipping, and you'll have to subscribe to Newsmax magazine.

"Sarah Palin's new book" turns out to be a biography by Kaylene Johnson. It's Sarah Palin's book not in the commonly understood sense of a work belonging to its author, as in "Arthur Hailey's Airport," but in the Newsmax sense, of a book being authored by its subject, as in "Airport, the new book by an airport."

It's "new" in the sense that it was published last April, before the election, and before Palin was even tapped as John McCain's running mate. The words "John McCain" don't appear in the index. It has not been updated.

Wait, that isn't exactly true. The cover is different. See if you can spot the change. 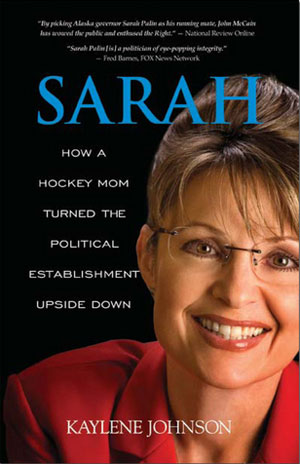 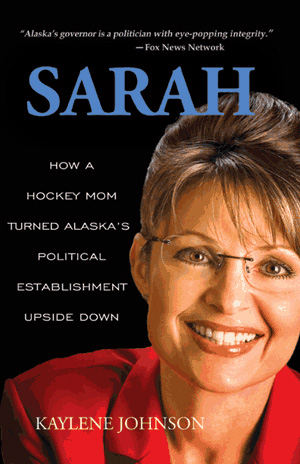 See? It used to be called:

And now it's called:

SARAH: HOW A HOCKEY MOM TURNED THE POLITICAL ESTABLISHMENT UPSIDE DOWN

So it's not really new, so much as revised. And it's revised in the sense that they've removed the word "Alaska" from the subtitle and replaced it with the article "the."

Still, you can't beat the price. Free free free. "Just pay shipping." Which, for a 5.6-ounce book in a large envelope sent First Class via the US Postal Service would be $1.68. Or $5.95 in Newsmax world.

So let's review. By:

GET AN OLD BOOK ABOUT SARAH PALIN, JUST PAY $45!

On a personal note: The Huff Post commenter community points out that I recently used the word "nauseous" when I meant "nauseated." A mortifying mistake. But again, I'm just a hockey mom.