The dragon has been a symbol of China for millennia. The Chinese dragon is not the fire-breathing monster of Western fable. A gentle creature, the celestial dragon flies through the heavens each spring, bringing rain from the clouds to China's farmers after the long winter. The dragon was adopted as the personal symbol of the Chinese emperor. Today, the dragon is a symbol of the People's Republic of China, representing the world's fastest-growing economy and the emerging superpower.

In spite of the fact that most Americans now see China as the next superpower, we know little about the Chinese. The time has come to get to know your dragon. Every American needs a basic literacy in Chinese history and culture in order to flourish in the twenty-first century.

You don't need to speak Chinese to know China -- or even to deal directly with the Chinese. However, without a good dose of dragon knowledge, mistakes and misunderstandings will occur that can sink plans, cause confusion and engender ill will -- at any level.

Let's take a look at how not knowing the dragon caused a series of embarrassing mistakes in the Obama White House. On Jan. 19, 2011, then President Hu Jintao attended a state dinner at the Obama White House. The Chinese delegation requested an American-themed evening. The White House responded by organizing a "quintessentially American" evening with an American dinner menu, decor and entertainment. The evening was described by the First Lady's office as featuring "some of the nation's most recognizable offerings."

I imagine a scene of painstaking attention to every detail by the White House staff -- from planning the flowers to the photo ops. Michelle Obama looked stunning in a red gown, a nod to Chinese tradition in which the color red symbolizes the celebration of happy events. And the White House looked gorgeous. 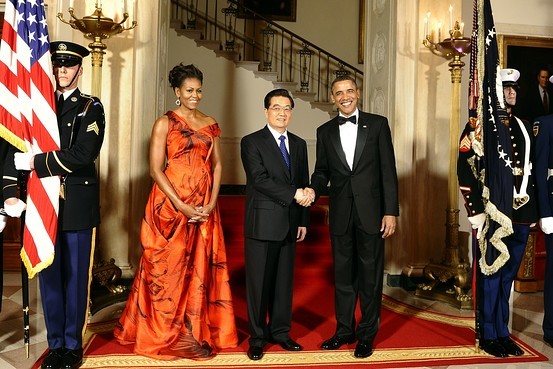 But so many aspects of that evening at the White House revealed a lack of basic knowledge about our Chinese guests that one embarrassment led to another. Here's how it went.

The menu featured American beef (to my mind, the best in the world) in the form of Dry Aged Rib Eye Steak and ended with Old Fashioned Apple Pie with Vanilla Ice-Cream. Furthermore, Michelle Obama's eating healthy and locally grown focus was seen in the White House garden produce and honey harvest used in the meal. This American-themed meal sounds absolutely delicious. But the White House staff should have known better than to serve this meal to the Chinese delegation. 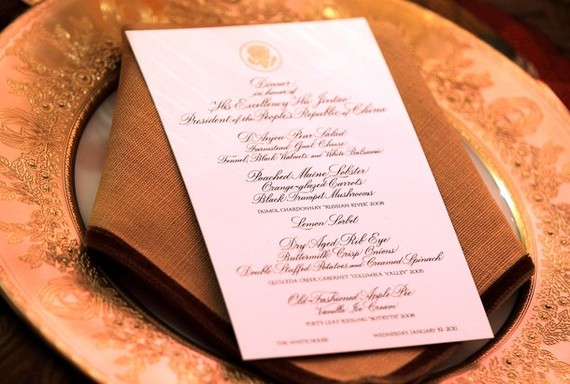 Let's agree that when it comes to OMG Do They Really Eat That?!?! dishes, the Chinese have us beat by a mile. It's often even hard to decipher just what animal is featured in many Chinese dishes. This was clearly experienced by President Richard Nixon during his groundbreaking trip to China in 1972. It was the first official diplomatic contact between the People's Republic China and the United States. Both President and Mrs. Nixon were quite proficient in using chopsticks. This gesture became an element of Chinese-American diplomacy.

The American press at the time pointed out the gesture and its symbolic overture of cooperation with the Chinese. More eloquent than any words is the photo of Nixon about to swallow a bite of one of the dishes served at the banquet in China's Great Hall of the People. My guess is that it's some part of a duck -- but I'm not sure which part -- and neither was President Nixon. 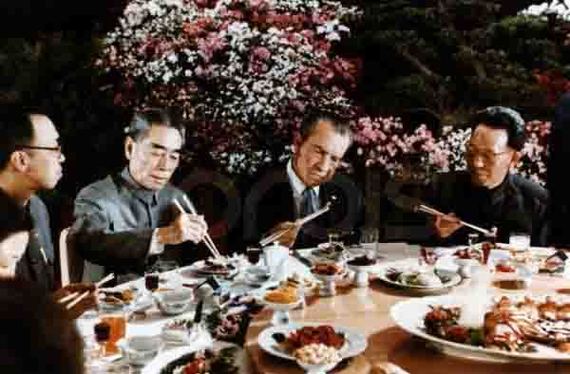 But the Obama White House menu challenged Chinese food sensibilities, as well as Chinese digestive tracts. The meal began and ended with a heavy dose of dairy products. The Chinese, who rarely eat cheese, often find the odor offensive. Moreover, most Chinese are lactose intolerant. Here's a video from Paul M. Choi, MD, a board-certified gastroenterologist, describing how lactose intolerance affects folks with that condition.

Honestly, this looks like a meal designed to encourage the Chinese delegation to get up close and personal with American plumbing. I checked out Martha Stewart's take on the vegetables dishes served with the main course: Double Stuffed Potatoes and Creamed Spinach. Her Twice-Baked Potatoes recipe (serves four) includes 1/2 cup grated sharp cheddar cheese, two tablespoons of unsalted butter, three tablespoons sour cream, and three to four tablespoons milk. Her recipe for creamed spinach (a recipe from Martha's mother, Mrs. Kostyra, serves six) calls for three tablespoons of butter and one cup of milk. Sour cream for serving is optional. Does anybody hear some rumbling from the Chinese delegation? Or have they all run for the White House restrooms? Hope they're back for the speeches and entertainment.

I cannot imagine that the White House kitchen does not understand the limitations and restrictions in the diet of other cultures. Would the Obama administration serve pork chops to the Saudi delegation, or beef steak to the Indian delegation? Dr. Choi says that up to 98 percent of Asian Americans and 75 percent of African Americans experience some form of lactose intolerance. Could Michelle Obama, who focuses her energy on food and diets, be unaware of the Asian issue with lactose intolerance? The White House Executive Chef since 2005, Cristeta Comerford, is Filipino American. She is the first woman to be selected for the post, and also the first of Asian descent. Is she one of the 2 percent of Asian Americans without some form of lactose intolerance?

After the dinner, and certainly within the time it takes for lactose intolerance symptoms to kick in, Mr. and Mrs. Obama escorted President Hu Jintao into the East Room for after-dinner entertainment. The entertainment was billed as "An Evening of Jazz." The audience enjoyed listening to musicians, including Herbie Hancock and the Chinese pianist, Lang Lang.

The musicians performed on a stage between full-length portraits of Martha and George Washington. As the grand finale, Lang Lang played the Chinese song, "My Motherland," embellishing the piano solo with more crescendos and flourishes than rhinestones on a Liberace piano.

My Motherland is a beautiful, but highly political piece of music. It is often referred to as China's unofficial national anthem. The song is featured in the film, Battle on Shangganling Mountain, which tells the story of Chinese soldiers fighting Americans during the Battle of Triangle Hill during the Korean War. In fact, the lyrics of My Motherland specifically make reference to American troops, who are referred to as "the jackal we will greet with a gun." This makes me wonder: Just where were our protocol folks at the White House that evening?

These mistakes at the White House -- where we depend upon folks to know better -- show a lack of Chinese cultural literacy. At the very least, Hu Jintao and the Chinese delegation left the White House confused. If those full-length portraits of Martha and George Washington could speak, I wonder what they would say?

Even in Communist countries, political leaders come and go. Time for a fresh start. In June 2013, newly-elected President Xi Jingping visited the United States on an unofficial trip. The two-day trip to Sunnylands estate, California, was heralded as a chance to heal divisions between China and America and to kick start better relations.

President Xi Jinping was accompanied by his wife, a signal that the new Chinese leader wanted to establish a personal relationship with President Obama. Yet her American counterpart, Michelle Obama, was nowhere to be found. Mrs. Obama remained in Washington, D.C. to take care of some personal affairs. The First Lady's Press Office offered a statement saying that her domestic duties would not allow her to attend the two-day conference. It was the final week of school for her daughters, Sasha and Malia.

Juggling job and family certainly is tough, Mrs. Obama. Millions of American women face these difficult challenges every day. But, when the leader of the world's emerging superpower and fastest-growing economy comes to call, some extra effort is required.

The Chinese were very much looking forward to a meeting between the two First Ladies. Chinese First Lady, Peng Liyuan, is viewed as a glamorous figure, often outshining her husband. One popular Chinese jokes asks: Who is Xi Jinping? Answer: Peng Liyuan's husband.

When Michelle Obama failed to accompany her husband to the summit, the Chinese were disappointed, confused and truly hurt. They saw it as an intentional snub.

I guess that message finally got through, and soft diplomacy from the Obama White House followed. In March 2014, Michelle Obama, both Obama daughters and the White House mother-in-law all visited China -- without President Obama. The Obama ladies visited China at the personal invitation of Chinese First Lady, Peng Liyuan. In Beijing, they were received by both President Xi Jinping and the Chinese First Lady.

The Chinese were charmed to see three generations of Obama family women make the trip, and the Chinese press covered the visit most favorably. Michelle Obama took the opportunity to invite American schoolchildren to join her on her trip via video feed to expand their knowledge of China. Her focus on education, including urging American students to study abroad and learn about other cultures, was well-conceived and delivered. 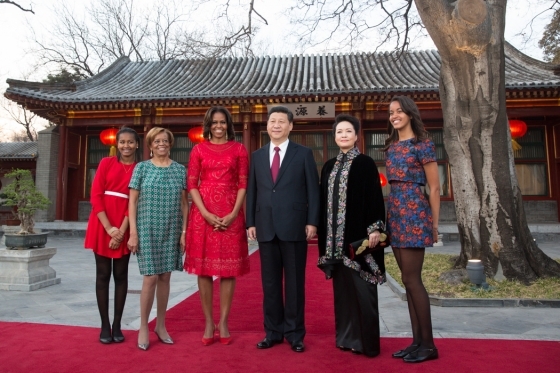 Surely the conclusion to this article must be that the future of the world depends upon how Americans and Chinese get along with one another at every level. Mistakes and misunderstandings will, of course, be made. But acting in good faith and with respect can certainly smooth over those errors. To avoid mistakes requires a basic understanding of China, its history and its culture. As Michelle Obama said to a group of students in China: "I am more confident than ever before in our shared future." Nicely put, Mrs. Obama. Get to know your dragon.