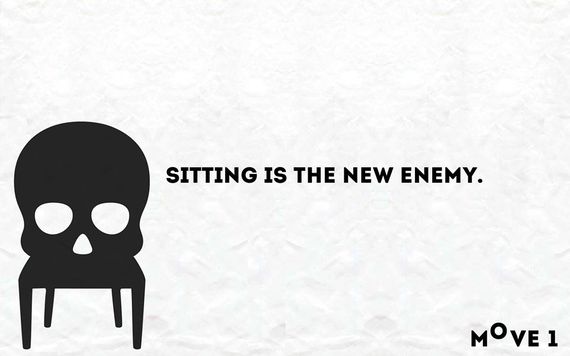 For your sake, I hope you are not sitting as you read this, because as I'm sure you've heard, sitting is the new smoking, according to Dr. James Levine, who wrote a book called, "Get Up!" showing how our sedentary lifestyles are killing our bodies. Two thousand years ago, James, the brother of Jesus, wrote a book making a strikingly similar point: that our sedentary faiths are killing our spirits.

Every generous act of giving, with every perfect gift, is from above, coming down from the Father of lights, with whom there is no variation or shadow due to change...[Be] doers of the word, and not merely hearers who deceive themselves...[T]hose who look into the perfect law, the law of liberty, and persevere, being not hearers who forget but doers who act -- they will be blessed in their doing. If any think they are religious, and do not bridle their tongues but deceive their hearts, their religion is worthless. Religion that is pure and undefiled before God, the Father, is this: to care for orphans and widows in their distress, and to keep oneself unstained by the world. James 1:17, 22, 25-27 NRSV

The book of James almost didn't make it into the New Testament at all. It is not found on the earliest known list of New Testament books and some early church authorities disputed its inclusion. Theologians throughout history have complained about James, most famously Martin Luther, who advocated that it be thrown out of the Bible altogether. Modern Evangelicals criticize what's known as the "works-based faith" James espouses as being inferior to true faith which is found in our hearts, and is more important than doing good deeds.

That is an interesting debate, but why is the book of James so dangerous that it was almost kept out of the Bible altogether? Because talking about the redistribution of wealth is always dangerous. James advocates for the giving of resources from those who have them to those who don't have them -- socialism. James' text is closer to what we know of the sayings of Jesus than any other New Testament letters, and much closer to the prophets of Israel, which Jesus, in fact, was. As Jesus' brother, you might expect that we would take more seriously what James had to say. But we don't much like what he has to say. Caring for those in distress? No one wants to do that. We want to accumulate as much as we can for ourselves, not remain "unstained by the world." We're happy to be stained by the world as long as it's by the green and gold of wealth. What we want to hear is that we should hold on to what we have and keep everyone else out, and that's the message of at least one presidential candidate.

Sadly, we see that same greed even in the church. But as much as James hammers the wealthy, the topic he hits even harder in his epistle is people who don't "bridle their tongues." So I won't call out the abuse of wealth I see in the church mostly due to a healthy dose of self-skepticism. I'm often drawn to texts that criticize wealth and its pursuit -- fortunately, there are a lot of them -- but it's an easy thing for me to do because I stand outside that world of wealth and privilege that many of my brothers and sisters in the church enjoy. And to be honest, my motivations for making those criticisms are much less pure love for those worse off than myself and more a Biblically-sanctioned chance to criticize others just because I haven't gotten my fair share!

But that's where I find James' message so comforting: he doesn't question our motives. He says if you simply practice Jesus' message, if you give away what you have to others less fortunate, it doesn't matter what doubts you may be suffering. Unfortunately, we are much more likely to hear the opposite message, that we don't have to give away our money, as long as we're good people in our hearts, which is much more appealing than being told you're a good person if you give away what you have regardless of any esoteric feeling in your heart.

When Luther criticized James and insisted in the doctrine of Sola Fide, meaning by faith alone we are saved, he was reacting to a corrupt church that understood "works" not as caring for those less fortunate, but as giving money to the church, which was then supposed to take care of the needy. But somehow a lot of that money found its way into church property and clergy pockets, most extremely in the practice of indulgences, essentially a sin tax that magically cleanses your immortal soul. Well, if that is your definition of doing good works, no wonder Luther rejected it. In Luther's time, there were still extremely stark economic divisions, people were basically either dirt poor or one of the nobility, so this was about justice. Luther was saying that being right with God did not require being wealthy enough to give to the church; what mattered was not the power of the church but the power of God working in our hearts and lives. That is a message of hope and it's easy to see why it has been triumphant these past 500 years.

But now it's time to put the division between faith and works to rest. We live in a world drowning in doubt. It is extremely difficult with our postmodern brains and easy access to any and all competing views to believe almost anything, and doubt is our constant, painful companion. But the cure for doubt is not forced faith, drumming up feelings we're not sure we really have. The cure for our aching spirits is very similar to the one for our aching bodies: get up and do something!

This is a justice message for our age, when faith is much harder to come by than good deeds. People practice paying it forward or random acts of kindness all the time, and whenever there's a crisis, we freely open up our pocketbooks. So to insist that you're saved Sola Fide, only by your faith, not your actions, is less a beacon of hope for those unable to afford giving, and more a way to judge other people for their lack of faith. James gives us an equalizer for today's pluralistic society -- if you see someone helping out those less fortunate, you don't need to worry about what they feel in their hearts, what race they are, whether they're gay or straight, what religion they profess or don't profess because you can see with your own eyes, they are practicing religion that is pure and undefiled before God.

God does not require good deeds to love us, but rather we experience our salvation in the here and now -- relief from all our nagging doubts -- by getting up and getting involved. What James knew is something T.S. Eliot discussed in "Hollow Men:"

There is a shadow between what we intend to do and what we actually do or don't do. James says to us, "Ignore that shadow and go straight to the action. You don't have to believe the right things or be pure of heart for God to love you. Doing a kindness for someone in need eliminates the shadow."

We are entering the fall season when everything speeds up, then fast on the heels of fall will come the Christmas shopping season, and then, Lord help us, more than a year of the election season, so there will be many voices competing for your attention, both in your life and in the media, but all these voices will really be saying the same thing: "You need more. You need to buy more, you do not have enough, therefore you are not good enough. I have the answer, buy my product, vote for me." I hope that if you find yourself feeling overwhelmed by these voices, you will stop to consider the voices of those whom James would have us listen to, the poor, the left out, the lonely. What would they be saying to you? I imagine instead of telling you that you have nothing to give, they'd be saying you have everything to give. You have the capacity to be generous, which is perfect the way God is perfect: God the Father of Lights, in whom there is no shadow. So be doers of the word who get up and act and be blessed in your doing.