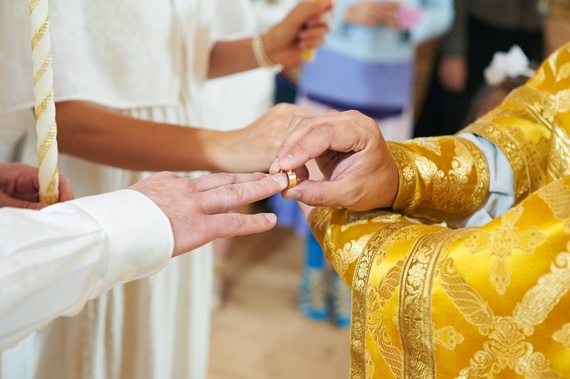 Pope Francis announced cardinal changes to the church's annulment procedure last week, making it easier and cheaper for Catholics to dissolve a marriage. The reforms, which involve eliminating a second tribunal review and offering a 45-day fast track option, will streamline a process that Catholics have long considered too arduous, costly, and bureaucratic.

In the U.S., roughly 11 million Catholics are divorced, and many have given up on the chance of pursuing an annulment, or church-sanctioned separation. But these new reforms may re-open the church doors for couples who chose to amend their vow 'till death do us part'. While reaffirming that the marriage bond is still indissoluble, Pope Francis added a new twist: "charity and mercy demand that the Church...be close to her children who consider themselves separated." Many Catholic Vatican visitors welcomed the compassionate angle, saying: "Times change, relationships change, everything changes" and even within tradition there can be room for adaptation and growth.

One element of the Pope's forgive-and-forget campaign, according to Professor Candida Moss, is based on "the reality that many modern marriages are undertaken without full consideration."

And this is actually becoming a familiar message: A recent national survey found that two of the most common reasons for divorce are marrying too young (46%), and lack of preparation for marriage (41%).* What's more, neuroscientists are now suggesting that adult brain development doesn't peak until our late twenties (at least). That means that most of us have made life decisions without full consideration, and it's completely normal. But rather than burying ourselves in remorse over a "mistake", we can also re-brand our message: mistakes are valuable, they're what make us human. And before we can truly learn from our old choices, we have to keep pushing on that compassionate message until we can truly forgive ourselves.

In many ways, the right to marry and the right to divorce are two sides of the same coin. But as a culture, we've locked ourselves into emotional absolutism; staying together equates to success and divorce means failure to commit. But these papal reforms tell another story; they're a spark of recognition, from one of the largest religious institutions in the world, that a marriage doesn't have to end in shame. What if divorce isn't a failure of morality, but a choice, that in many cases, protects the institution of marriage by further refining its boundaries. As we continue to err, recover, and grow, we improve our way of being in relationships, and our ability to choose partners that inspire our highest good. To me, this refinement shows the highest respect of marriage and the sacred bond it instills, with full consideration.

Mediation can help Catholic couples get on the fast-track

At Wevorce, we've also been working to streamline the end of marriage process; aiming to make it less painful, less time consuming, and less costly. We strive to give clients the choice of closure, without the traditional wallet-draining and gut-wrenching court battles. We're working toward a culture of forgiveness, but there's a lot to be done, especially battling the realities of divorce shame that make amicable separation feel out of reach. I'm hopeful that these compassionate reforms signal a new age of self-acceptance for people of all faiths, helping us to drop the old divorce story in favor of an open-door policy toward change.

In my experience as a divorce professional, both as a litigator and mediator, I've seen a consistent pattern among my clients: one spouse initiates the divorce, and the other is left in reaction mode. This dynamic throws each person into a different emotional state, one that can dictate their decisions; the reactor is often drowning in grief and denial, and may resist even if they know deep down the marriage is over. It is widely acknowledged that there are emotional roadblocks that interfere with an amicable separation, even if it starts with both spouses on the same page. Mediation can be a helpful tool for Catholic couples who wish to pursue the expedited, fast-track path, to engender agreement toward a common goal: a simple and quick annulment.