From bearded indie rockers to hipster barkeeps, facial hair is in. And with it come rumors of a holy renaissance. Men and women everywhere are rediscovering the hairy lore of church history, the long curly whiskers of the saints, the bearded patriarchs of the Bible, and how our own spiritual lives can be gnarly and unclipped.

What is more spiritual than facial hair? Socrates and Plato sported the philosophers beard, King David was the first of the bearded poets, and who can forget the gross and swarthy beard of Jesus of Nazareth? Jesus immortalized the beard. To this day, no matter how many centuries have passed since his ascension, growing a thick beard is a pastime for holy men (and maybe even a few women).

There are no harder working beards in church history than St. Augustine and St. Maximus the Confessor. Their beards were magnanimous. St. Clement said the beard is a saint's "natural and noble adornment." Google St. Gregory of Nazianzus, and you'll get the idea: the longer the beard, the holier the saint -- and good Gregory's entire face was a fluffy, white, Santa beard. "The glory of a monk," it has been scrawled, "is a beard fully grown."

Today, Christians around the world are rediscovering the wisdom of Baptist preacher Charles Spurgeon, who claimed that growing a beard is "a habit most natural, scriptural, manly, and beneficial." It is rumored that when Spurgeon preached, he didn't even have to use words; his beard knocked parishioners over cold.

In days of yore, saints with facial hair were considered wise, holy, chaste, even virile. Men shaved only as a sign of mourning. But in modern times, beards became increasingly associated with a lack of cleanliness or a loss of refinement. It all started in the 17th century when philosophers like Descartes, Locke, Newton and Bacon shook their fairy godmother wands and said, in so many words, "The world is now a machine." Slowly, bald rationalism replaced wooly mysticism. The spiritual life was sent to the barber to be shorn. In 1698, Peter the Great even ordered all Russian men to shave. He levied a beard tax with the hopes that Russian society would be as disbelieving as Western Europe.

It worked. By the 19th century, there were more skeptics than saints. "The beard is dead," said Neitzche, and he promptly grew a moustache.

"It performs no useful function; it is a nuisance and a discomfort; all nations hate it," wrote Mark Twain, perhaps bewailing the lack of saints in the modern era where "all nations persecute [the beard] with the razor." Indeed, the disenchantment of Modernity calls to mind the words of the prophet Isaiah: "I gave my back to the smiters, and my cheeks to them that plucked off my beard" (Isaiah 50:6).

But the beard lives on. True, the so-called Enlightenment announced that the universe is like a complicated clock and the human brain like a machine. But even Charles Darwin grew such a gorilla beard one wonders if it preserved within his breast the magic and wonder of the "Olde World." From Moses and Abraham to John the Baptist and St. Peter, Godly men have spared the razor and groomed the beard.

Don't let doubt pluck out your beard. Too often we don't grow more than a five o'clock shadow because we romanticize our doubt. We quote clean-shaven poets who make our fingers pointed to the heavens, bent in the shape of question marks, seem a lovely thing. But to doubt is to pretend that we are kind of a big deal. Reality is not waiting for our yea or nay. God is not Sigmund Freud. He is not taking notes while we lie here, like we are, swooning on our couches.

Those of us who love to doubt are indeed in love -- with our doubt, "ever learning, and never able to come to the knowledge of the truth" (1 Timothy 3:7). Romanticized doubt is an overblown view of one's self. It is idolatry. You say you want to see some evidence? The bearded saints of yore say to you: Thou hast a wimpy picture of divinity. God is not a clown at a circus. He is not bacteria in a Petri dish. Jehovah is not the summation of an equation. He is not the ergo of an argument.

Men of old sought to justify man before God. Today we do just the opposite. We try to justify God before man. We attempt to assert his existence by proofs; yet we forget that we can only prove his existence by worship. Argument can make God at best probable. God is not an x, itself explained, explaining nothing.

Let's take our queue from the indie rockers and grow our beards long again. We do not need proofs; we need what the old-timers called ghostly strength. We need faith, and faith must be lived.

Imitate the faith of Abraham. Consider his beard. Just look at that thing. Awe inspiring. He's the proof and the paradigm of faith. With a beard like that, who could expect anything less?

The beard is not dead, no matter what the Neitzche says. When we become life-long students of Jesus, we can be part of a holy renaissance -- a God renaissance. A renaissance is when new vision and vitality rush into old truths and traditions. People see themselves as part of something bigger and more beautiful. They start to care, really care, about the triune God and what it means to be human. People wake up. Minds and hearts come alive. The Gospel is lovingly proclaimed. History is changed.

From one hipster to another, here's something to text about. God's salvation plot continues, and we can be a part of it. Find inspiration in those apostles and saints who have gone before us, and may your faith grow as long as their beards. Let it grow long and white. Leave it wild and untamed. "Lord, I believe. Help my unbelief."

Get Your Beard On: A Call to Untrimmed Spirituality in a Clean-Shaven World
Bearded Gospel Men 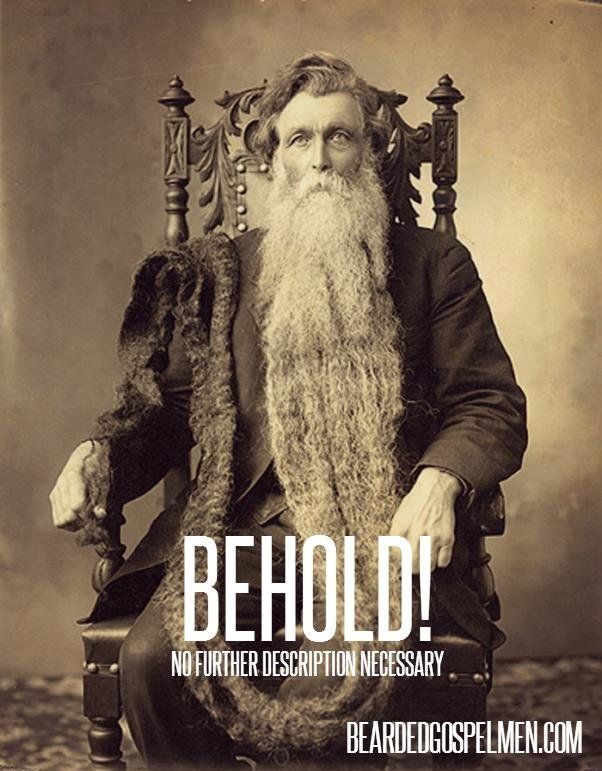