At the risk of bringing down the digital wrath of blog-savvy oldsters, I've noticed that a considerable number of the anti-reform Republican "hooligans," as Rachel Maddow describes them, who turn up at various town hall meetings to shout incomprehensible loud noises just happen to be senior citizens. And while the old people who turn up to protest health care reform are, to some extent, victims of the usual Republican lies and disinformation, they're still adults and therefore responsible for their opinions, their actions and their ziplock baggies filled with crazy.

Yes, they've been tricked by Glenn Beck and Rush Limbaugh into believing that health care reform will somehow involve golden-grilled ACORN thugs showing up at bingo with a tray of syringes filled with black liberal death juice. Yes, they've been tricked by Sean Hannity and Lou Dobbs into thinking that this "halfrican American" president with his terrorist pals and Kenyan birth certificate is trying to supplant God's U.S. government with a liberal fascist homocracy. 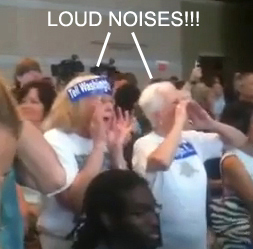 But failing to grasp the extraordinary contradiction evident in receiving Medicare benefits while simultaneously shouting nonsense about "government-run health care" is quite simply inexcusable.

President Obama at a town hall meeting last week described a letter he received from a Medicare recipient:

"I got a letter the other day from a woman. She said, 'I don't want government-run health care. I don't want socialized medicine. And don't touch my Medicare.'"

Someone reportedly told Inglis, "Keep your government hands off my Medicare."

"I had to politely explain that, 'Actually, sir, your health care is being provided by the government,'" Inglis told the Post. "But he wasn't having any of it."

It's no wonder with "very serious" analysts like Arthur Laffer are appearing on CNN and saying things like this (and getting away with it unchallenged):

"If you like the post office and the Department of Motor Vehicles and you think they're run well, just wait till you see Medicare, Medicaid and health care done by the government."

Yeah, just wait until the government gets its mighty robot claws on Medicare and Medicaid -- snatching control away from, you know, the government. (Incidentally, the post office is amazing. As Maher said recently, anyone can drop a letter into a blue metal box on the sidewalk and in a couple of days it arrives at the place listed on the envelope. For 44 cents. Off the top of your head, can you name anything that costs 44 cents and actually functions exactly as advertised?)

I can only hope that the Keep your goddamn government hands off my Medicare! people are exceptions and that a vast majority of Republican seniors understand that Medicare, Medicaid and the Veteran's Administration are all government-run health care systems. Put another way: they're actively and willingly participating in socialized medicine. So the seniors who understand the facts about the Medicare system and yet are screeching at town hall meetings about government-run health care are, well, insert your favorite colorful synonym for "freakishly colossal hypocrites" right about here.

Either these people have been so kerfluffled and enraged by the wingnutty "reparations" and "killing old people" lies they're hearing on AM radio that they've forgotten about the source of their current health insurance coverage, or they're fully aware of the fact that they are, indeed, beneficiaries of socialism, but they refuse to allow anyone else to participate in a similar program. You know, because socialized medicine is bad. Except for them.

Take this guy for instance: 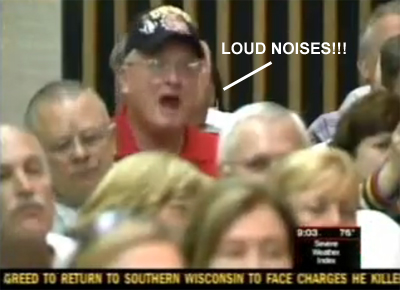 He's one of several elderly protesters shouting in tongues at a town hall held by Rep. Steve Kagan (D-WI) this week. And based on his obvious age and USMC cap, we can deduce that he's very likely receiving medical coverage from the government in the form of Medicare or the Veteran's Administration or both (you can do that). I'd wager, too, that he'd be totally unwilling to give up his coverage. He'd be *cough* crazy to do that.

Or, to paraphrase various wingnut emails I've received, perhaps this old timer ought to get a job instead of freeloading off the system. I mean, why should I pay taxes to finance this guy who refuses to work? Of course the realistic answer is that healthy Americans of any age who aren't spending thousands of dollars a month on gouged health care premiums tend to strengthen both our communities and our broader economy -- including my best interests as well. Rising tides, lifting boats and all that. Another argument I've heard, by the way, is that seniors and veterans have earned their socialist health care. To which I usually respond: I see. So socialized health care is a reward for a job well done? Can I quote you?

I don't claim to know the full stories behind the variety of senior citizens who have been recruited to disrupt these town halls, but one thing is clear. They're participating in a corporate lobbyist-driven campaign to prevent the rest of us from acquiring the same affordable, reliable public health care they enjoy. In other words, their government-run health care is excellent. So excellent that it can't be shared. And they're so intensely motivated in this selfishness that they're volunteering their time to infiltrate town hall meetings and loudly ambush public officials at the request of lobbyists who are very simply lying to and exploiting them.

With all due respect to their chronological age, shame on them.