I grew up loving math. I was good at it, got A's in it, and even took special weekend classes with my amazing Algebra teacher, Ms. Moser, to do math for fun! Yep, I was the one tutoring seniors in my Geometry class because I got it. And what's more, I enjoyed it. Neither of my parents are math-y, per se, but they generally gave me the sense that if I worked hard, I could learn anything. So, it was no surprise that Ms. Moser highly recommended me for honors math when I abruptly decided to leave my hometown in Iowa and go to a fancy East Coast boarding school. (How that transition went is another story, probably a novel.) I headed off to boarding school confident in my mathematical prowess. And when I left three years later, well, I opted out of Calculus for a course in Romanticism. Let's just say I lost my appetite for math. How did it happen? 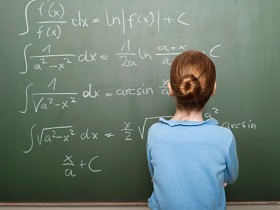 Everything at boarding school was a shock for me. But my math class topped them all. For starters I found my teacher, Mr. Phelan (or, as the kids called him, Mr. Fail 'em), to be completely incomprehensible. But that was just me. In my class, there were 10 other students, all boys, who seemed to speak his language. My parents gifted me a wonderful well-rounded childhood that served me well at home, but in a rarefied environment, I suddenly wasn't good enough. The kids in my class all had attended private schools from an early age, and it seemed like they were learning Trigonometry in the womb!

I remember going to my teacher's office every day for extra help. Heck, my dad even called to talk with him. But in the end, I was out of my league, and my teacher graciously awarded me a D. I was devastated. And worse, I became convinced that math wasn't for me. Because it's acceptable to say that. It's acceptable for us to say, "I just am not a math person." And even in my regular classes that I took for proceeding semesters, I might have performed well, but my heart wasn't in it. I avoided taking Calculus, and literally took zero math classes in college.

Recently, I read this article in The Atlantic about the myth of being innately "bad at math," and how performing well in math is generally a result of hard work, not innate skill. By all accounts, I should have known this, but it only took that one semester to break down years of confidence in my aptitude. In the article, the author notes several patterns we see that reinforce this myth. The one that resonated most with me was as follows:

"The well-prepared kids, not realizing that the B students were simply unprepared, assume that they are 'math people,' and work hard in the future, cementing their advantage."

And the B students (or in my case D student), well, they assume it's about skill level and from that point forward it's a self-fulfilling prophecy.

My mentor convinced me to apply to business school, and when he asked why I wouldn't apply to Wharton, I said, "too quantitative." I was scared. But he convinced me to apply, and after a crash course in Calculus, I learned that if I worked hard enough, indeed I could have success... even when my classmates were so-called quant jocks.

For me, it worked out, but for millions of kids in our education system, the ending isn't so happy. Instead, parents determine at a very young age that a child has or does not have math skills. And, I would argue, they -- we -- do the same with reading. We decide that it's one or the other, left or right brain. Instead, we can acknowledge our kids' struggles with a particular subject, while continuing to encourage and remind them that a consistent effort can make a tremendous difference, but it takes perseverance.

What do I wish my teacher had done? I wish he had told me that I could do everything my classmates were doing, but I lacked the preparation before I ever stepped foot in his classroom. If only he had instilled that confidence in me, that simple knowing that I could do better, who knows what else I might have tackled coming out of high school.

When I watch my son struggle to learn his letters slower than his classmates, I hold this story close. It's not innate. It's effort, and time, and a dedicated community of parents and teachers working together to ensure our kids reach their full potential.

Here are three things my husband and I plan to do as our children grow up:

How do you help your children reach their full potential?

Chief Mom and Co-Founder at Zoobean