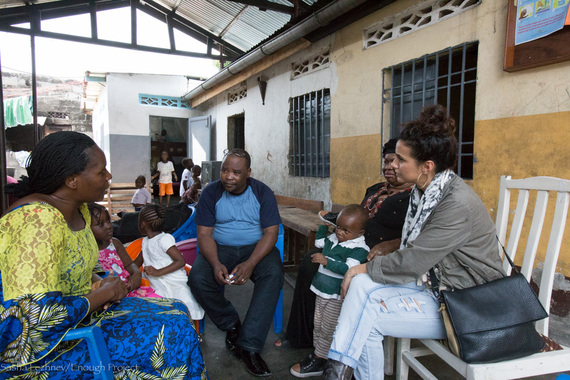 The morning started quietly. The day before, the heavens had opened up like we had never seen them do before, unleashing thunderous rain that filled Kinshasa, the Democratic Republic of Congo's mega-city capital of 12 million people, with floods, river-like roads, and floating garbage. Today the city reeled with the effects of that rain as we traveled to one of its slums, Makala. Today we drove not on roads, but on brown fields and streams of mud. The slum smelled of waste, of the garbage not picked up by the city, of the meat carcasses that hung outside in butcher shops.

We just returned from the Congo, and what we saw on our trip to Congo last month was heart-wrenching yet life-changing, and it lit our fires. What we saw in some places was close to hell on earth, but we also saw immense courage and hope from women and men fighting to change the system. The common thread that wove together our many meetings throughout the trip was impunity, or getting away with it -- getting away with sexual violence and other serious crimes.

That morning, we arrived at the Secam orphanage, the only one in the city that accepts infants. Secam is run by Felicity, a strong Congolese woman who was like an angel. It was very difficult to see. There were children everywhere: 3-4 babies to a crib, some of them HIV positive. Many of them were abandoned because they were the result of sexual violence. There was a room of 2-3 year olds lying on a dirty, dusty floor. That was just a tiny example of the way sexual violence has affected communities, families, and individuals in Congo.

Then we visited a rape recovery center, run by the Congolese organization Lizadeel. It was a shack, 115 degrees inside and as humid as a monsoon, probably the hottest place either of us had ever experienced. There were girls as young as 13. One of them, Jackie,* 15, told her story. She had been raped night after night by her father and then impregnated. He then tried to beat the baby out of her, so that no one would find out. Jackie looked intently at us after telling the story and said: "Please don't forget us when you go home." The shock was strong; we couldn't speak.

As bleak as this was, it also called us to action. Many, many perpetrators get away with rape. Hundreds of thousands of women, children, and men have been raped during the decades-long conflict in eastern Congo, two in five women as of 2010, according to the American Medical Association. Armed groups and army commanders have used rape as one of their weapons of war in eastern Congo, and most of them have gotten away with it without consequence. And beyond the armed conflict in the East, sexual violence remains a critical issue for all of Congo, as we witnessed in Kinshasa.

This has started to change a bit, thanks to activism and Congolese groups like Lizadeel. Several new cases were prosecuted by the military courts, including a General and two Colonels. Lizadeel helped successfully prosecute over 900 rape cases in 2015 and provided psychological help, taught girls skills like dressmaking to generate an income, and educated men about sexual violence crimes and how they must play a role in ending this crisis. Lizadeel, Dr. Denis Mukwege of Panzi Hospital, and other courageous Congolese activists are an example of what the wave of the future in Congo needs to be.

But we are still very far from a real solution to impunity for rape and other serious crimes in Congo. There is still significant political interference in the justice system. If you have money, you can often buy your way out of jail time. The trial for 76 rapes by army soldiers at Minova, eastern Congo, was undermined by inadequate investigations and due process violations, and it only resulted in two convictions for rape. There has been no independent judicial investigation into the rape of girls as young as 4 in Kavumu in South Kivu. The vast majority of army commanders from countries like Rwanda, who invaded Congo or supported rebel groups, have not been prosecuted. And rapists and other criminals are often broken out of jail far before serving their sentences. Sexual violence cases are increasing in Kinshasa.

The Obama administration must do more to help change this equation. First, it should continue to strongly urge the Congolese government to pass the law establishing a justice mechanism that incorporates both international and Congolese jurists for grave crimes, known as the Specialized Mixed Chambers. That proposal is widely supported by Congolese civil society. Second, the U.S. should press Congo's military to vet all army officers for sexual violence crimes. Third, the U.S. should use all means available to help make sure that national elections take place with as short a transition as possible, since improved democracy will help increase accountability. And finally, you can contribute to solutions by joining the growing Raise Hope for Congo movement that has frequent calls to action to change the equation in Congo.

There is something fundamentally wrong when rapists and other serious criminals get away with it. Without justice, Congo will never truly heal.


*Jackie is a pseudonym used to protect her identity.

Emmanuelle Chriqui is an actor and activist, having starred in Entourage and multiple films. The piece was co-authored by Sasha Lezhnev, Associate Director of Policy at the Enough Project, an organization that conducts field-based research and advocacy on the drivers of conflict and corruption. The Raise Hope for Congo campaign is housed at the Enough Project. Learn more at www.enoughproject.org.