Getting back to full employment -- not debt, deficits, sequester, debt ceilings -- is what we ought to be talking about (along with R&R, of course). I'm happy to say, in fact, that in my travels outside this benighted town (D.C.), it's the question I get asked most often ("Why isn't Washington doing anything about jobs!!??").

What do I mean by full employment? Well, there's the NAIRU definition (Non-Accelerating Inflationary Rate of Unemployment) -- that's the lowest unemployment rate consistent with stable price growth, estimated to be 5.5 percent right now by CBO. Is that the right number? Probably not -- we've historically set the NAIRU too high, a bias that worries more about high inflation than weak job growth. Note the class bias embedded in there--high inflation hurts asset-holdings more than high unemployment, the latter of which hurts wage earners more; though spiraling inflation hurts everyone.

I'd define it -- full employment -- more by contemporary movements in key variables: it's the unemployment rate consistent with broadly rising real earnings, or the rate at which resources are fully engaged in the economy such that lower unemployment would not engage more people (or capital), it would just raise prices.

But, whatever. I'd be perfectly happy to go with 5.5 percent for awhile. So how do we get there from here?

Of course, the first thing is to get the macro policy right, and I go on about that enough about that in these parts already. Dean Baker emphasizes dollar policy here as well: the trade deficit is a drag on growth and factory jobs, so that too is a target in the quest for full employment.

But for this post, I'd like to focus on something else, motivated by the chart below, one I've posted before. It simply plots private sector job growth against productivity growth. Up until about 15 years ago, you could have nicely employed this picture against your Luddite friends who complain about productivity killing jobs. 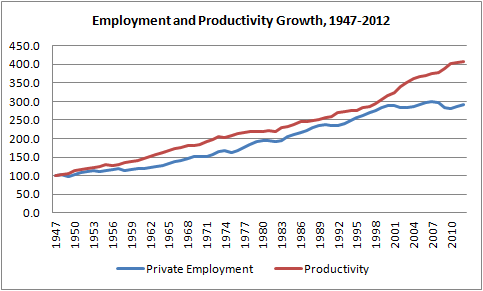 Until then, the two lines largely grew together. Yes, we were more productive, but growth resulted in higher demand that fed back into the economy's job-creation function in ways that boosted job growth. The income and wage benefits of growing productivity certainly haven't reached very far down the income scale since the late 1970s--that's the inequality story. But even as inequality grew in the 1980s and 1990s, job creation largely kept pace with output per hour.

That hasn't been the case since, and it is a matter of grave concern. The reasons go beyond my scope here, but a prime suspect observed at the crime scene is an acceleration of labor-saving capital investment, like robotics (see Brynjolfsson and McAfee for incisive work on this question).

Here, I want to introduce a different solution, one that isn't better fiscal and monetary policy to maximize growth. It's direct, public job creation. That is, if the private sector can't be counted upon to generate the needed job opportunities to absorb our labor supply, then there is a role for government to correct this important market shortcoming.

Even in good times, disadvantaged groups of workers have very high unemployment rates, and recent research has found that the long-term unemployed, a group that became historically large in this downturn, have particular difficulty getting back into the workforce. So even if we didn't have the structural changes in "labor-saving technology" (sounds awfully benign when you put it that way) that I suspect are afoot, we would need to move in the direction of more publicly supported employment.

What, specifically, am I talking about? Not so much a bunch of guys setting up camp in the woods and building stuff circa the 1930s, though that worked well at the time (this link by Johnson et al provides a very useful overview of this topic re: publicly supported jobs):

...the WPA achieved remarkable scale by putting more than 3 million unemployed Americans back to work at its peak in 1938. Its most enduring legacy is found in its contributions to the nation's infrastructure. Under the program, the nation built or reconstructed 617,000 miles of new roads, 124,000 bridges and viaducts, and 35,000 buildings. It also financed a wide array of other labor-intensive work projects, including the construction of sidewalks, street curbs, school athletic fields, parks, playgrounds, and landing fields as well as national landmarks such as the Philadelphia Art Museum and New York City's Central Park Zoo and LaGuardia Airport.

But those days have passed, I think, and contemporary direct job creation programs are not limited to public sector jobs. A more common model today is subsidized work, often in the private or NGO sectors. The TANF subsidized jobs program during the Recovery Act is a good recent example of an effective, though small, program that placed over 250,000 low-income workers in 2009-10. As Pavetti et al report, the program worked with private and government employers to create "new temporary jobs that would otherwise have not existed."

That's important because a worry in this context is that you'll just displace unsubsidized workers with subsidized ones, meaning no increase in employment and an inefficient gift to employers. The TANF program, which had wage subsidy rates up to 100 percent, significantly reduced hiring costs, encouraging business to "hire new workers they otherwise would not have hired."

What did they do?

...the majority of the subsidized jobs provided through the TANF EF programs were provided by private-sector businesses, although many programs provided both public- and private-sector job opportunities to unemployed individuals. The positions in the private sector in which individuals were placed were extremely diverse, including administrative, sales, construction, customer service, food service, and health care.

In addition, nonprofit service agencies that faced unprecedented demand for their services were able to use subsidized employees to assist more people. Some human service agencies were able to use subsidized employees to help meet the increased demand for assistance... For example, San Francisco worked with their local unions to develop a paid, temporary government trainee position that allowed participants to build their skills for the future. Alabama worked closely with the Department of Corrections to provide temporary staff for that agency.

There's obviously a ton to be done, both in terms of infrastructure (upgrading and repairing public goods) and services, and while displacement must be prohibited and monitored (and punished, when it's exposed), research suggests that a lot of what happens here is you pull forward a hire that might have happened later or nudge an employer at the margin of a hiring decision to go ahead and pull the trigger.

I'll have a lot more to say about this in coming weeks and yes, I know it's way outside the current political box. But this relatively new gap between employment and productivity will only exacerbate the old gap between income and productivity unless we begin to think and act outside that box on ways to achieve full employment. Direct job creation is part of the answer.