This summer, Pope Francis will issue a papal encyclical on the environment. In a year of unparalleled importance for climate change because of key UN meetings in Paris this December, his timing couldn't be better.

The encyclical will not only represent a key step forward on climate and environmental issues within the Catholic community. It will be a document that people of all faiths can use to increase the attention paid to climate change and the environment in their own communities.

Pope Francis himself recently announced that the encyclical will be released in early summer, prior to the Paris talks. For 20 years, world leaders have made these negotiations an exercise in futility, despite consistent leadership from the UN. Scientists widely agree that we need a strong agreement out of Paris to have a prayer of keeping global warming below devastating levels. Pope Francis is doing his best to help create a positive outcome.

The two previous popes wrote extensively on environmental concerns. Pope Francis himself has referred to climate change in numerous speeches. But a papal encyclical, one of the highest forms of Catholic teaching, is different. By addressing these concerns in this format, undiluted by other concerns, the Pope makes the topic unavoidable for Catholics globally.

Once the encyclical is released, it will be shared throughout the Roman Catholic Church and incorporated into the Catechism of the Catholic Church, the foundational document for the moral formation of the world's 1.2 billion Catholics. The Church will have a high-status statement that engages the entire Catholic community on climate change, putting the environment squarely on the church's agenda for the foreseeable future.

Good for Non-Catholics Too

An essential document for Roman Catholics, the encyclical will also be influential for other Christians and people of all faiths and good will. When the encyclical makes headlines, diverse faith leaders globally will want to highlight their own traditions' eco-teachings.

This is good, because over the past two decades, eco-theologians globally have articulated values deeply consistent with the themes that Pope Francis can be expected to share. With an eye to the Pope's past speeches and writing, here are several likely themes of the encyclical, with points of connection to other faiths.

Advertisement
Pope Francis will likely place the environment in the context of traditional Catholic doctrines on the rights and dignity of the human being, including previous teachings on birth control, gay marriage, abortion, euthanasia and the death penalty. There will be a great deal of continuity between the encyclical, what previous popes have said on the environment and what he himself has already stated. What will be new is the depth of support the pope provides on this issue, demonstrating that unchanging spiritual teaching can adapt to address great turning points in human history.

Getting Behind Pope Francis

People around the world will want to celebrate the encyclical's release. To help channel this enthusiasm, OurVoices, the international, multi-faith climate campaign, will be facilitating an inter-religious response, sharing the perspectives and reactions of people from a wide range of traditions and circumstances.

Growing numbers of people of faith are united behind a strong agreement at the Paris meetings. Pope Francis is adding his voice through the most powerful means at his disposal. Given the critical importance of 2015, all faith leaders should do the same, urging world leaders to commit to halting the destructive trend represented by climate change and creating an authentically prosperous future for all. 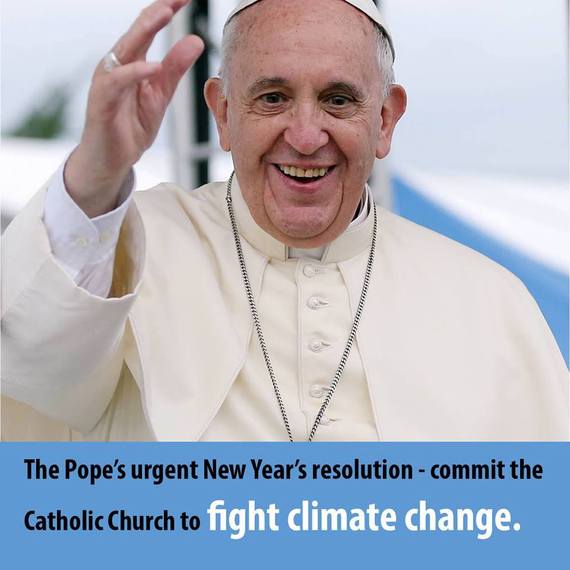