Running a social enterprise can be tough, and not only because you take a path less trodden. Being a social entrepreneur means you are often trying to figure out how to deliver vital products and services to communities that are extremely poor and isolated and who have little or no access to basic infrastructure.

The people at Global Social Benefit Incubator (GSBI) have been helping promising social enterprises overcome these challenges since 2001. GSBI is like a condensed MBA, with two weeks of workshops and lectures, networking opportunities, and social activities. Intensive support from talented and successful mentors from Silicon Valley during the evenings helps to cement business lessons once the classes for the day are over.

GSBI selects social enterprises which have already completed a proof of concept and have the potential to start growing rapidly. The focus for GSBI from 2010 till 2012 is 'energy for the underserved' and competition for selection to the program is fierce. I had the privilege of attending this year and one of the most valuable things for me was meeting an amazing and talented group of social entrepreneurs from all over the world. More detail on the whole class can be seen here, but here is a taste:

Solar Ear manufactures inexpensive solar powered hearing aids for the poor. Their hearing aids are not only a fraction of the price of alternatives, but can also be used by people without access to electricity.

Promethean Power Systems saw that an enormous amount of milk in rural areas of India spoils before it gets to market because there is no refrigeration. So Promethean invented a solar powered milk chiller to prevent milk spoilage which not only reduces transportation costs by half, but also means rural dairy farmers increase their incomes.

Movirtu has developed a cloud phone for the poor. Think of the way you don't need to own a computer to access your email - well Movirtu's software allows those not able to afford a cell phone (yes, there are billions of people who fall into this category) to have their own phone account which they can access simply by 'logging in' on other people's phone.

WE CARE Solar has developed a 'solar system in a suitcase', which provides power for light and emergency communications for maternal health wards in developing countries without access to reliable electricity. WE CARE systems significantly reduce the mortality and morbidity rate during labor and delivery.

GSBI helped me understand what it will take to reach a million people. A million is a big number, but for many social entrepreneurs, the potential market of people needing their product or service represents hundreds of millions, if not billions of people. To make a real dent in these numbers, you need to think big. I look forward to seeing how many dents the GSBI class of 2010 can make. 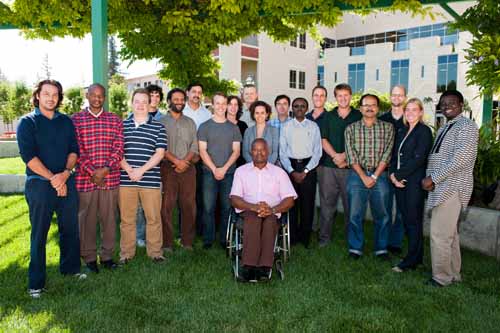 Hugh Whalan is the CEO of Energy in Common, a non-profit which delivers packaged solutions to microfinance institutions so that they can profitably develop and expand micro-energy loan portfolios.