The fact that we are dealing more and more with BSL (Breed-Specific Legislation) in this country truly blows my mind. To me, it's racial profiling and discrimination in no uncertain terms. Entire breeds of dogs, like American Staffordshire Bull Terriers (better know as Pit Bulls), Rottweilers, Doberman Pinschers, Chow Chows and German Shepherds, are being either banned from cities and states, or even worse, euthanized because of the acts of a few "dangerous" dogs. It's not the solution and the people behind this type of legislation are not addressing the real problem -- individual vicious dogs and the irresponsible owners who create them.

In my work on the I'm Tired of... campaign, which raises money for important world causes, I'm exposed to so many issues, some that pull at my heartstrings and others that make me angry -- BSL does both in a big, bad way. The "I'm Tired of BSL" bracelet is new for us, with funds going to Best Friends Animal Society's Stop BSL program.

We've worked with Best Friends for a while now as the charity beneficiary for the "I'm Tired of Animal Cruelty" bracelet, so we trust that this great organization is doing all the right things to aggressively fight this specific form of animal abuse.

If you're not aware, in a nutshell, BSL is a statute or regulation directed towards one or more specific breeds of dogs deemed "dangerous." These laws literally prohibit anyone in the specified area to own designated breeds or they impose extreme confinement and control of said breeds. BSL has sparked quite the debate. Those who oppose it want legislation to be directed towards dangerous dogs and reckless owners, not entire breeds.

You have to ask yourselves how these so called "scary" breeds got their "bad rep" in the first place. In my opinion, it's largely a "vicious" circle. Dog fighting and attacks get a lot of attention in the media because they're violent crimes. When Michael Vick's dog fighting escapades were uncovered, Pit Bulls were all over the news, shown horrifyingly attacking each other. But, what the media attention accomplishes, in part, is to pave the way for more unstable humans to buy the breeds for all the wrong reasons. Then we get more bad news involving the same breeds.

Come on...do we really think that all Michael Vick's Pit Bulls were born vicious or could it possibly have had something to do with how they were trained by his "people?" And, how many movies have we seen with snarling, teeth-baring German Shepherd guard dogs behind fences, trying to attack intruders. Does that mean that all German Shepherds are like that? What about the German Shepherds who serve as sniff and rescue dogs or assistance dogs for handicapped owners? They seem like good doggie citizens to me. 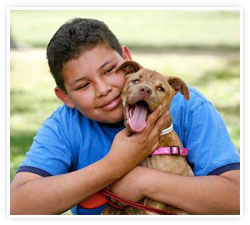 What we need is to find ways to deal with the real issue, which is to bring the "criminals" who are training these dogs to be dangerous, to justice, or taking dogs away from abusive or neglectful owners, which leads to the animal's poor behavior. Those who truly wind up suffering from BSL are the innocent dogs, who are euthanized or separated from their loving families, and the upstanding owners, who have registered their pets and trained them to be good canine citizens.

The bottom line is that every dog is unique with its own personality (kind of like humans) and should be judged based on its temperament and not its breed. Okay, I'll get off my soapbox now and go hug my dog. My gentle soul has a little Chow Chow in him. Should I be worried?

Co-founder of “I’m Tired of…” campaign