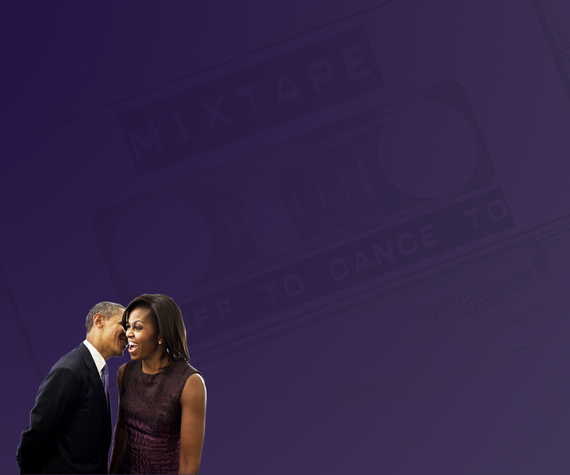 As is annual tradition, Barack Hussein Obama II (I still maintain that any numerical after your name is infinitely more authoritative than a Jr. and hence forth want to be known as Serge Leshchuk II) dropped his Summer Playlist. As is also annual tradition, he broke it down into a cheerful, "let's get work done" daytime section and an equally cheerful "let's get another kind of work done" (UGH) nighttime section. I listened to it, and I didn't throw up. I need a medal. But since breaking down summer playlists is a thing , let's break it down.

FOH. And I like Wale. But A. this is a presidential playlist and is no place for any kind of B-Grade artist is unacceptable. B. If you're going to pick Wale based purely of the value of him being a DC citizen you either need to dig into A Mixtape About Nothing or just don't.

Barry is on a full on summer victory/fuck you tour and I respect it ever so greatly. He could have went with Better Man and completely dehydrated the remainder of Trump-Camp (not a place you should ever send your child for any amount of time under any circumstances), but he took the higher ground. Smooth.

I almost forgot that this song was a thing until I saw it on this playlist. I didn't much enjoy to be reminded of it. Totally cool if it was a 2011 hatchback commercial. This is Summer 16 though Barry. Get with it.

Sara Bareilles -- Many the Miles

I didn't know who Sara Bareilles was until I read this. I listened to the song five times to give it due diligence, but the appropriate reaction remains a "solid no." If you're looking for a good intro song to your 90s feel good sitcom about a mother and a daughter trying to get through the perils of being middle class white in mid-size town suburbia, this is your thing. But this is a presidential playlist. We deserve better.

She's still the female Andre 3000 in my books, except she's actually making music. The only knock I can think of is that this is neither the Big Boi version (vastly superior because... Big Boi) nor is it the B.o.B. and Lupe Fiasco version (mildly superior version).

Here we go Barry, we're on to something. I love that this song still has life, I love that there are remixes, I like that it mixes perfectly (DJ Tip) with the Houston Chopped version of Leon Bridges' Better Man. You are Mr. Potus. You are.

Who picks a Jay Z song off The Blueprint III. THREE. The third Blueprint!!! There are at least like 2 predecessors that are better. Also, after you completed two presidency terms it's time to substitute ambition for flat-out bravado. Go with N***a Please.

Many Chao -- Me Gustas Tu

Dude, do Electric Circus (literally anything off it). If not you can go for Soul By The Pound. Finally if none of those cut it you can at least pick Be. Liking Common past his unification with Kanye West is played out. Liking Electric Circus Common is timeless. I do respect the ability to send the message.

Any song featured in a Beats commercial should automatically be removed by referring decision from any list. On the one hand, it had Kevin Garnett in it (plus). On the other, Colin Kaepernick (gross, definitely a minus). May I suggest a better alternative if you want Aloe Blacc on your playlist (you also get Nas, which is always a bonus).

See, Barry likes Nas. You could have had a Nas double header. Also, it feels weird to display an acute cultural sensitivity and include Many Chao but then dilute anything and everything out of reggae by adding this.

Look, Nina Simone on any playlist is a spectacular display of everything. She's perfect. She's a top 5 human of all time in my world and I will issue a warrant for you catching these hands when you argue otherwise. However, 12 absolutely electrifying minutes of Sinnerman may be too much for everyone. Hit them with Feeling Good instead.

Prince -- U Got The Look

You got me on this one. Upbeat sensation for your summer blues selection. Personally, I prefer my blues slow, down in the mud and downright begging to pour another glass of bourbon. However, this is a perfect addition to the "Barack Obama Fuck You Tour of 2016" and it fits right in there with the rest this playlist.

Once again, one of those tracks I actually had to go in and take a few listens to. This is what grunge fans point to when they put their nose an inch high and proudly declare that "real grunge is dead." Coincidentally, same can be said for blues fans. I actually like it though. Summer has been good.

Welcome evening. Welcome Nighttime playlist. Welcome everything. If someone asks you stupid shit like "why do you like Jazz" feel free to play this for them, but also slap them upside the head. Repeatedly.

Chrisette Michelle -- If I had My Way

Right around when the first note hits is when you come to a very uncofortable suspicion that you're listening to the Presidential Sex-Music Playlist. Right around the first vocal is when that suspicion gives way to a full blown realization. Buckle up people.

Such a perfect "let me pour an expensive alcoholic beverage of your choice and light these candles, no don't worry about why I'm wearing an all silk bathrobe" tune.

Classic. I feel like this is what Grace was inspired by when she did that super infamous trash version for Suicide "trying to hard to be Guardians of the Galaxy" Squad Soundtrack. Much better though.

Slow it down Barry.

Throw it back. Throw it all the way back. Most of us probably haven't even heard of this song unless your idea of an ideal Saturday afternoon is diving for vinyl with your paramour. This is a knockout throwback.

This was solely included just to mislead us from the fact that we are listening to the presidential boogie down track listing. But it's also D'Angelo, and D'Angelo is perfect in a way that chocolate milk is perfect.

Tower of Power -- So Very Hard To Go

A presidential goodbye. Also a very slick innuendo. I am not sure which side to rank here so I will do the first just for the sake of everyone's imagination. We'll miss you too Barry. Are we sure there isn't anything about that third term?

I don't even have a clue. Ella did it better (only point knock).

You lost me Barry, mostly by hitting way too close to home on all of this debilitating longing and loneliness.

This is roughly where the playlist even stops trying to pretends not to be what it is and just dives right into it.

Best hip-hop love/sex song ever. It is perfect. It is beyond perfect. If humanity was down to 30 people and they had to get in the mood to repopulate the Earth we should just have this song on loop. At all times.

The song opens with "I've been a bad bad girl." At some point a certain amount of assurance creeps in that this isn't just a Barack Obama Playlist. This is a "Barack + Michelle = 4ever" carved into a tree on a particularly sunset-y day playlist. This is the "we're the presidential couple, hear our boots knock playlist."

I love Chance. Like, I really love Chance. I love Chance to the point that he's more important to me than a majority of my family members and he joins an exclusive list of people I'd take a bullet for (Joe Biden, Kobe Bryant, Dwayne the Rock Johnson, Chance the Rapper and I'd take a very hard knife between the ribs for Shea Serrano). I love that Barack wants to give his Chicago roots (speaking of, where are the Roots?!) due credit. But, you need to up the ante, read the room, smell the roses and the candle scent in the air Barry. Hit her with Juke Jam or at the very least Same Drugs.

I love Miles across the board, but this feels like an introductory pick, like when your dad sets you down to impart some musical wisdom and give you his cassettes, this will be in there along with Led Zeppelin II. You have to go edgier after 2 terms in office.

Anthony Hamilton -- Do You Feel Me

We have arrived. Clothes are suggested but not required. Discomfort is growing and we are firmly into the white house bedroom territory.

Janet Jackson -- I Get Lonely

Anything off the Velvet Rope is basically getting down music. It's the intercourse soundtrack intercourse didn't know it needed until it came out. You can put that album on shuffle and it will still be perfect for it was destined to do. I am very uncomfortable with the mental imagery at this point.

Umm. Ya'll want us to leave?