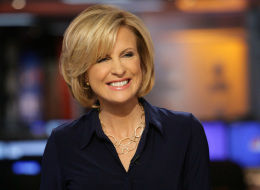 I was fired at the pinnacle of my career, on my 39th birthday. And in the year that followed, I learned that there are many psychological phases of being "let go."

By 38, I had a shiny new contract as the anchor of the Sunday evening broadcast; a correspondent spot on 60 Minutes Wednesday; and the possibility of co-hosting the CBS Evening News. It was great fun, and a huge steroid injection to the ego. My two girls were especially proud.

After all those years of hard work and dedication, it all ended in a flash. With Dan Rather's departure came the elimination of managers above him -- the very same managers who hired me.

It wasn't long afterward that I was negotiating my very public and very painful exit from CBS. To my kids I acted like I was giving them a gift. Somehow, I felt it was my duty to protect them from the pain I was feeling. I sugarcoated the whole thing. Big mistake.

I fed them a speech explaining how great this would be for all of us and quickly moved on, thinking I had done the right thing as a protective mother. The next day, the school called: Eight-year-old Carlie was upset, and the teacher asked if I could come in. Could I come in? Of course, this was the new me!

I found Carlie outside of her classroom in the fetal position; her teacher crouched over with her hand on Carlie's shoulder. My child was clearly upset; the teacher looked uncomfortable and said in a low voice, "Carlie tells me you're leaving your job, and she's very upset." I turned to Carlie and said, "That's a good thing, right? It's a good thing because we'll get time together. No more rushing. No more missing your events. No more job!" She pulled her head up, and, with two big blue eyes pooling with tears, said, "But Mommy, you love it so much! I don't want you to have to leave your job"

That moment was the first time I truly cried about what had happened to me, to us. I realized it would be OK to mourn together, to be angry together, to be discouraged together, and to be honest with each other. From that moment on, I sugarcoated nothing. They needed to be part of the process, whether I was up or down. It was a humbling yet enriching experience for all of us.

A fundamental lesson on being fired: Never lie about it. People will know what you're saying is a cover-up for how you really feel -- embarrassed, discouraged, and afraid. It's best to simply be true to those feelings and work form them. Kids are a great place to start with that. They too, will face challenges in life, and job loss is an opportunity to show them what you are made of.