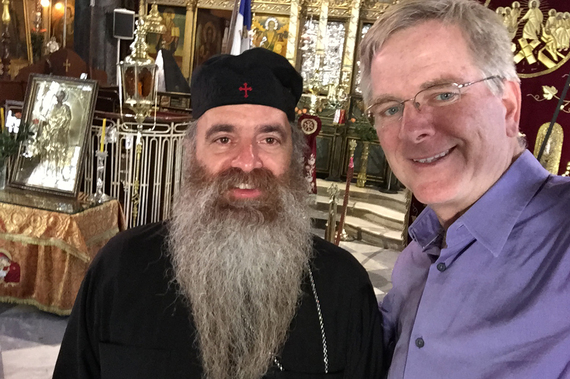 Our Easter special for public television is in the can. We finished shooting on Eastern Orthodox Easter -- which was this past Sunday -- in Nafplio, Greece.

For our filming, we were blessed to find the friendliest Greek Orthodox priest, Father Dionysis, running the town's amazing little Church of Panagia (Mary Above All Saints). Our first day was spent scouting, making connections, and getting the religious rituals sorted out.

A fun part of my work is to give another culture meaning so it becomes less foreign to an American visitor. Without a little context, Greek Orthodox ritual, music, and worship can look like ZZ Top at a séance. But, as with most things, once you understand it, you can see the beauty in it.

I think Eastern Orthodox Christianity seems foreign to many Western sensibilities because we in the West strive to be more cerebral. In the East, people allow the brain to take a back seat to the soul, heart, and emotions. Father Dionysis explained that Orthodoxy is not an ideology, but a feeling. He told me, "You look at the sky with eyes of the earth. An Orthodox Christian looks at the earth with eyes of the sky."

As we left, he bid us goodbye saying (in his tiny English), "Forever happy." 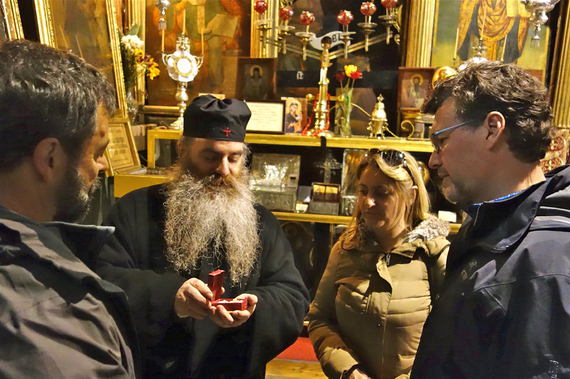 Some Orthodox Christians refer to non-Orthodox as "those who have yet to enjoy the incense." Father Dionysis explained that every aroma comes with its own philosophy. Sorting through his various incense powders, he explained that during the service on Holy Saturday (after the Crucifixion but before the Resurrection), a change in the aroma would user in the transition from Crucifixion sorrow to Resurrection joy. After all, worship is for all the senses. The entire body participates. 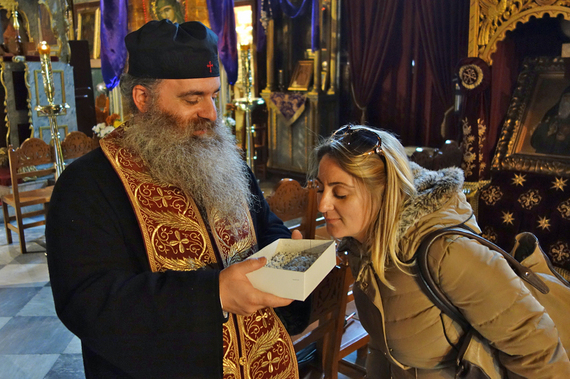 Trying to illustrate how each aroma elicits a distinct emotional impact, Father Dionysis asked us to inhale one that was "the Passion and the Resurrection." In this shot, our local guide, Patty, gets a whiff of something smoky -- "of fire, symbolizing the heart in flames so the prayer has a special warmth."