It was 85 years ago today that Annie Moore, the first immigrant through Ellis Island, died. I can state this with certainty because history was corrected three years ago. Until then, a native-born American had been passing for Annie. How did this happen? We were careless with our history.

Annie Moore arrived from Ireland on January 1, 1892, and as the first to alight at the newly opened immigration station, she was greeted with much fanfare and made headlines in all the newspapers of the day. Then we promptly forgot her - that is, until the restoration of this national landmark got under way almost a century after her arrival. A symbol of both American immigration and the Irish diaspora, she resurfaced in statue form at Ellis Island and the Cobh Heritage Centre in Cork. 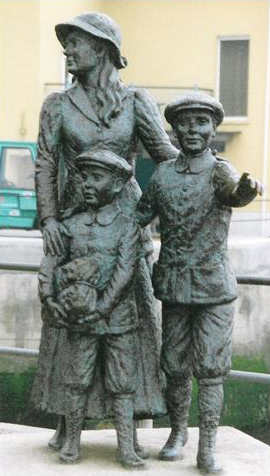 Her proud descendants naturally claimed her, so her post-Ellis story and photo found its way into books, museums and documentaries. Annie had finally recovered her little piece of history. There was just one problem with this happy ending: we had the wrong Annie.

Family lore tends to be accepted at face value and the family in question had fallen prey to an elderly relative's wishful thinking. Due to her stories, they thought they were related to Ellis Island Annie, but they were actually descended from another woman of the same name who was born in Illinois. What's strange about this is that no one bothered to check, so the wrong Annie's story was allowed to seep into the cracks of history.

Fast forward to 2002. I discovered the discrepancy while working on a PBS documentary about immigration and informed the parties I assumed would be interested. Four years passed and the wrong Annie's tale continued to circulate. Visiting the American National Tree exhibit at the National Constitution Center in Philadelphia in 2006, I spotted a photo of the impostor and decided that something had to be done. True, she had only accidentally usurped Annie's place, but still, the real Annie deserved to have her story known.

Recognizing that I was dealing with a needle in a haystack situation, I enlisted the help of my fellow genealogists by blogging a contest offering $1,000 for the first proof of the real Annie. Just six weeks later, my husband and I found ourselves standing at the site of her unmarked grave. After tracking down her descendants, I organized a family reunion in New York, and thanks to Sam Roberts, Annie's true story was shared with the world on the front page of the New York Times.

So now we have Annie's story right. Well, mostly.

The newspapers that covered her arrival all remarked on the coincidence of it being her 15th birthday, and even today, this "fact" is widely reported. But thanks to the efforts of Tim McCoy's 11-year-old students from Scoil Oilibhéir in Cork, we now know that Annie was born in May and was really 17 years old. While making a film about her, they found her birth and baptismal records. In all likelihood, some officials involved in the 1892 opening of Ellis Island realized the potential P.R. value of the first arrival being a charming birthday girl, and it took 21st century Irish schoolchildren to correct their fiction!

The fact that these young sleuths found this out gives me hope. Annie's age on arrival may seem a minor point, but as a professional genealogist, I'm constantly reminded how much of our history is either left to be discovered or simply wrong. But I find it heartening that it's so much harder to hide even long-buried truths in this digital, connected and genetic age, and look forward to many future corrections. And for the record, Annie Moore died on December 6, 1924 at the age of 50. R.I.P., Annie.

A Real Zoodunit: Monkeys Found But Mystery Deepens In Dallas

Family Of Tyre Nichols Prepares To Lay Him To Rest