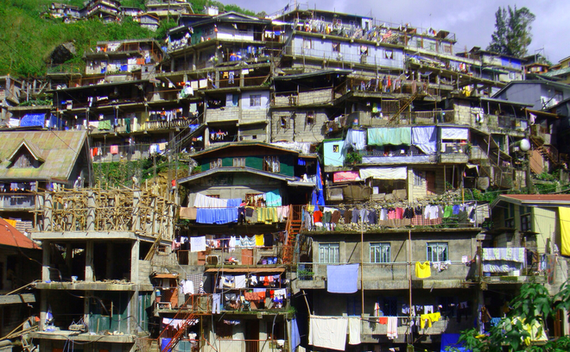 There was a time when we worried about a "population explosion," with ever more people fighting over ever fewer resources. Yet, the population growth has decreased since the late 1960s and resources have not run out.

There are still population problems, but the two main ones are likely different from what you think.

The UN expects 2.4 billion more people by 2050. But contrary to common knowledge, this is not mostly about couples having lots of babies. Remember, the average woman in the developing world had 5.4 children in the early 1970s, but today that number has dropped to half at 2.7.

Even if every man and woman just had one baby survive, world population would still increase by 1.9 billion by 2050. More children only explain half a billion of the population increase. That we live longer explains another 0.4 billion. But the most important factor - 1.5 billion more by 2050 - is simply because we're still a young world, where many youngsters are still to have their own family.

This doesn't mean the half-billion is unimportant. If families have fewer children, they can invest more in their future, giving them much greater earning potential. As countries get more prosperous, their birth rates fall. Mothers have fewer children who are better-educated and themselves have small families.

Increasing prosperity is shared among fewer people. This is what first happened in the Old World during the Industrial Revolution, and the living standards of Europeans rose rapidly. More recently, a number of East Asian countries have gone through a similar transition, none more so than China. The good news is that it could work anywhere, also allowing African countries catching up fast.

The Chinese government slowed the growth of its population by imposing a 'one-child per family' rule. This may have been good economically, but was also an infringement of human rights. Fortunately, there are other, less drastic, ways to travel this road, particularly by making modern contraception available to everyone who wants it.

Population is just one key issue on the agenda for the international community at the moment. The problem is that, although everyone agrees that we should be doing everything we can to make poor people's lives better, prioritizing a particular set of targets is difficult. Governments and NGOs have been working together to agree how best to improve people's lives in the period to 2030, but there are still literally hundreds of possible targets, all of them stoutly defended by someone.

Having hundreds of priorities is like having none at all. That is why my think tank, the Copenhagen Consensus, is trying to help focus on the most effective targets, using the tools of economic analysis. Although economics doesn't provide the entire picture, understanding where we do most good is at least a very good starting point.

Groups of top economists are looking at each of nineteen possible issues and making their recommendations. On the population issue, Hans-Peter Kohler and Jere Behrman from the University of Pennsylvania argue that making modern contraception freely available is a phenomenally good investment. Providing contraception to the 215 million women that today want to avoid pregnancy but can't, would cost about $3.6 billion. It would annually result in 640,000 fewer newborn deaths, 150,000 fewer maternal deaths and 600,000 fewer children who lose their mother. Estimating this misery in economic terms may seem cold, but it makes it possible to compare contraception to other big challenges. In total, contraception would avoid about $145 billion in human misery. That alone means that every dollar spent will do $40 good.

But experts also estimate that with fewer kids, the parents can afford better schooling, while society benefits from fewer costs from kids and more income from a larger working population. Those benefits total $288 billion per year, making a dollar spent on contraception do $120 worth of good.

But population also means growth in older people and possibly shrinking populations. This is already happening in Europe and Japan, but will also start soon in China and eventually most places. Today, 12% of the world's population is above 60 years, but in 36 years time, that will almost double to 21%.

Although aging may seem a less pressing problem than global population growth, it is real and has to be tackled. Policies aimed at increasing the birth rate in Europe and elsewhere have not been successful, but there is a better solution: allow more migration. Properly managed, this can benefit the receiving nation (getting more workers), the migrants (getting better pay) and the sending country (getting remittances). In total, it turns out that the benefits are more than forty times the cost.

There are other promising targets, which are more difficult to cost - discouraging early retirement and dependency, for example. But overall, the economists make a powerful argument for why contraception and migration should be prioritized on the list of global targets.