I've explained that a new House rule will make it harder to reapportion payroll taxes between Social Security's retirement and Disability Insurance (DI) trust funds to avert a one-fifth cut in benefits to severely impaired DI recipients in late 2016. In a revealing statement, co-sponsor Representative Tom Reed (R-NY) says the change is designed to prevent Congress from "raiding Social Security to bail out a failing federal program." He's doubly wrong.

First, far from "failing," DI has grown mostly in response to well-understood demographic and program factors like the aging of the baby boom, and the program's trustees have long anticipated the need to replenish the trust fund next year, as I noted yesterday. Second, DI isn't distinct from Social Security; it's an essential part of Social Security. 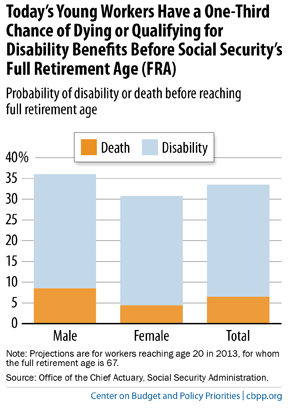 Social Security is much more than a retirement program. It pays modest but guaranteed benefits when someone with a steady work history dies, retires, or becomes severely disabled. A young person starting a career today has a one-third chance of dying or qualifying for DI before reaching Social Security's full retirement age (see graph, excerpted from our DI chart book).

Though they might not even know it, more than 150 million workers have earned DI protection through their payroll tax contributions in case they suffer a severe, long-lasting medical impairment. Nearly 9 million of them, mostly in their 50s and 60s, receive disabled-worker benefits from DI. In fact, most DI recipients are close to or past Social Security's early-retirement age of 62.

Statements like Representative Reed's implicitly attempt to pit Social Security retirement and disability beneficiaries against each other. It'd be far better to do a straightforward reallocation of payroll taxes -- a noncontroversial step that Congress has taken 11 times to shore up whichever trust fund needed it -- while crafting a sensible plan to restore overall solvency to this popular and vital program.