Recently, a friend of mine asked me how old her child should be before she starts working on job readiness.

Now. Right now. Do not pass GO. Take the time to stop on every single solitary square on the board, building the skills necessary for employment and an independent life so your child can collect his $200 on Game Day.

For any young teen to ask about a job is amazing. For my son Liam, who has autism, it was cause for a giant celebration.

When he was first diagnosed, communication, following directions and eventually gaining employment seemed so far away from our daily reality, but working step-by-step, and one small goal at a time, we were getting there.

At home, Liam's first goal was to learn how to sit in a chair until someone counted to five. Nine months later, he did it. One of his first goals at school was"Liam will be able to stack three blocks in order for every four out of five attempts." I remember thinking, "This is so stupid. I want him to talk. Set a goal to get him to talk."

But everything you learn is a building block for the next, and learning to communicate through listening, then following directions, eventually drew out his words.

On the way to school five years ago, my son pointed and said, "I want to get a job at that McDonald's when I turn 16."

This particular McDonald's is historically significant to our family. We have spent an inordinate amount of time there -- most of which included extended periods of basically loitering.

We visited this McDonald's PlayPlace three times a week after he was diagnosed. Back then, our insurance limited our access to treatment and therapy. So, I built on his Sensory Occupational Therapists's work by making him run through tunnels for a sip of soda. I made him say "WHEEEEE" when he slid down the slide like his Speech Therapist did to get a French fry. Then I got him to jump in the ball pit and interact with other children for the grand prize -- a Happy Meal toy.

Our house was drowning in both Happy Meal toys and frustration but eventually, everyone's work began paying off and words started coming back.

Sitting in his chair, once he mastered stacking three, then four then give blocks in a row, he moved on to goals at school like "Given instruction, Liam will give objects on command in three out of four opportunities with six variables in a nine-week span." Or "Given the opportunity, Liam will use a transition object/icon to walk from arrival areas with hand held by an adult to classroom to begin the school day without resistance or darting in four out of four attempts."

Every goal met, every single time, no matter how tiny, whether at home or at school, was a step in the right direction.

With his new announcement, though, I wondered if three years be enough time to teach him what he would need to know to be both job-ready and safe with teenage managers who weren't trained in autism supervising him.

We needed a plan. So, our team pulled out a piece of paper and thought of all the little goals he would need to master to obtain his big goal by his deadline.

At the end of three years, his team spent over 1,500 hours working on job skills. We photocopied 200 applications so he could practice completing them independently. I drove to McDonald's on hot summer days and made him smell the dumpster trash in all its sour milk glory until he could do it without gagging. We visited 29 area McDonald's seeking fake interviews so he would ace an interview at the exact restaurant. I called our local McDonald's District Office for two months straight until I found out what assistance was available for people with exceptionalities.

The day before his 16th birthday, I had one more thing on my list to do. I stopped at that McDonald's to explain all of the effort to prepare him for employment and asked the manager... for a chance.

And Shana Green gave him one. Two years later? He's still lovin' it! 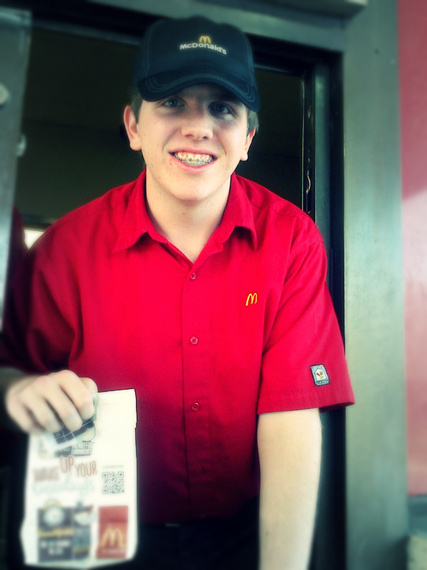