Learning to escape and stay in your big, beautiful life

I snapped the buckle into place and turned to watch baggage handlers toss suitcases unceremoniously in the cargo hold. The gnawing in my gut had risen to a slow burn in my throat. What was I thinking, leaving my family for this silly, selfish trip to a women's conference in Cancun? Arriving in a foreign country at midnight by myself, hoping to catch the last ferry to Isla Mujeres and then find my way to a hotel. By myself.

So much I didn't know, so much I couldn't control, so much that scared me.

I had arrived at the airport in plenty of time but just before boarding I was told the flight had been oversold. I was offered a flight 9 hours later and instructed to leave airport security and make my way through customs all over again. Three hours later, I found my way to the lounge -- and promptly began worrying.

You see, Isla Mujeres isn't easy to get to. My flight would land (if on time) at 10 p.m. The last ferry to the island leaves Cancun at 11. I had exactly one hour to get to the ferry or be stuck in Cancun for the night without a hotel.

I couldn't reach the conference organizer because a tropical storm that day knocked out power -- and cell service -- to the island. I was a woman traveling alone to a strange country -- yes, Mexico is a strange country -- where I didn't speak the language, late at night, with no clear plan for how I would get to my hotel that night.

As the plane took off, I regretted my decision to travel, even though I'm no stranger to traveling solo -- nor am I in a minority. According to a study released last month from Booking.com, more than 75 percent of Canadian women have embraced traveling alone, tying with Australia for the top spot globally. I was alone on this plane but I wasn't really alone -- time to put the big girl panties on and just go for it.

When I landed, there was a lot of negotiating and worrying and saying thank you in multiple languages but I arrived at my new home for the weekend -- one o'clock in the morning. Safe. Maybe the women Booking.com interviewed were onto something...

The next morning, I woke at dawn, shaking off the nerve-wracking unpredictability of my travels to take in the sunrise before heading to the conference, We Move Forward (WMF), a conference for women, by women on International Women's Day on Isla Mujueres, the Island of Women.

I was attending WMF as their social media liaison and was intrigued by the event. For three days women would gather, listening to speakers and getting to know each other. But it didn't promise anything solid in return and I couldn't get a handle on the attendees. No defined group of attributes, no skill development... Who were these women?

I met women who worked outside the home, women who'd climbed the corporate ladder, women who'd struggled from job to job their whole lives, women just starting out and women already finished with their careers. And as I got to know these women, I started to see what drew them together.

Fear. They, we, were all afraid. Of something...

Some were openly worried and scared. Some hid their fear, revealing it a little a time. Some gave their best but always ended up a little shy of what was needed. Some of the confident women denied their fear outright but you could see it in their eyes, in the hesitation of their questions.

And that fear defined them, defined me.

But there was something else too. Courage and strength and hunger, a need to get past the fear. And unlike other conferences where I've been told to be fearless or to deny my fear, this one allowed me to acknowledge my fear, to get to know it better, to embrace it.

What I learned is simple

Recognizing my fear gives me power. When I boarded that plane, I buckled fear into the seat with me, invited it along for the journey. I wasn't fearless or escaping fear but instead using it to find my power. When I was younger, I used a journal hidden in the cupboard behind the toilet paper as my power. That small, cramped bathroom gifted me with space to write my deepest fears and turn them into stories. It was my conduit to being published in a Chicken Soup for Soul book and the hundreds of other publications I've contributed to since then.

My journal was first my getaway plane, overflowing with baggage that weighed me down and terrified me. But when I unpacked that baggage and shared it with others, I discovered that my baggage isn't all that different than everyone else's. And sharing it with new faces that hadn't seen it all before taught me how to transform fear into fuel.

Remember that study from Booking.com? It also said that 62 percent of Canadian women travel solo simply for a brief respite from their everyday lives, a chance to escape to somewhere different for a short time. Seems like I'm living my life in the middle of a trend, an empowering one.

My getaway plane can be a journal entry that turns into a published piece or a trip to a strange country at midnight. But the result is always the same. In those moments when I'm most afraid, I learn something new about myself.

Maybe we all need a getaway plane to escape our own mediocrity. If you ask me, that's worth the price a plane ticket -- anywhere. 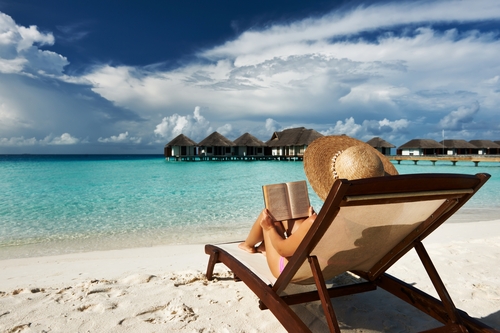