The Tribeca Film Institute - TFI as it's known is the year-round organization that drives the Tribeca Film Festival. Five years ago they launched TFI Interactive - a day long event aimed to explore the cutting edge of filmmaking, storytelling, and technology.

This year's hands-on space was called The Interactive Playground - and walking through the huge, dark, and at times cacophonous space proved to be an appropriate analogy for the state of Virtual Reality for both creators and consumers today.

There were 18 projects featured - as best as I could count - some of them with long lines and anxious wait lists, others wit project creators with their Vive headgear awaiting willing explorers.

I dove in, and experienced four of the projects - with some unexpected surprises along the way. 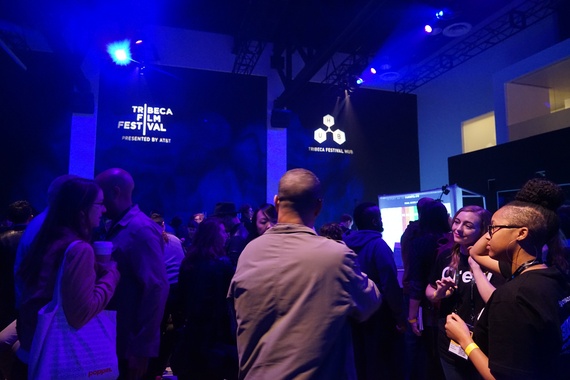 My first VR exploration was called Deep Dream. I was promised by a fellow guest who'd just tried it that it was like virtual LSD. Ok, that seemed worth exploring. The creators worked with VR at Google and the Artists and Machine Intelligence program - and created a series of images "generated in large part by artificial neural networks" and "output from the DeepDream algorithm and word.camera."

Not a great first stop for me - just a bunch of weird blurry images and sound. To random and without any narrative or story. Ok, so the first stop on my VR journey was a bust. Moving on.

Next - to the most imposing elements of the room. Two glistening aluminum mortuary freezer chests. You couldn't help but feel - almost immediately - that they were straight out of a coroner's freezer for human remains. And, you'd be right. Ok, that's creepy. Lead Designer Marcel van Brakel explained that the idea was the explore 'virtual reality' in a way that would help your mind create pictures, rather than produce them for you. "With smell, we used imagery already present in the brain to tell a complete story" said van Brakel.

The project, called Famous Deaths, recreates the final moments in the lives of famous people. At Tribeca - one freezer was labeled J.F.K., and the other Whitney Houston. Using details from the story and photos from the crime scene from the dinner Whitney Houston had the night she died to the used meth pipe near her bathtub. van Brakel and his team recreated everything through smell. Yes, smell. A specially made "smell printer" pumps 9 different smells for each story - as sounds envelop the user. 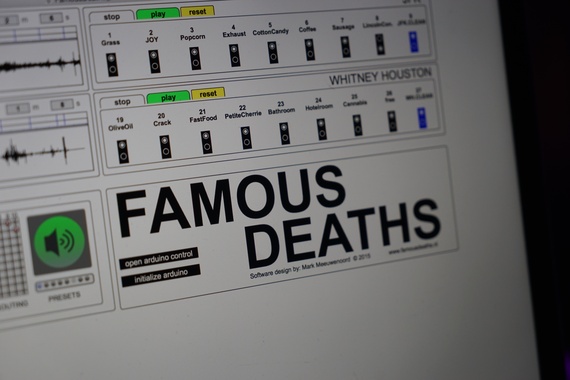 In complete isolation users are immersed in a 4-minute documentary soundscape and its complementary sequence of smells. "Some people thought their hair was on fire when we exposed them to the smell of meth," van Brakel explained.

Full disclosure, - I considered it but decided instead that the looks on peoples faces when they came out was enough to scare me away. I would say they varied from bemused to freaked out.

New: I went back. I decided I had to try it. Here the quick take. Rolling into what feels like a coroner's freezer is kinda creepy. At van Brakel's advice, I did Whitney Houston. The sounds and the smells are very evocative... and the lack of visuals is effective. The experience was intense and memorable... and I recommend it. VR in sound and smell is powerful stuff.

So credit to TFI for bringing smellavision to the festival, but maybe if the stories weren't so dark I would have given it a sniff. Onward. 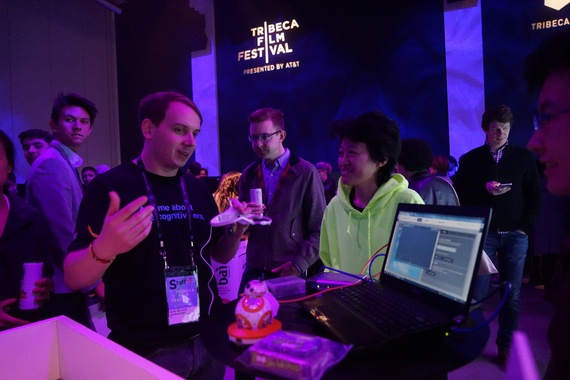 Next, for a palette cleanser - a fun, silly, journey into a world of big colorful adventure. The project called PLAYTHINGS was the most popular VR experience on the floor. it was a music playground set on an island filled with cheeseburger drums and other junk-food instruments that you can really play with your own two hands. The Vive headset and two hand controllers gave uses the feeling that they were inside the technicolor world. Candy attacked you in a musical game - and the Golden Tongs allow you to make instruments. The Floating Donut was my favorite. Full of fantasy and adventure - players literally jumped around with glee inside this silly but fun adventure world.

Walk through a glassy ripple in space-time, and you might find yourself on the surface of a two-story iridescent barbecue grill. Turn a whole room into a rhythm game where you fend off a musical onslaught of candy. Use the Golden Tongs to rearrange the world around you and make any instrument you can imagine. Creators George Michael Brower made a frothy fun VR treat - junk food without the calories.

Finally - looking for an experience that brought documentary film to VR, I found my way to "Injustice".

Injustice is a documentary that you experience through the eyes of one of the characters in the film. The protagonist speaks to you - and your answers direct how the story proceeds. But it's hardly a lighthearted film, the film is themed around racially motivated police brutality.

As a witness to an act of racial discrimination in front of you, I was forced to make moral and ethical decisions in real time.

Injustice was - for me - the most important thing I saw. It allowed me to shift from being an observer to being involved in the story - to think about how both the police and the observers were behaving, and to think about my personal responsibility for allowing the scene to progress.

Director Jaehee Cho, Producer At it Kothari, and Programmer Zixu Ding should be very proud of this important work - it's a sign of things to come.

Overall the interactive Playground was a perfect snapshot of where VR is today. As creators test the boundaries of storytelling, technology, and the audience's willingness to go beyond passive audience observation.

TFI's five-year journey into the world of VR is still nascent, but that's true of where filmmakers and audience are as well. I'm excited to see the journey continue.