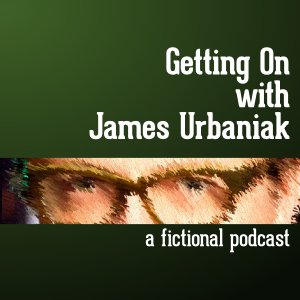 Once upon a time, an inappropriate comment was a thing that invited scornful looks from the various relatives, sorority sisters, or church parishioners who were within earshot. Today, it is often a matter of international attention. A tweet, a joke in a comedy club, an ill-thought Pinterest pin all have the power to incite anger, reprimands and even revenge.

In short, no tree in any forest will ever fall again and not be criticized.

The solution to such tempests in very large teacups is the artful non-apology apology: "I'm sorry you feel that way," "I apologize for your misunderstanding me," "I sometimes forget that my words are powerful and they can hurt those who are not prepared to hear them," and the like.

Actor James Urbaniak, the voice of Dr. Venture and our new favorite entry into the world of podcasting, has just released a meditation on this very phenomenon of social networking. His podcast, Getting On With James Urbaniak, presents a new monologue each month by fictional versions of himself (contradictions abound) written by various authors. In Episode 2: A Public Apology, written by Brie Williams, Urbaniak attempts to make amends for a certain "remark" he made following a tragedy in Montauk.

Listen to Episode 2 below, and subscribe to the podcast on iTunes.

Getting On With James Urbaniak, Episode 2: A Public Apology