It's been over two months now since I've uploaded a blog for The Huffington Post. While I'd like to be able to explain that my absence was due to a pressing engagement that required my invaluable presence on a world wide trek in search of miracles both great and small -- I can only tell you the truth. There is only one reason I have shirked my glorious duties.

It is because of Hannibal, the television series.

Yes, I do realize that a TV show only plays once a week and that in itself shouldn't render one incapable of doing the chores that keep one alive and well during the times when the show is not actually playing, however, that was not the case for me. Hannibal, or more specifically Season 2 of Hannibal, was so insidious in its takeover of my mind that I am surprised I was able to feed myself. Though sleep -- when it did finally arrive -- became basically a psychic wasteland for Hannibalistic nightmares of which so many were disturbingly sexual (thank you!).

From the beginning I've said that Hannibal is a private and unique experience, which is completely up for interpretation by whomever is watching it. As it became more and more obvious that an experience was in the process of being mutually endured, a mass formed that included many, many people who, upon congregating, called themselves fans -- or 'fannibals.' The fandom grew and grew and as each new episode came in to simultaneously destroy and inspire the minds of those open to the experience, the individuals cried out as one, bemoaned the destinies of lead players in unison and whatever was left of the individual mind had morphed into an entity: the fandom.

As enormously creative and ironically hilarious as the fandom could be, I personally started to feel like my rights as an individual lover of this psychosexual horror masterpiece were being revoked; and after the season finale, all bets were off. I needed to explore my personal conception of the gut-wrenching finale -- I couldn't just work it out like a group therapy session where everyone comes up with an answer that's one size fits all. And so, I withdrew, became internal. My understanding would come in the same way that much of the television series was written -- through metamorphosis. Unable to deal with the ending due to so many variables that hurt so much deeper than I could ever imagine, I cocooned. I needed the safety of a small, soft opinion-free environment to heal in. I could hear the echoing whispers of a fandom gone insane, but I could not hear the words, nor did I want to hear the words. I only wanted to heal and to hopefully break through the chrysalis and come forth a butterfly, filled with new meaning.

So in love with this show was I that I refused the ending and created my own as a survival mechanism. I created a new meaning: hope. No alternative storyline, no fan fiction. Just hope.

I'm not here right now to give a review or to talk about plot lines or characters. I'm not here to opine, or to praise or condemn the opinions of others. I'm here because I can finally breathe again, that the few weeks (11 days, actually, but really -- who's counting?) that have passed since the season's end have allowed me the fresh outlook I've so desperately needed. This masterpiece of television with its brilliant cast of monsters and maniacs stopped my heart and made sure I could not move until every fantasy scenario was either rebuilt in my mind or abolished altogether. Hannibal was a crossing, a bridge in my life that would not grant me passage to the other side unless I confronted it. This piece of fiction, this superbly dark and vicious comedy -- it not only opened my eyes -- it brought me new life. Loving Hannibal is akin to being in love.

At last, much like Dante, after crossing the dark and foreboding River Styx, I have crossed to the other side where I too, am finally able to let my poetry flow free. And the only way I was able to release myself from the ties that bind me to pain of this mad, mad story of love, murder and cannibalism was by rewriting the season finale according to what fit best in my mind.

It's funny, the actual scripted plot has no place in my psyche anymore -- it's unusable to me, leaving me only in pain. What stuck with me were the visuals, not the intended meaning of the story behind them. We all took what we wanted from this feast -- I choose to leave the bones so that I may not choke on them in the future. Was anybody actually satisfied with this ending?

The ending gave us what we needed: a way to fantasize a continuation. It made cocoons out of all of us and gave all of us a pain-filled finale from which we would walk away, dazed. For me, there was no ending; there were just gorgeous faces covered in blood, faces that expressed more than anything I could take in one singular understanding. There may have been a story in there, a lesson to be learned from -- but all I saw was beauty. Love-glutted beauty. I saw a bloodied, horrific and disturbing beauty that hit hard on every human level of emotion, no matter how monstrously portrayed.

Because it moves us to feel and interpret, I call this show an artistic experience. Hannibal is art, and the Season 2 finale, which left the fans feeling emotionally gutted, was the result of what art does to you when you trust that it's safe.

The fiction and drama of Hannibal, like art, is a living thing -= an unpredictable thing with no guarantees. The only concrete idea that the season finale left us with is that it is only through interpretation and personal metamorphosis that we'll discover hope, new life, freedom and perhaps (and hopefully) -- a whole new world of bloody good fun, gobs of mind-boggling homosexual innuendo and beautiful maniacs doing beautifully maniacal things. 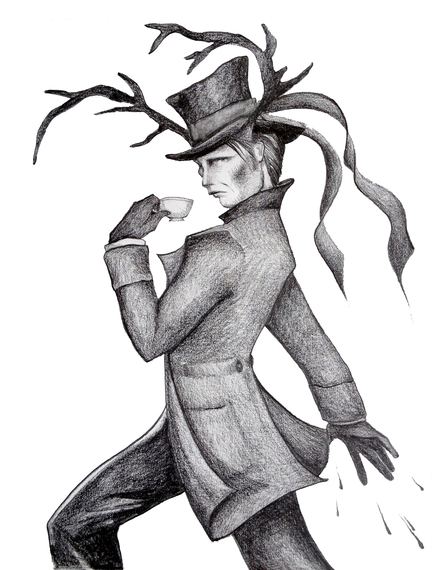