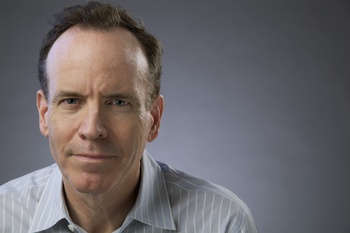 "This is the true story of seven strangers, picked to live in a house, work together and have their lives taped, to find out what happens when people stop being polite and start getting real. The Real World."

Over two decades later, The Real World, which is often credited to launching the reality TV craze, is back with its 29th season and its return to San Francisco, where it taped one its most-talked about seasons 20 years ago. This time around, though, there is an added twist. Titled Real World: Ex-Plosion, everything starts out seemingly normal -- housemates move in together and begin forming relationships. What they don't know is four weeks into their new lives they will get company -- their exes.

Over the years the show has navigated into uncharted territory. It's hard to forget the original San Francisco season where America met and fell in love with Pedro Zamora, one of the first openly gay men with AIDS portrayed on television. Throughout those episodes the audience watched Zamora not only struggle with the disease, but also fall in love. His commitment ceremony to boyfriend, Sean Sasser, who died last August at the age of 44, was a first for television. Zamora died just hours after the last episode of the third season aired. In 1998 his life was turned into a film written by Dustin Lance Black.

It's been journey, not only for the show, but also for its co-creator, Jonathan Murray. He and his partner, the late Mary-Ellis Bunim, had originally intended for The Real World to be a scripted series and used the working title St. Marks Place. When MTV realized it was out of their budget, Murray and Bunim went back to the drawing board and came up with the concept of using real people and filming them as life happened. MTV and television would never be the same.

Over the years, Murray, an openly gay man with a teenage son, has been a champion for LGBT rights. From Los Angeles he opened up about the new season of The Real World, Pedro Zamora and the shows imprint on pop culture.

Dustin Fitzharris: What made you decide to return to San Francisco?

Jonathan Murray: We've been wanting to go back for a while now. Twenty years later just seemed like the time to do it.

Fitzharris: Why did you decide to spice this season up by introducing the housemates' exes?

Fitzharris: Could you live with your ex?

Murray: Could I? Uh... My ex was so long ago I don't think it would be an issue. We've been good friends for quite a while, and we're on different coasts, so we're safely separated. For these young people their exes are much fresher. In one case we learned one of the people had just hooked up with his ex before he left his city.

Fitzharris: This season there is a gay couple -- Arielle and Ashley. What can you tell us about them?

Murray: They were interesting because Arielle lived in Oakland, so she's local and her ex is, too. So, very early in the season we're meeting Ashley as she's visiting Arielle.

Fitzharis: You have called them the hottest lesbian couple you have ever seen.

Murray: They are! They are both incredibly beautiful women and incredibly sexy.

Fitzharris: You are often referred to as "The Father of Reality TV." What do you say to critics who say reality shows aren't good programming and have ruined television?

Murray: I think reality takes us places where we've never been before. When we first started doing The Real World in 1992, I think television was pretty boring. We had a lot of procedural dramas and a lot of bad sitcoms. I think reality has made scripted television better. It forced them to do some more innovative things, like the show Lost. I think there are certain stories that are better told in a reality form. The Real World, a story about young people finding out who they are and making mistakes and having to live with those mistakes, is much more interesting than it would be in a scripted show. It's not some 40-year-old trying to write what a 20-year-old would be saying.

Fitzharris: After all these years and with people knowing that reality shows may be their ticket to fame, isn't it difficult to find individuals who are authentic and don't want to appear on television and create drama just for the sake of creating drama?

Murray: That's our job in casting. When we first started in a way it was much easier because people didn't have as much knowledge of these kinds of shows. Now we've changed our approach to casting. We look for the people rather than waiting for them to come to us. One of the first questions on our application is what other reality TV shows have you applied for? If it's someone who is just applying for reality TV shows, that's telling us that maybe they aren't quite right for us. We want someone who is genuinely excited about this Real World experience.

Fitzharris: Let's go back to 1994 and talk about Pedro Zamora. How did he get involved in the show?

Murray: We knew we were going to San Francisco, and we felt we wanted to do outreach to the gay and lesbian, and also, the HIV/AIDS community. We were primarily looking in San Francisco, but then we got a letter out of the blue from Pedro Zamora in Miami. He talked about coming from Cuba, his mother dying of cancer, his feelings toward being gay, going out and being taken advantage of by older guys when he was in high school, and becoming HIV-positive at 17 and having to figure out what he was going to do with his life at that point. It was quite a positive letter. I would've cast him even if he wasn't HIV-positive or gay. He just had so many interesting qualities. The letter also had several pictures, and he was such a handsome guy. It was very exciting to open up that letter. Little did I know that when I went to Miami to meet with him and others, on the way to the casting interview he was throwing up and was experiencing some of the challenges people at that time were faced with when they were HIV-positive or had AIDS.

Fitzharris: He was a lot sicker than he had let on to you and the other producers. Did you receive any push back from MTV about casting him?

Murray: Not at all. From the beginning this show was about diversity. MTV fully supported us in making the show as diverse as possible. The only thing they asked us to do once we put our cast together was make all the cast members aware that someone in the house was HIV-positive and tell them they should check with their doctors if they had any concerns.

Fitzharris: Did you have any concerns about Pedro participating in the show?

Murray: I was personally concerned about him being on the show because I know it's somewhat stressful being on a reality show. I actually sat down with him and talked about that. I told him he should think about that before he said yes. He said the show was important to him, and if he wanted extra stress in his life or possibly put his health in danger, it should be his decision. He also wanted to come to San Francisco and possibly have the chance to fall in love.

Fitzharris: Were you surprised at the instant success of The Real World?

Murray: I think everyone was surprised that people were tuning in. At the time we [Murray's production company, Bunim-Murray] had been around for about four years, and we had done a lot of pilots. It was very exciting to finally have something that was not only having some success, but also getting recognition. When the first season was coming to an end and we were talking to MTV about another season, we were afraid no one would accept us having a different cast. At that time in television you didn't change your cast or location. Maybe that is the reason why we have survived 29 seasons.

Fitzharris: And it sounds like this show is still your baby.

Murray: It's really important to me. If I look at my career, this show is probably always going to be in the first line of anything that's ever written about me.

Fitzharris: What are you the most proud of?

Murray: I think The Real World and the diversity of our cast. The inclusion of gay and lesbian people. I think it's made a difference in the way today's young people view diversity. We statistically see that young people are totally accepting of gay marriage. They have a different mind-set, and I'd like to think that The Real World was a part of that.