When a Moroccan fruit-seller closes his stand each evening at the Porta Palazzo market in Turin, Italy, he thinks about how much money he made that day, how much he can send to his family back in Morocco that week, how much it will cost to send that money, and how many Dirhams his family will receive.

This fruit-seller is one of the nearly 250 million international migrants who send money back home to family members. For many people in developing countries, their remittances from overseas are a reliable and steady source of income that help them make ends meet.

The amount of money migrants remit each year has been steadily rising over the last decade. International remittances totaled $583 billion in 2014; $436 billion of that amount went from developed to developing countries, according to the World Bank Group's estimates. 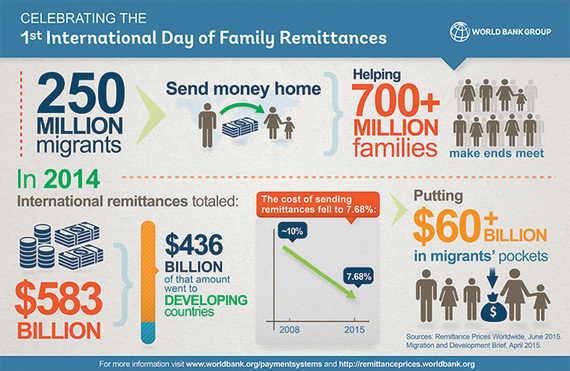 Correction, June 17: An earlier version of the infographic mistakenly had $523 billion instead of $583 billion.

When we started monitoring the cost of international remittance services in 2008, the transaction cost to send money accounted for more than 10 percent of the remitted amount. That fact meant that migrants spent $30 billion on charges to send the money, instead of having that money reach their families. That amount is equivalent to the official development assistance (ODA) given each year by the United States to developing countries.

In 2009, the G8 set a target, later adopted by the G20, to reduce the cost of international remittances from 10 percent to 5 percent within five years. The target was dubbed the "5x5 Objective."

Significant progress has been made and the cost of sending remittances has indeed fallen considerably since then. Today, the average global cost is 7.68 percent. According to our estimates, the cost reduction has saved migrants and their families more than $60 billion.

This drop in price has been achieved despite adverse conditions in the marketplace recently - such as the rising cost of compliance and banks' moving toward de-risking their operations, which curtails remittance service-providers' access to bank accounts.

The World Bank Group has been leading the global effort to reduce the cost of sending money home and to improve remittance markets through the Global Remittances Working Group, and has helped establish global standards and codify best practices. We've worked with governments to improve remittance markets in more than 30 countries. With local stakeholders, we've launched innovative projects, such as Project Greenback 2.0 on Remittances Champion Cities, to better understand how migrants use remittance services and to how to make them more efficient. Our Remittance Prices Worldwide database monitors the cost of sending remittances from 32 major sending countries to 89 recipient countries, analyzing a total of 227 country corridors.

We're committed to making the "5x5 Objective" happen and to continuing to work on reducing the global cost of remittance services to 5 percent.

But we're also looking even further ahead. At the upcoming Global Forum on Remittances and Development in Milan, we'll introduce a new objective, the Smart Remitter Target (SmarRT), which will monitor remittance transactions at a more granular level.

The aim is to ensure that in each country corridor there are at least three remittance service-providers who charge 3 percent or less to send money.

To be included in the SmarRT Index, remittance services will need to be accessible on both the sending and receiving ends, and the money will need to be available to recipients within five days.

We will also advocate that at least one service in each corridor be available at a significantly lower price than the average in that corridor. That would make a major difference for many of the poorest remittance senders and their beneficiaries.

Making remittance services work for migrants supports the World Bank Group's goal to achieve Universal Financial Access (UFA) by 2020. The UFA goal envisions that two billion people worldwide, who are currently completely locked out of the financial system, will be able to gain access to a transaction account to send and receive payments and to store money. Access to a transaction account is a step to financial inclusion and can help people improve their lives.

Remittances are often the first financial service that migrants and their families use. A secure and affordable flow of remittances is crucial to empowering working families and expanding financial access.

Once achieved, SmarRT will make it easier for the Moroccan fruit-seller to find a remittance service provider who will charge him 3 percent or less to send money home to his family in Morocco. He will also know that his family will have an easy point-of-access to pick up the money, which they'll receive in five days or less.

All of these efforts are a critical part of the international development community's agenda to reduce poverty and boost shared prosperity in the next decade.