By Brigit Helms and Maggie Dugan

Brigit Helms, the general manager of the Multilateral Investment Fund, also has served as the director of SPEED, a USAID-funded program in Mozambique, and a senior expert for financial inclusion at McKinsey & Company. She has a PhD in agriculture and development economics from Stanford.

The large Mexican city of Guadalajara is a thriving commercial center and home to 1.5 million people. But nearly 24,000 homes in Guadalajara have only a dirt floor and lack access to indoor plumbing and sanitation services.

To tackle the challenge of people living without access to basic services in a large metropolitan area, 25 experts from different professions assembled a few months ago for a 5-day immersive workshop called a "Sandpit," held in the community center in Guadalajara's neighborhood of Zapopan.

The challenge: How to transform marginalized neighborhoods into smart ones? In other words, how to use technology to change and improve the quality of life in neighborhoods like Zapopan, one of the poorest in Guadalajara?

The prize, for projects deemed the most innovative on the last day: up to $3 million in funding.

The Sandpit is a unique methodology, originally designed to produce innovative ideas to solve scientific problem. These problems require multi-disciplinary attention and expertise, and yet the training that scientists undergo to become experts is becoming ever more specialized and narrow in focus. A U.K. funding agency, the Engineering and Physical Sciences Research Council, noted this trend more than a decade ago, and set out to help scientists produce collaborative research that's innovative across disciplines.

The workshop in Zapopan was organized by the Multilateral Investment Fund of the Inter-American Development Bank Group, in partnership with the Mexican state of Jalisco; the public planning agency for Guadalajara, Imeplan; and the private company Cisco. The event was facilitated by Knowinnovation, based in the United Kingdom and United States, which had worked for the U.S. National Science Foundation on similar events, known as Ideas Labs.

Whether you call it a Sandpit or an Ideas Lab, the methodology does the same thing: it mixes people of different disciplines or professional perspectives to generate provocative discussions that redefine challenges and produce really new ideas. 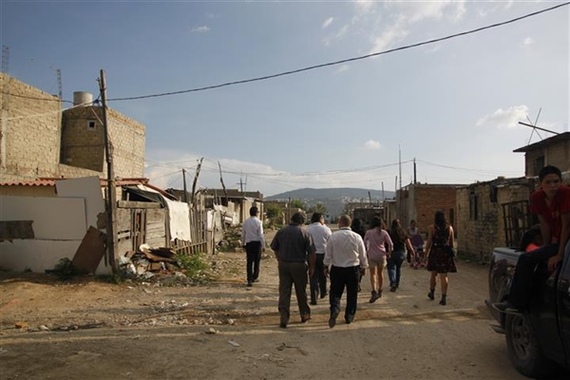 For examples, consider the two winners of the Zapopan Sandpit:

Ruta SOS seeks to help migrants look for and identify job opportunities by region. This will be done through aninteractive Web platform that gives migrants information not only about jobs, but also about services and housing--both where they are and where they are heading.

Decentralia aims to use affordable rainwater storage, plus a technology and financing package, to produce water, energy, and financial savings for households and cities. This will help address the stress on the water supply in Mexico.

Knowinnovation had been running Sandpits and Ideas Labs for a dozen years, covering topics from protecting data privacy, to re-engineering photosynthesis, to determining the origins of life on earth and in space. For this Sandpit, the challenge was to make the methodology designed for scientific problems work for an economic development problem.

In the end, the Zapopan Sandpit produced five innovative project ideas, with the two described earlier given a green light to develop further.

But it was a different animal than the Sandpits that Knowinnovation had facilitated with science funding organizations like the National Science Foundation, NASA, and the Engineering and Physical Sciences Research Council. Here's how the Zapopan Sandpit was different:

Knowinnovation made a point of including people in the process of innovation who are normally excluded, inviting two individuals from the community to the Sandpit. The group found common ground with these special participants, and not only were both individuals fully involved in proposal groups, but they also were constantly consulted to test and validate ideas. Furthermore, these participants were engaged in the solution that could affect them directly.

This is a word we made up to convey one of the principle concepts of a Sandpit. The Sandpit uses an iterative approach: each time a group presents its thinking, the other groups give feedback--highlighting the positive attributes and pointing out, constructively, the problems or gaps in thinking that must be addressed. In this way, every participant's fingerprint is on every project, and the entire group, while competing for funding on individual projects, is also working in solidarity to solve the overall problem.

This is a delicate balance, and it's worth noting that in the academic and scientific domain, the participants do cooperate, but they also compete aggressively. The group of participants at the Zapopan Sandpit--perhaps because so many came from the world of social entrepreneurship and economic development--walked the talk when it came to being inclusive. They bonded in their groups and wanted to stay there, resisting even when the mentors--a team of subject guides whose role was to give the group advice--suggested that the groups split up or take their projects in a different direction.

At one point, a community participant took offense. It was difficult moment; we had to navigate a misunderstanding about the key terminology--smart and marginalized. But we soon realized that these words have an edge to them, and that one of the keys to being inclusive is anticipating sensitivities to the terms that we use to describe these challenges, and making sure the definitions are clear, and appropriate, from the start.

It's not uncommon at a Sandpit for groups to work until the wee hours of the morning leading up to the final presentations on the last day. The groups at the Zapopan Sandpit put in the extra late-night thinking needed. But the pressure was on. Unlike typical Sandpits, where the mentor team morphs into decision makers at the end of the session, this Sandpit brought in outside evaluators for a final presentation. The groups had to make the case for the proposals to a panel of judges who had little context for how the projects had developed in just a few days.

In the end, the three groups that didn't advance expressed something we often hear: they were still excited about their projects and hoped they might be funded by other sources. They knew they had participated in an event that could have an important impact on the poorest urban neighborhoods in Guadalajara, and potentially in other urban centers around the world. That's something smart to be proud of.

Maggie Dugan is a workshop facilitator and trainer who specializes in events that spur innovation. She is on the facilitation team at Knowinnovation and head of its newest division, Inclusive Innovation, which uses the same methodology to accelerate breakthroughs in economic development.