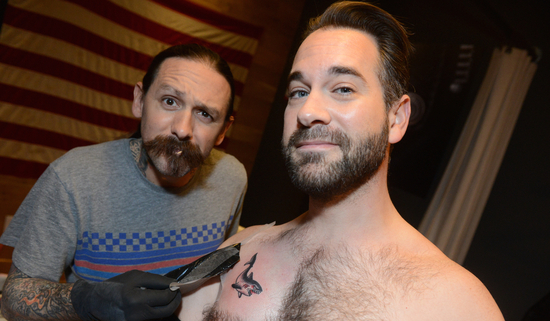 On Tuesday night, celebrity tattoo artist Oliver Peck was going live for the Season 6 finale of Ink Master, the Spike TV competition series he stars in, along with Dave Navarro and Chris Núñez. And on Wednesday night, this world-renowned creator and Guinness Book of World Records holder had me in the chair in the back of a New York City leather goods store getting a Sailor Jerry design tattooed on my chest.

And I should mention it is my first tattoo ever.

The scenario is one of many surreal experiences that plays out in my life. One moment I'm heading to Schott NYC, in the NoLiTa neighborhood to check out the unveiling of a new peacoat from the Sailor Jerry clothing line. The next, I'm getting an old-school SJ shark inked on my pec.

According to a May 2014 NBC News/Wall Street Journal poll, 40 percent of Americans have someone in their household with a tattoo (up from 21 percent in 1999). Now I'm one of them, and wanted to share my thoughts.

I don't know how high up there this ranks, but there is a temptation with life experiences to feel like you're the first person ever to endure a scenario. We really like to talk about it as if no one else has ever gone through the exact same thing. Ask anyone who recently had a baby, then talk to all the people around them who have to hear about it as if they just gave birth to the first human.

I want to avoid that pitfall, but still, as a mid-30s tattoo virgin, it already feels like a pretty cool moment less than 24 hours after it happened. And I suspect there are others out there wondering whether to pull the trigger on their first ink, but haven't -- maybe because they don't know what to get and meaning it should have, or are concerned about pain, or, like me, just simply haven't gotten around to it.

The shark tattoo didn't have a lot of particular meaning for me -- initially. I have always been a child of the ocean, and love sharks despite being bitten by one as a child. And Jaws is one of my favorite movies. And come to think of it, I'm a fan of tiki bars, rum, and the laid-back but salty attitude conveyed by nautical images. (OK, so maybe I put more unconscious thought into this than I realized.)

Still, I didn't think about needing a meaning. That was good for me. Instead of wringing my hands over a quotation, or someone's name, or a symbol of special significance, the choice was spur of the "Why not/what the hell" moment. It seems like it is easy to get so caught up in the decision, one works themselves into a state of indecision.

Curiously, for me, not dwelling on meaning adds more importance to the moment itself, and the context in which it was done. Now I have this piece of work on me from two masters, Peck and Norman "Sailor Jerry" Collins (who was a big deal and innovator in the tattoo world before the rum bearing his name was created).

As for pain component, yeah, it hurt. However, the stinging needle sensation wasn't excruciating. Peck had a fairly light touch, and it moved quickly. Plus, the chest is not one of the more sensitive areas for a tattoo, such as a boney zone. I expected pain, and more of it. But it is not unbearable, and not to sound entirely masochistic, but the pain made the experience feel earned, and more memorable.

It also frankly helped how attentive to cleanliness Peck was; not that I was scared, but his fastidiousness put me at ease. That is something some tattoo veterans I know told me to look out for in future sessions.

The end result is not unlike committing to that leather jacket, or going with a new 'do. True, this tattoo is for life, but it's reflective of who I am today, in this body, with this look. It is part of my personal style, contributes in some form to how I feel about myself. If I ever regret it -- not likely, considering I am pretty much as fully formed as I'll ever be -- it will be no more embarrassing than old yearbook photos. The exception is those photos weren't shot by a team-up of Ansel Adams and Annie Leibovitz, and this tattoo comes courtesy masters of their medium.

Will I do it again? Right after it was complete, I had a celebratory drink of rum and ginger, and yes, bought a leather jacket. I don't think this means I'm turning to a life of stealing motorcycles and knocking over liquor stores. But it was invigorating. Things have calmed down the morning after; I removed the bandage I wore overnight, gently washed over goopy ink and blood remnants, then applied ointment.

I have to take care of my shark, who I have named Bruce, and see if I'll be up for another. Right now, I think maybe I'm set. After all, by getting Peck to do Sailor Jerry on me, I started at the top.

But everyone tells me it is hard to stop once you begin, and I have already been checking images online of anchors. And hula girls. And maybe a snake...

More:
Styletattoos
Newsletter Sign Up
An essential daily guide to achieving the good life
Subscribe to our lifestyle email.
Successfully Subscribed!
Realness delivered to your inbox