When I was 13, I was kicked in the solar plexus. It was during a karate class in 7th grade and the girl I was sparring with delivered the roundhouse kick a bit stronger and faster than we were supposed to. It knocked me down and I gasped for breath, feeling like I had been shot. The sensei came over to me and reprimanded my partner while explaining to me that I had "gotten the wind knocked out of me."

And he was right. Quite literally, in fact. I couldn't breathe.

But he also told me just to breathe, lift up my hands and take huge gulps of air, even though it was difficult. I did what he said and soon enough, the pain went away, I was breathing normally, and could continue with the class. No bruise. No residual effects. No broken ribs. I stepped back in the ring and continued to spar.

I just had a similar experience. 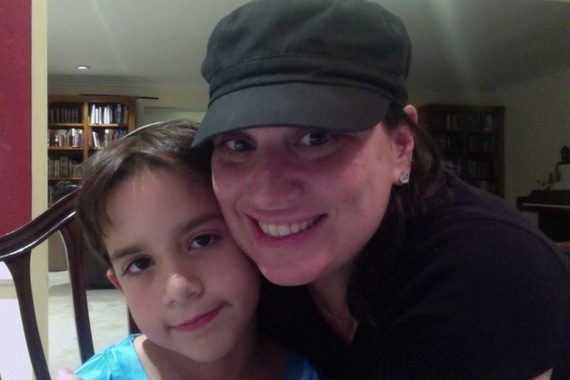 Hearing that your son has a brain tumor knocks the wind out of you in a completely different way. I didn't fall to the floor and clutch at my chest. I wasn't gasping for air. But I felt that sharp stab of pain, that helpless "I think I might die" feeling as real as if I had been punched in the chest. Suddenly I was reeling, and the more they repeated the findings, the further away from reality I felt myself.

It could not be true. There's no way. Not now. Not him.

I just spent a whole year telling my son that there was no way he could catch cancer. That what happened to me would never happen to him. And there I was, in the ER on a Friday, getting called out as a liar. Because the boy who should never have gotten a tumor, suddenly had one.

I was hit again and again that evening. Watching him in an MRI machine, watching him get a CAT scan, getting an EEG, getting gifts from well-intentioned nurses and friends. Each blow knocked me down, knocked me to the floor like that roundhouse kick in 7th grade, knocked me into a reality I was not prepared to face.

My sensei was right, though. I had to breathe. So I concentrated on that. Just inhaling deeply, lifting my arms up over my head, and breathing through everything that happened that weekend. Breathing through the blows as they came again and again. It was like childbirth. All I had to do was get over that jolt. Get my wind back. Breathe deeply and fully so I could stand.

We were guided by top neurologists and neurosurgeons. We surrounded ourselves with professionals. I read medical journals written in a language that was clearly English but with vocabulary so over my head that, like a child, I just looked at the pictures. I compared them to my son's MRI images, trying to get some idea of what we were in for.

We were enveloped by friends and family and told over and over again to just breathe. Just take steps. Stop thinking about worst case scenarios. Trust the doctors. Trust the surgeons. Trust in God.

And while we were getting the wind knocked out of us, we discovered we weren't alone.

Thousands of people joined us to pray for our son. To do good deeds. To respond to this terrible blow by creating more light in the world. While we sat in that Pediatric Surgical Waiting Room we read post after post from strangers and friends alike. Posts that reminded us to breathe and take big gulps of air. Posts that told us that as worried as we were, as terrifying as the situation was, we would be okay. My son would be okay.

Every step was difficult. Every "what-if" debilitating. But he made it through.

He opened his eyes after that grueling eight-hour surgery and asked for a cup of water. He even cracked a joke that night in the ICU. As we crossed each hurdle we shared it with the people who carried us through. "He woke up!" "He spoke!" "He ate food!"

Each tiny step was another deep breath that lessened the pain and the worry. It allowed us to stand up again. Get our wind back.

I was asked how I could deal with this so soon after my own health issues last year. I guess I learned how back in 7th grade. When you get kicked in the chest, when the wind gets knocked out of you, you just breathe.

And then you step back into the ring.

More:
cancer brain tumor neurologyParentsmri
Newsletter Sign Up
Raise the kind of person you'd like to know
Subscribe to our parenting newsletter.
Successfully Subscribed!
Realness delivered to your inbox