When I first had the idea for my Astro Hero series the New Moon had just begun. This was on June 10, 2010. Of course, I noticed the date because I wanted to use the moon's energy to boost my energy and creativity. And you can too.

Whatever your idea or goal is begin any project at the beginning of the lunar cycle, i.e. a New Moon. In the sky we cannot see the actual new moon until it becomes a sliver of light then over 14 days the moon grows in size and brightness until it peaks at the Full Moon. This waxing and waning of the moon happens every month. If we follow this moon power rhythm we have more bounce, energy, and flow. Let me give you an example of how this works.

Shortly after that June New Moon I wrote the outline of a story about 12 kids, each born under a different astrological sign, who become Super Astro Heroes. I wrote in the morning consistently from the New Moon until the Full Moon. Practically every month afterwards, the New Moon found me pounding away at the keyboard. There were a few interruptions for colds, family matters, and work but I kept to my idea and after six months had a manuscript.

Then came phase two. What to do with this story? I thought the story was very visual and would make a wonderful graphic novel. Problem! I can't draw.

For a couple of new moons I searched for artists and through some lucky connections found my artist, Jai Granofsky. You can see his terrific art here and in blogs to come. I also met another artist, Israel Peak, who helped me storyboard and make thumbnail sketches.

Now we had the team but the money? The lunar cycle gets you going and helps ideas flow but manifesting anything requires more than moon power. Saturn, planet of detail, structure, and reality was my guide here. I turned to the crowd funding platform, Kickstarter.

On the new Moon in May, 2013 we went live with our project funding page. I emailed, tweeted, called, and spoke with everyone I knew. The campaign lasted exactly one month from New Moon to the next New Moon and we raised our target amount plus. In addition to moon power, I am eternally grateful to all my backers. They not only contributed money but creative ideas. Some of their terrific suggestions for their Astro Hero's costume, as well as special weapons, have been incorporated in the story.

How can you use the moon's power? It's simple. Begin new projects at the New Moon. Take a look at a calendar or consult www.lunarium.co.uk and find out exactly when the New Moon occurs. Make a wish list of whatever you would like to initiate in your life: a new sofa, a new relationship, a new job or a new general goal. Perhaps you won't take action every New Moon but recognizing what you would like to activate counts as a beginning. In the 2 weeks that follow the New Moon (until the Full Moon), work on your project. Then after the Full Moon let things simmer. You will come back to the active phase with the next New Moon. 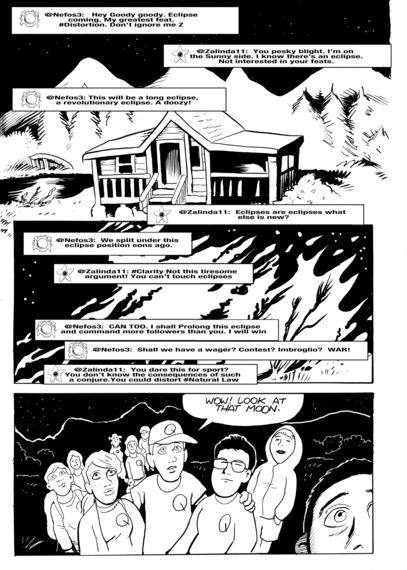 Last blog you saw the beginning of the series Tree of Keys and met Nefos and Zalinda. Here on page 2, these two are setting up a plan to control and use Moon Power. The plot thickens. If these two fictitious characters can move the heavens for their own design, imagine what you can create in your own life?

The next New Moon will be on September 13th plus an eclipse! Make your wishes and intentions clear and watch how they grow.